Vagabonding across the 39th Parallel: A Little Mystery on the North Rim

A little mystery question for the day...

Last July Mrs. Geotripper and I embarked on a vagabonding adventure across the 39th parallel through a number of southwestern states, and we made our rule to not make plans more than a day or two in advance. That meant we often ended up in places that were full of unexpected surprises and delightful scenery. Sometimes there was sadness, as when we saw mile after mile of exfoliated forests in central Colorado. 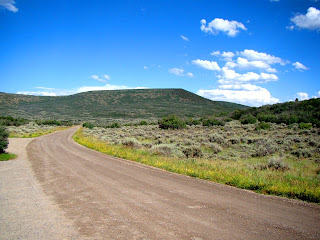 On this particular day we reached a road and a place that I had never before been. It was the North Rim of a national park, and at this particular national park, the North Rim receives far fewer visitors than the South Rim. It's a really deep canyon, the interior of which contains some of the oldest rocks to be found anywhere in the southwest. Those older rocks are overlain by horizontal sequence of much younger sedimentary rocks. The boundary between the two is a profound unconformity representing the passage of more than a billion years.

So the mystery of the day is: Where in the world were we? 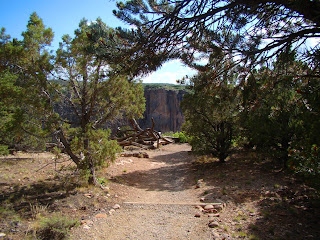 Here is your clue, a path leading to the edge of the precipice.
Posted by Garry Hayes at 6:47 PM

I think you must have been at the Black Canyon of the Gunnison National Park, in Colorado.

Maybe a slip, but I suspect we geologists appropriated the word 'exfoliate' from the botanists...

As other comments noted its the Black Canyon of the Gunnison. Note the reason it is so little visited is clear from the first picture, no paved road goes there.