How to tell if an Internet Prediction of an Imminent Earthquake is Credible... 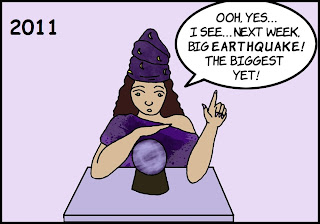 The answer is easy: It is NOT CREDIBLE..

It's sort of like asking how you know a politician/car salesperson is lying (answer: their lips are moving).

Apparently a great many tweets have been generated by the prediction of an earthquake in Berkeley, and people are concerned about it (a typical story here). The predictions are garbage. One can make numerous predictions about quakes, and eventually some may come true. And a broken clock is right twice a day.

This isn't to say that a quake won't happen while you are reading this. It could happen. That is a great reason to prepared at ALL times (extra water, food, radio, flashlight, batteries, first aid kit), especially in California and the Bay Area along the San Andreas and Hayward faults. But no one is capable of predicting such quakes in advance, and it doesn't matter how "scientific" their reasoning sounds. No planetary alignments, earth tides, uneasy animals, nothing.

Foreshocks are possible harbingers of a larger quake, but there is no way to tell a foreshock from a main shock. And many big earthquakes happen without foreshocks.

It just can't be done, so don't be misled by Internet quake predictions, and for that matter, psychic predictions (you can read what I said about them a few weeks ago in this post).
Posted by Garry Hayes at 4:54 PM