Vagabonding Across the 39th Parallel: Sun and Rock in Arches National Park 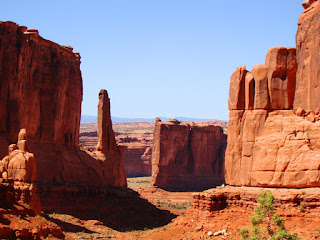 Last summer we set out on a vagabonding journey that roughly followed the 39th Parallel across the western states of Nevada, Utah and Colorado. By vagabonding, I refer to the set of loose rules we followed to not plan more than a day or two in advance, and try to see as many new sights as we could see. We ultimately made it to Rocky Mountain National Park, and now after 10 days on the road, we were headed west, slowly returning home to California.  Our winding road brought us to the town of Moab, Utah, and Arches National Park. We were now on the Colorado Plateau, a vast area of the earth's crust that was stable for hundreds of millions of years, but in recent geologic time has been uplifted and deeply eroded by the Colorado River and her tributaries.

I've been to Arches National Park a great many times, but almost always with a large group of students. A group necessitates some serious planning, and our trips usually include the same three places: a hike to Delicate Arch for the sunset, a hike to Double Arch, and a hike to Landscape Arch, the largest in the park (and probably in the world). On this particular day, our new experience was stopping and sitting at one of the less iconic viewpoints. Literally sitting, for a rather long time. We had a picnic dinner, and just experienced the desert while the sun set behind us.

Before settling in, we made a quick circuit past the La Sal Mountains overlook and the Windows Section. The La Sal Mountains are outside of Arches National Park, but provide a spectacular backdrop to arches and fins that make up most of the scenery in the park. The mountains have an unusual origin. They are not quite volcanic in origin (although volcanoes almost surely existed here, but have been eroded away), but instead are formed of intrusive rock that reached shallow depths in the crust, wedging and bulging up the sedimentary layers that lay above the molten rock. The intrusions are called laccoliths. The mountains rise to 12,000 feet, and are often snow-covered, even in early summer. 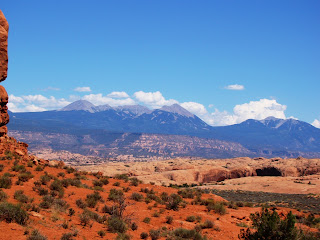 The Windows Section contains several large arches, including Double Arch, made famous by the opening scenes of Indiana Jones and the Last Crusade. There is no deep cave up in the alcove, and no Coronado's Cross, though. Just a spectacular double arch. It's big; click on the photo below and look for the people walking under the arch. 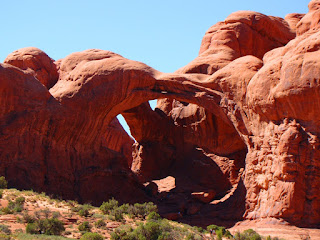 The Windows Section is a good place to learn the stratigraphy of Arches National Park (see the picture below). There are three important sedimentary layers that are fundamental to the scenery, all Jurassic in age. The Navajo Sandstone is the preserved remains of a vast dune sea (an erg) that developed along the western edge of the supercontinent Pangea. It makes up much of the spectacular scenery at other parks like Zion and Capitol Reef, but is less visible in Arches. It makes up the lighter-colored layer at the base of the slope in the picture below. 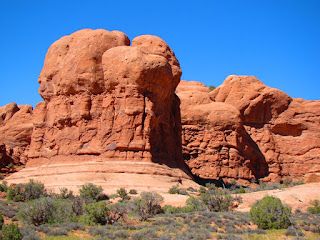 The layers atop the Navajo Sandstone are two members of the Entrada Sandstone: the Dewey Bridge member and the Slickrock member. The Dewey Bridge formed in a tidal flat environment and has variable layers of siltstone and sandstone. It is easily eroded, which allows it to undercut the harder Slickrock member, causing the cliffs and fins in which the arches are developed. It often has a wavy "crinkled" aspect that has led some geologists to speculate that the layer was affected by the nearby impact of an asteroid at Upheaval Dome. The speculation is controversial, but the explanation appeals to me simply on the scale of grandeur and in thinking outside the box. 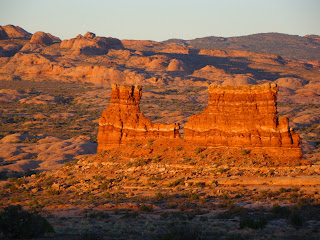 
"The origin of the park's famous arches (there are hundreds) is tied to the salts of the Paradox Basin. The salt beds are thousands of feet thick, and when placed under pressure, can slowly flow upwards through the overlying rock, forming domes and anticlines (upward pointing folds). Over millions of years, erosion removed thousands of feet of overlying sediment, and the salt was close enough to the surface to be affected by groundwater: it was dissolved away. The tops of the folds collapsed inwards, and the Entrada Sandstone was fractured (jointing) into a series of parallel fins. A large northwest trending anticline crosses the park; most of the arches occur along the flanks of the anticline.

The top of the fins are exposed to the arid desert climate, where the rock dries quickly following the infrequent storms. At the base of the fins, where the rock is buried by soil and loose sand, the rock may stay moist much longer. This leads to the solution of the cement holding the sandstone together, and the fins start to weather from below. Eventually a small window may open up, and falling slabs of rock enlarge the opening." 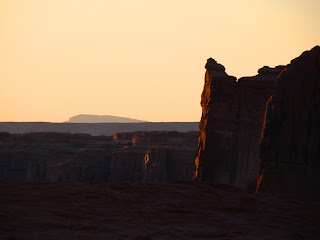 The sun was sinking lower towards the horizon. We sat in the silence and ate our sandwiches; a few cars stopped briefly and people stepped out to see what we were looking at, but they were mostly in a hurry to be someplace else. 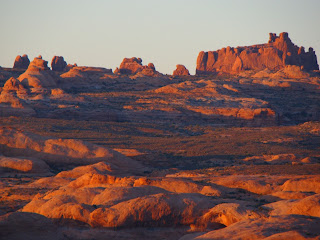 Arches is an elemental place, as most desert landscapes are. There is sunlight, and there is rock. Everything else is secondary, the plants, the animals, the people. If you are caught in the open on a hot summer day, the elements are perilous. Survival is a crapshoot. In our insulated existence, the crapshoot becomes a source of great beauty, especially as the sun sinks and the searing heat dissipates. The rocks glow, and then slowly fade to darkness. 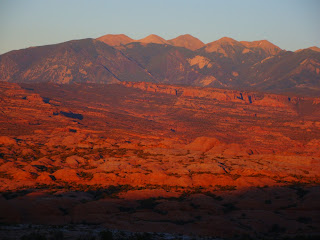 Our minds see meaning in the random shapes of the rocks, and we make stories of their origin. Some stories involve myths and heroes, while others involve jointing and frost wedging. I enjoy both kinds. What do you see here? 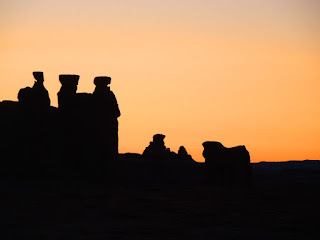 The fire in the sky died away, and stars emerged in the darkness. We gathered our things and drove back into town. 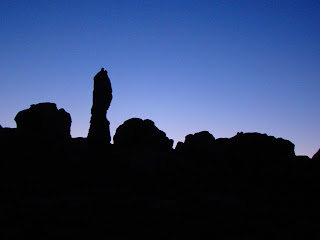 Erosion shows the spirit of the rock people to me.

The second to last picture reminds me of the Christian story of the three Wise Men visiting baby Jesus in the manger.

Husband and I visited Moab a couple of decades ago, but I remember just fragments of the visit. We went to Arches, and were dismayed by the crowds. We went to Canyonlands, and were awed by the scenery. Then (we had a 4WD Toyota) we took the unpaved back roads back to Moab and were amazed at how the rocks looked up close. It set one of the seeds in my mind that culminated years later in choosing to go back to school and study geology.

This place looks so amazing,i wonder how hot it gets at day and how cold it gets at night!

Summer temperatures exceed 100 degrees every so often, but it is high desert (around 5,000 feet), so it gets plenty cold in winter, and occasionally gets a dusting of snow.

Hello, I live in Moab and am a graduate student in geology at Utah State U. I'm also a writer and photographer.

You've done a beautiful job of capturing the essence of Arches NP. I would like to mention one correction, however, which is a common mistake. The literature has for many years incorrectly given the Entrada Fm three members, when it really only has one, Slickrock. The Dewey Bridge member is actually Carmel and the Moab Tongue is Curtis. Robert Fillmore sets the record straight in his fabulous recent book, "Geological Evolution of the Colorado Plateau of Eastern Utah and Western Colorado." He also cites recent evidence re. Upheaval Dome, and it is indeed an impact remnant. Your assessment of the Dewey Bridge ripples are correct. Think shocked quartz for evidence. I found it interesting that what a lot of people think is Paradox Fm in the center of the dome is actually bleached White Rim SS.

Hello anonymous! I was somewhat aware of the change in stratigraphic interpretation of the Entrada Sandstone, but I couldn't lay my hands on the recent literature in order to confirm it while I was rapidly writing the post. Thanks for the correction.