A Cold Day in the Zoo Facing our Animality

I haven't been to a zoo in a decade at least. I like animals and all, but I usually find zoos kind of depressing, like a sideshow at a circus. I know that zoos are trying to change that, and that exhibits these days try to reproduce an animal's natural environment as much as possible. No zoo is completely successful at this, but one can see that some are committed to trying. Still, it is hard not to see the animals on exhibit as a sort of Victorian statement of human superiority over the savage beast. On the other hand many of these animals are incapable of survival in the wild, or their "wild" has been destroyed by human encroachment.
Still, I don't really like the idea of zoos, but I may never have the chance to travel to Africa or the Outback to see these animals in the wild, and TV can, in its rare fine moments, present animals in spectacular fashion, but with no sense of personal interaction. So zoos are it. I responded to a relative's birthday request by taking him to the zoo in San Francisco yesterday (he's 26, but he's also an anthropology graduate student; he takes to the primate center the way I take to dinosaur and mineral exhibits in museums).

Something happened that has never really happened to me before. It was the gorilla compound...one of the younger gorillas was interacting with the zoo visitors. That was new to me; most animals don't seem to note our existence unless they see us as a threat. I'm not used to the idea of maintaining eye contact, and making symbolic facial expressions and hand motions. But it was happening this time.
I know I'm not supposed to anthropomorphise the actions of animals that have no real mental connection to us (dolphins aren't smiling all the time), but that's the thing: gorillas are among the creatures most like us. I felt a connection with this young animal that I never feel with cats, dogs, or birds. I look at these pictures and I can't help but feel there is a very close kinship with these primates. 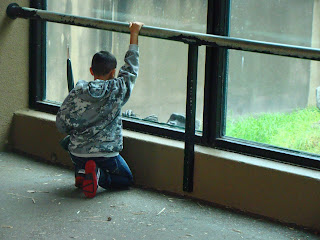 In a movie, this is a terrifying moment. The kids didn't know what to think for a second. 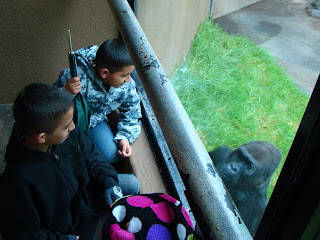 There were some stares back and forth. 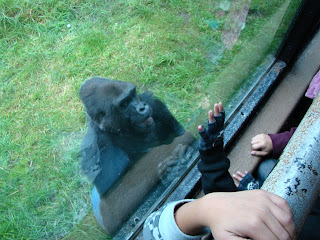 Then there was some kind of communication with the hands... 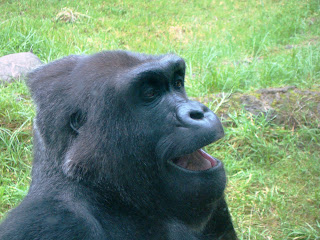 Again, we aren't supposed to anthropomorphise the expressions that we see in animals, but try telling me that these aren't expressions of interest and curiosity, maybe even a bit of levity. 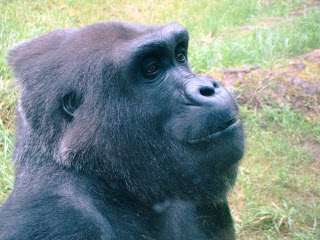 At this point, I didn't actually realize the trouble the gorilla had gone through to make contact with the kids. I stepped away and saw that the young gorilla had moved a big ball against the wall and was standing on it. 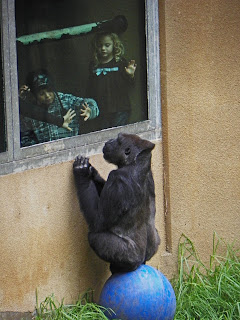 I start contemplating humanity, and consider what we have done with these creatures. We kill them and eat them. We make table top curios out of their hands and heads. We brag about shooting these ferocious beasts on jungle safaris (I know not so much anymore, but poaching continues unabated). 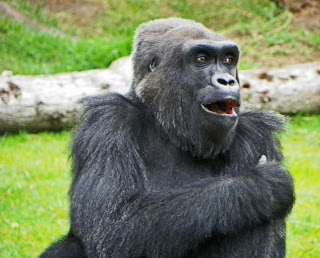 We talk about "beastly" behaviour, but who is more beastly? 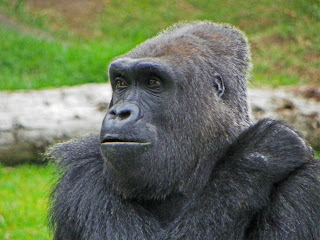 These are among the animals closest to humans in their evolution and genetics. Whenever I hear some television preacher or conservative politician exhorting how they refuse to believe we descended from apes, I think what is the problem with that? These primates are a fascinating look into our own past. Of course, then I throw something at the TV and say "You are wrong! We descended from a common ape-like ancestor! And it's not a matter of 'belief', it's based on overwhelming evidence!" 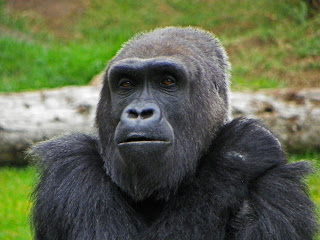 I know that I am not the first person to ever think of this sort of thing. There is this whole science called physical anthropology that has documented our relationships with these fascinating creatures. My son the graduate student never lets me forget! 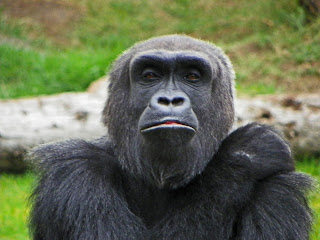 And after looking into the eyes of this individual conscious thinking being, I'm not going to forget. 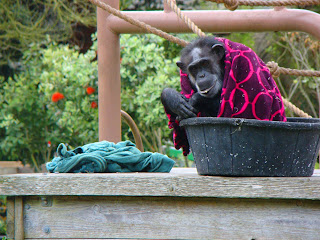 By the way, did I mention that it was cold in San Francisco yesterday? The chimps took matters into their own hands to stay warm...

Many thanks to Mrs. Geotripper who took most of the pictures for today's post.
Posted by Garry Hayes at 5:39 PM

Many animals do seem to react favorably to children - ever watch a two-year-old drag an uncomplaining cat around like a rag doll?

I wonder how long that particular chimp has lived in the zoo... and whether it wondered if the hands and eyes on the other side of the glass were in need of its sympathy.

Her name is Zura, and she is not a young gorilla after all; she's 29 years old.

I too have problems with zoos and even though I once worked as an animal keeper and felt honored to be in the animals presence yet sad because they were there.

How can anyone watch the animals, and in particular the primates, and not feel their spirit.

Fascinating. How anyone can look at those amazing individuals and deny a HUGE overlap of DNA is beyond me. Giant case of self-serving denial, IMHO. =) Thanks for sharing.

Great pictures my friend! I like the comment about the gorilla having pity for the faces on the other side of the glass...in our concrete jungles and metal boxes. I would think that a primatre raised in captivity would react to the facial expressions of humans much more differently than those from the wild...case in point. Baring teeth in the wild is an aggressive act, but humans smile, and it appears this gorilla returned the gesture. She sure did want to get closer to see what these funny hairless monkeys were doing huh? I keep meaning to take my kids to the SF zoo really soon, and these pictures reminded me why. Thank you.

Garry, you must know how gratified I am to see your comments... I have found 'Humanity' in so many fine critters. For those of us who can and DO spend countless hours in observation and study of the 'lesser' creatures 'God' gave us; (and BTW I am a christian who knows science does not have to conflict unless you're inflexible in your beliefs and not open to the facts) What a wondrous wealth of reality animals offer us if we only care to see. If we continue to destroy our natural world and the animals, birds and insects that populate AND POLLINATE nature's miraculous factory of medicinal marvels, we will lose our foothold as the dominate species and to right we should!

Love you guys and glad you had such a profound and meaningful critter moment.... maybe you won't shake your head so hard at me next trip!! lol