Dispatches from the Road: Scenes from Kona 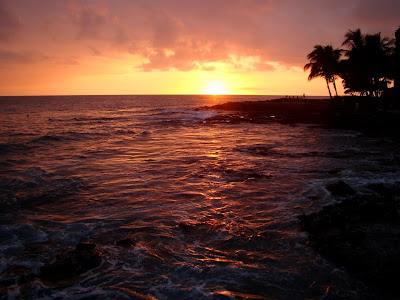 If I seem to have been missing in action, well, no, I was missing in inaction. After the lava adventures at Kilauea a few days ago, I went north and west on the Big Island seeking serenity and peace, and the green flash. Catching the green flash is not the pathway to serenity though, because something will go inevitably wrong, and there will be curses flung. The green flash is an optical phenomena that occurs when the sun sets on a clear horizon, and light gets bent through the atmosphere. The last split second sometimes reveals a moment of green light that can be hard to catch. I seemed all set to catch it with these shots, but then the autofocus went out of focus at just the moment the green flash would have happened, except I was looking at an out of focus screen instead of the horizon. But so what? I'm still in paradise and the sunset was gorgeous anyway. If you want to see what a green flash actually looks like, I posted an example taken by a friend a little while back... 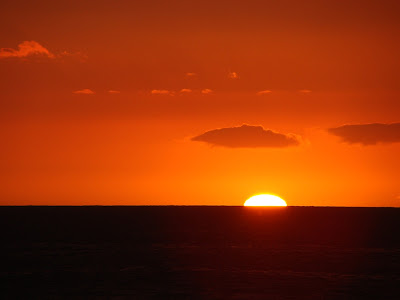 It is beautiful out here. I will have a few pictures up soon; my internet access has been spotty (well, no, not really, I was just ignoring it...). Here is a gratuitous flower shot from a tropical woodland called the Cloud Forest. There is a road that shoots straight up Hualalai volcano from Kona, climbing from sea level to 5,000 feet in a really short distance (better appreciated when trying to drive back down without burning out the brakes). The temperature went from 83 degrees to 57 degrees on the climb. 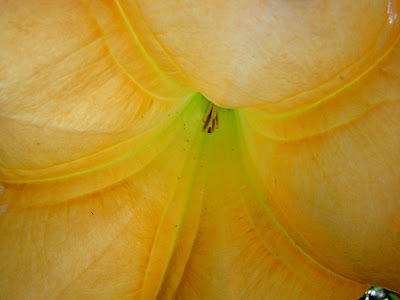 Kind of reminds me of a Georgia O'Keefe painting. Nature is a great artist...
Posted by Garry Hayes at 1:02 AM

All these images look surreal to me, maybe cuz I've never been to Hawaii. Too bad about missing the green flash, but if the vacation isn't over you could try again. Enjoy!