Searching for a Coronal Mass Ejection.... 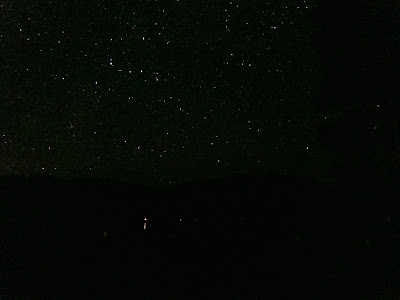 No, I didn't find any. I'm in Central California, and most of the reports of auroral displays are coming out of the northern tier of states. For instance, this picture from the Great Lakes area was posted at SpaceWeather.com.

What I did in fact do was to grab some folding chairs, drive up out of the dusty hot Central Valley, and set up shop on the shoreline of Pinecrest Lake at about 6,000 feet in the Sierra Nevada just north of Yosemite National Park. We sat on the quiet lakeshore, watched the last beams of sunlight on the high peaks, waited through the deepening twilight until thousands of stars were visible, along with a bright Milky Way. Bats flew within inches of our face while we scanned the sky for three hours waiting for the promised show as solar particles bombarded the Earth's magnetic field and interacted with gas molecules in the uppermost atmosphere. We waited for three hours and nothing of the sort happened at our latitude.

A waste of time? Let's see, after a summer of grant writing and crazy politics, I estimate my blood pressure dropped 30 points. One of the few Geotripper's Laws: watching the sun go down on a mountain lake is never wasted time.

But I wanna see pictures from you folks in the higher latitudes!
Posted by Garry Hayes at 1:26 AM

No light show here either. But it's never a waste of time to watch the night sky. Now if it would just clear up enough to see the stars.

Nothing from my area yet, but I hear tonight and tomorrow (Wed and Thurs) are supposed to be stellar for the aurora. I'll share photos if I see anything from Victoria, BC, Canada.

Well, Darksyde says tonight might be the night. Being the eternal hopeful fool, I'll be checking it out, but maybe in the backyard.http://www.dailykos.com/storyonly/2010/8/4/890114/-Solar-tsunami-may-offer-rare-glimpse-of-aurora-in-lower-48-tonite?utm_source=feedburner&utm_medium=feed&utm_campaign=Feed%3A+dailykos%2Findex+%28Daily+Kos%29

No luck for me! Too much smoke from the forest fires, so we couldn't even see the stars, let alone the twinkle of the Aurora. Oh well, maybe next time.