The Power of Words: The Debate over Serpentine in California 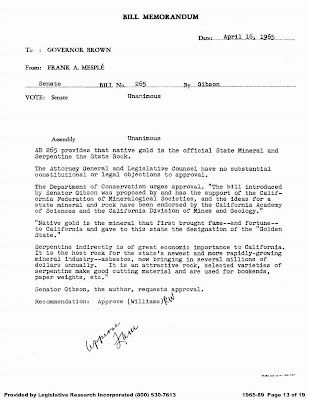 Oh, the power of words. What do you think of when you hear words like lobbyist, deadly, carcinogen, asbestos, toxic, no safe level of exposure? Words are used to influence opinion, and we are influenced in many different ways, both consciously and unconsciously, by the way words are utilized.

When I became aware of the effort to remove serpentine as California's state rock (Senate Bill 624), I was willing to accept at face value the accusation that the original bill was an effort by a mysterious "asbestos mining lobby" to promote their business. It made a certain amount of sense that a mining product that was not yet recognized as hazardous should be promoted by a state where ores were found. Now that proponents have posted their evidence of the influence of mining lobbyists, I am having some doubts. First, the accusation:

"Symbolism brings facts to life. In 1965, serpentine was designated the state rock through lobbyist pressure because of the once-lucrative asbestos mining industry in California. Serpentine is a host rock for asbestos, a human carcinogen."

Here is their "smoking gun" evidence. From the memorandum sent to the governor in 1965 (also reproduced above), a government official is urging passage the bill. It is not part of the bill itself. Others have emphasized and italicized the line about asbestos. I am going to italicize the rest:

"The Department of Conservation urges approval. "The bill introduced by Senator Gibson was proposed by and has the support of the California Federation of Mineralogical Societies, and the ideas for a state mineral and rock have been endorsed by the California Academy of Sciences and the California Division of Mines and Geology
....
Serpentine indirectly is of great economic importance to California. It is the host rock for the state's newest and more rapidly-growing mineral industry--asbestos, now bringing in several million dollars annually. It is an attractive rock, selected varieties of serpentine make good cutting material and are used for bookends, paper weights, etc."

Then, there is the complete text of the original law (courtesy of Netstate):

425.2. Serpentine is the official State Rock and lithologic emblem."

Yup. A single line about serpentine. I leave it to you to decide, but if I were a lobbyist trying to promote asbestos mining, I would have tried to make sure that the law actually mentioned the fact. There is nothing in the law that says anything about asbestos.

Even the Senate analysis of SB 624 acknowledges that some doubt exists (the bold text is my emphasis):

"AB 265 (Gibson), Chapter 2, Statues of 1965, established serpentine as the official state rock and lithologic emblem of the state of California. The bill was unanimously passed through the state Senate and signed by Governor Edmund "Pat" Brown possibly in order to encourage the state's asbestos mining industry at the time."

I have dealt elsewhere why the statements in the Senate Bill 624 are inaccurate and misleading. Supporters of this bill constantly refer to the bill's beginnings in 1965 to justify their effort to remove our state rock. It doesn't really matter to me one way or another, because there are so many unique features about serpentine that make it an appropriate symbol, regardless of its origin. But I'm not sure now that their case is so clear-cut.

In the current debate, "lobbyist" is a word used for its negative connotation. So are the words used in Senate Bill 624: deadly, carcinogen, asbestos, toxic, "no safe level of exposure". I want to add some words to the debate that have a positive connotation: rare endemic species, wildflowers, beautiful jade-green rock, Mother Lode history, California's gemstone benitoite (found in serpentine), deep earth processes, ornamental stone. These are what serpentine is to geologists, mineralogists, biologists, environmental scientists, and anyone who is simply interested in a rock that represents a wonderfully unique state.

Thanks to Justin for the catch. 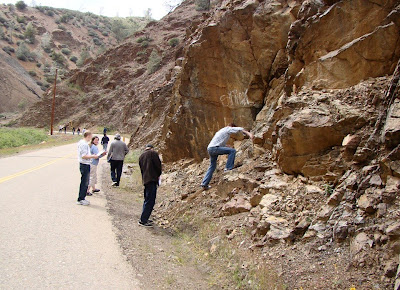 Modesto was smaller then and more liveable than the drek it has become today.