Dispatches from the Road: Now I'm Just Being Stereotypical...and, I have to come home 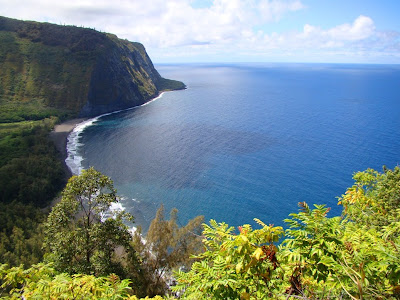 Dang if these trips are never long enough! Hawaii is such a fascinating geological wonderland, but lest you think I ignored the beaches, I can say that in the tradition of the true tourist, I did in fact visit some beaches. I, uh, didn't snorkel, or surf, or boogie-board, and I tended to be picky about the particulars. Not the sand and sun, mind you, but what backed up the beach. The nice ones have cliffs.

The Big Island of Hawai'i is not actually noted for having lots of cliffs, being that many of the volcanoes are still active, and being shields, they tend not to have overly steep slopes. But on the northeast coast there was a massive landslide hundreds of thousands of years ago that formed some of the most scenic coastal cliffs on the islands: Waipo and Pololu.

Waipo Valley, seen above, is a thousand foot deep valley that ends at a black sand beach. It was once as much as a thousand feet deeper, but the island has been subsiding, and the valley has filled with alluvium. There used to be a village on the flats, but most of the buildings were destroyed by tsunamis in 1946 and 1960. A few people live very simply in the valley today. The drive down the road is for 4WD vehicles only. 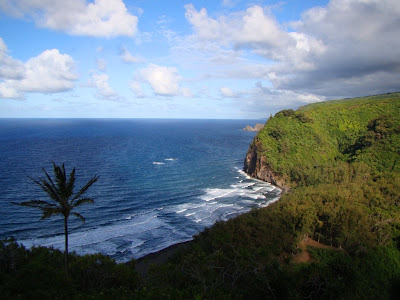 The other beautiful beach is north of Waipo, and is accessed by a road out from Hawi on the northernmost point of the Big Island. A wonderful trail crossed the cliffs, but was severely damaged by the 2006 earthquake 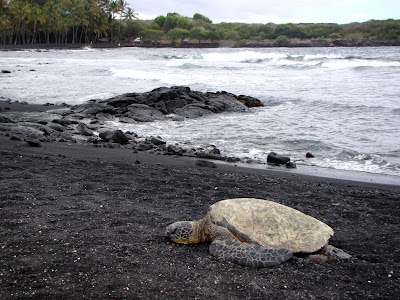 Towards the south end of the island, there is a black sand beach at Punalu'u that is a favorite resting area for sea turtles. Most of the rock on the island is basalt or basaltic glass, hence the occasional black sand. If there are coral reefs and coral-munching parrotfish, the beach sands will be white or tan colored, being composed of small fragments of the coral. The one kind of beach that doesn't occur is a quartz sand beach, as there is no quartz to be found anywhere on the islands, except as an occasional agate filling vugs in basalt flows. In a few instances, olivine is the dominant mineral on the beach, leading to a green sand beach! 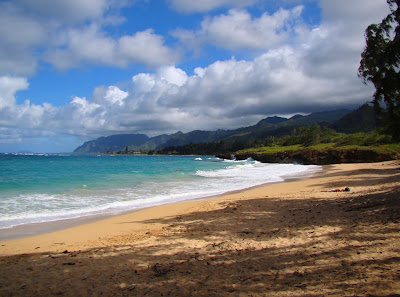 Back on Oahu, there are some beaches that are just almost stereotypically beautiful, especially on the north and east shores, away from Waikiki. The beach in this picture is Lai'e, which is on the close to the northern tip of the island, near the Polynesian Cultural Center. Your impression is correct: no crowds, easy access, and nice shade trees. 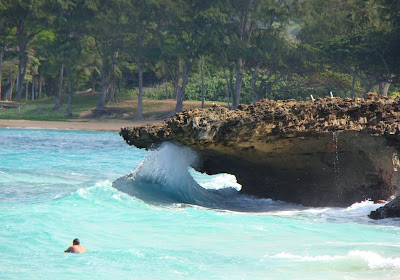 The beach is also called Pounders Beach, probably for what happens if you surf too far to the right side of the beach. Some of the beach sand has been lithified (hardened), and is being undercut by the waves into the striking overhanging cliff (one heck of a wave-cut notch).
Posted by Garry Hayes at 1:42 PM

Hey you just had to be a tourist sometime. And the beaches all look inviting.