The Other California: Cajon Pass and No Strange Sci-Fi Creatures

One evening as the sun went down
And the jungle fires were burning,
Down the track came a hobo hiking,
And he said, "Boys, I'm not turning
I'm headed for a land that's far away
Besides the crystal fountains
So come with me, we'll go and see
The Big Rock Candy Mountains 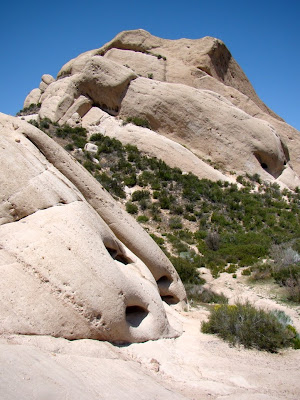 Wow! Thanks for all the guesses and commentary on yesterday's mystery photo. Your answers all made sense, but the winner is the Rock Candy Mountains (also known as the Mormon Rocks).

I grew up in Southern California, and was quite familiar with the Rock Candy Mountains in Cajon Pass, and I thought the rocks were related to the song above, which you might remember from the movie "Oh Brother, Where Art Thou?". I can't find any evidence that they were the mountains of the song, but I vividly remember doing field work along the train tracks, and seeing a dozen men or more riding on each train rumbling down the pass. 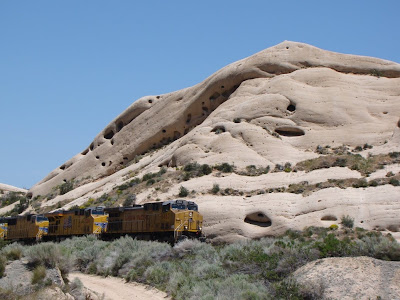 Millions of people see the rocks every year as they speed up Interstate 15 on their way to Vegas or Mammoth, and I doubt that one in a thousand ever stops to have a look. It is worth your time! Cajon Pass is a geological puzzle, complicated by the fact that the San Andreas cuts right through it, dividing the San Gabriel Mountains (below) from the San Bernardino Mountains. 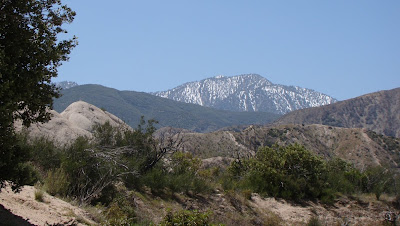 The rocks are Miocene-aged (18-20 million years) gravels and arkosic sandstones of the Cajon Formation, and were deposited in alluvial fans that flanked hills and mountains in the Mojave Block off to the northeast. The rocks have been stressed and twisted into a series of folds in the area adjacent to the San Andreas. During our mapping exercises on the site, I got one of my geological lessons in life: asked to identify the rock in an outcrop, we had a long discussion of whether it was quartz sandstone, arkose, or fine-grained conglomerate. The answer? Deeply weathered granite bedrock, not a sedimentary rock at all (the picture below is definitely conglomerate though; that's a quarter for scale on the bottom left)! 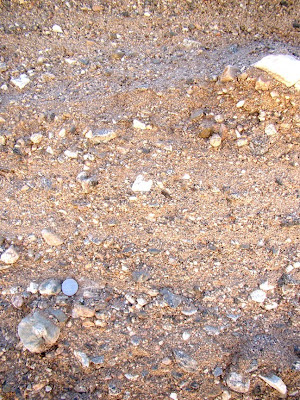 As C.B. and others noted, the holes are tafoni, formed as the cement holding the rock together is dissolved, and wind removes the particles. It feels like the rocks are watching you with hollow eyes sometimes. The small caves and openings are favorite nesting spots for raptors and other large birds. 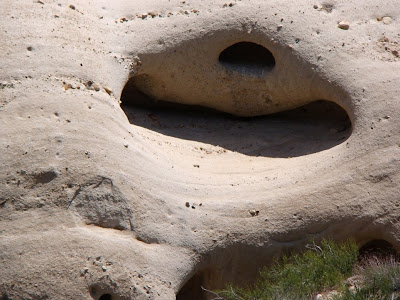 As to the sci-fi reference, I always thought that the Star Trek episode "Arena" with the Gorn had been shot near these rocks, but I thought I'd better check and make sure before I posted the picture yesterday. Sure enough, I was wrong: the episode (and numerous other movie scenes) were filmed at the Vasquez Rocks on Highway 14 between Santa Clarita and Palmdale.

One can certainly argue that the Gorn was not the most ridiculous sci-fi creature ever filmed, but I always thought it looked like a Mardi Gras celebrant who got lost on the way to New Orleans. And then the poor guy got caught in a death match with Captain Kirk...I can hear him now "Hey, I can't get my mask off! Hey, what are you doing with that bamboo and gunpowder?"

The Other California is an ongoing exploration of some of the lesser known geological regions of our beautiful state.
Posted by Garry Hayes at 9:35 PM

Yes, I've driven past these mountains many times and still didn't recognize the place.

(I couldn't remember who the Gorn was until you mentioned the gunpowder scene - that sticks in my mind, along with the rocks in the background.)

I am soooo disappointed in myself, I completely missed the "...place that looks like this" line, or I would have looked more carefully at the photo and seen Mount Baldy in the background. Oh well, it goes to show why some are easily convinced that these areas (Mormon Rocks, Devil's Punchbowl and Vasquez Rocks) represent the same formation, pulled apart by the San Andreas fault...

Now that Ms. Powers has mentioned it, Mythbusters did a segment about the Gorn awhile back, though they filmed it elsewhere...