Dispatches from the Road: Exploring the Ko'olau Caldera 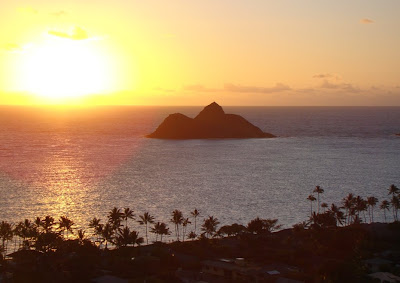 I've always been partial to the Hawaiian Islands that aren't Oahu. I suppose I'm just being snobbish in a geologic way because I feel a visit to the islands is just wasted if all you see is Diamond Head and Waikiki (which is what a great many tourists do). If you want to see a city, well, there are lots of cities all over the world. But there are only a few good-sized Hawaiian Islands. And the scenery on Kaua'i or the Big Island has always seemed to outdo Oahu, to me at least.

But then again, I fool myself into discounting the treasure beneath my feet. The other day I watched the sun rise from Kaiwa Ridge on the Windward coast of Oahu, and had a geological awakening at the same time. The hike is short, just 4/10ths of a mile, but the climb is 600 feet, and I was seriously huffing and puffing most of the way up the small mountain ridge. 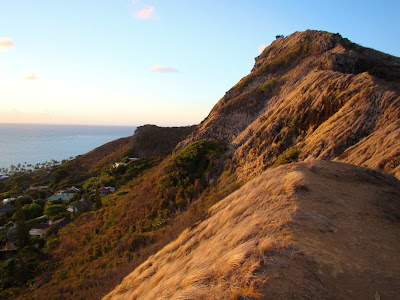 My destination was the "Pillbox", a machine-gun emplacement built during World War II. When Pearl Harbor was attacked on Dec. 7, 1941, it was actually the northeast shore near Kailua that was hit first. The concrete structures were soon constructed to defend against a feared Japanese invasion that luckily never came. As I struggled up the steep trail, I found myself imagining the poor Army grunts who had to haul ammunition up these hills. 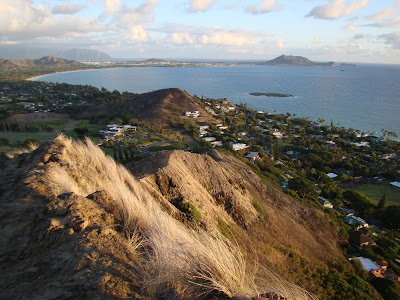 The view from the top was astounding. I could see the most of the Ko'olau Range, which forms the steep cliffs that surround Kailua and Kane'ohe, as far as Kane'ohe Bay. Hidden in the rocks of these impressive 2,000 foot cliffs was an incredibly violent story that probably affected the entire Pacific Ocean basin. 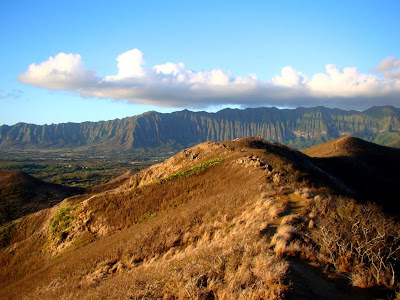 2.7 million years ago, the Ko'olau volcano was a massive shield complex, much like Mauna Loa or Kilauea today on the Big Island. To the south, the volcano was buttressed against Oahu's other volcano, but to the north there was only deep ocean. A huge caldera, about eight miles long and four miles wide formed the volcanoe's summit. Around two million years ago, the north flank of the volcano destabilized and slipped into the sea, forming an underwater landslide of apocalyptic proportions. The huge mass, called the Nu'unau Slide, flowed underwater for a distance of 120 miles. A single chunk in the mass is eighteen miles long and a mile thick. A slide this large almost surely produced a super-sized tsunami that would have caused serious damage across the Pacific Rim. Needless to say, we wouldn't want it to happen today. Such waves have landed chunks of coral more than a thousand feet above sea level on the islands. 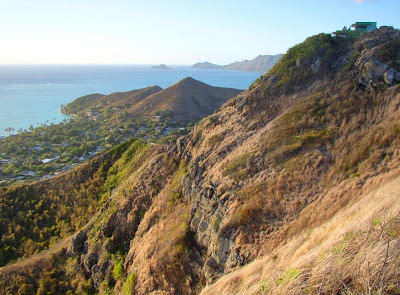 Kaiwa Ridge, the one I hiked the other morning, is made up of dikes and altered basalts of the caldera. The steep cliff in the distance, the Ko'olau Mountains, is the rim of the massive landslide that wreaked havoc across the Pacific. It is on the eroded remnants of this geologic catastrophe that the peaceful village of Kailua is built.

Now this is what I call a vacation!
Posted by Garry Hayes at 1:27 AM

If you can, you should hike up Koko Crater, part of the Koko Rift Zone. It's steep, but has a great view down into the crater, as well as looking up into the Ko'olau range from the south. There is an old funicular railroad track that you can use as a stairway. Go early though, the route is very exposed.
According to what I have read, the caldera of the Ko'olau volcano encircles Kailua and Kane'ohe. Kind of neat.

^_^ The photos are incredible! I wish I had known you were going, I would have told you to hit Ewa beach and check it out!

Also Mt.Etna made a similar disaster, which is recorded in some archeology sites in Turkey