Dispatches from the Road: Kipukapuaulu, a Residence of Godly Existences 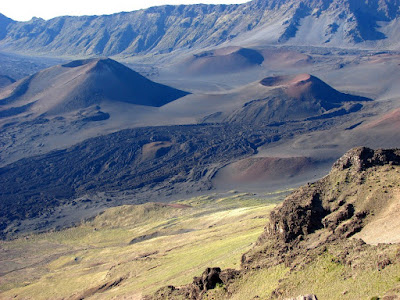 As noted previously, I'm actually not on the road anymore in Hawaii, but since I had the idea for this post while I was there, I'm still calling it a dispatch. And actually, the first two pictures are aren't from my recent trip either, but they illustrate very nicely the idea of a kipuka. The picture above shows a number of cinder cones in the high summit valley of Haleakala on the island of Maui. If you look closely at the rough, blocky a'a flow below the closest cone, you can see an odd smooth area that I have enlarged below. The lava flowed around the small area of older rock, and that is what a kipuka is: an area of land that is completely surrounded by a lava flow. 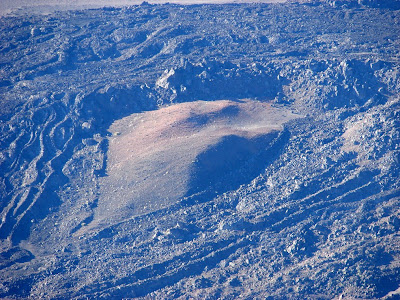 If the land surface pictured above had not been at 8,000 or 9,000 feet, one could imagine that a forest growing within the kipuka might have survived the volcanic eruption and lava flow, and in the aftermath would be isolated from any surrounding forest tracts.

That's what happened at Hawaiian Volcanoes National Park on the Big Island of Hawai'i. About 600 years ago, a lava flow from Mauna Loa overwhelmed the forest of mature Koa and Ohi'a trees, but left a fragment of the woodland sitting on lavas 8,600 years old unscathed. The kipuka was often mantled with ash from the eruptions of nearby Kilauea, but the forest persisted. Today, the kipuka contains one of the most diverse collections of native flora on the Big Island. A beautiful and serene one-mile trail winds through the unique preserve. The place is called Kipukapuaulu, or the Bird Kipuka. A Hawaiian elder calls it a "Residence of Godly Existences". 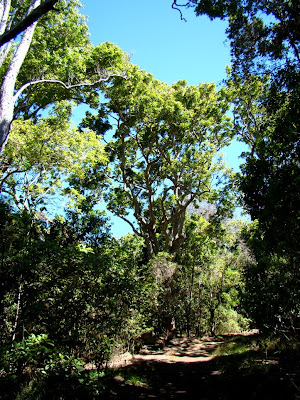 It wouldn't be quite correct to describe Kipukapuaulu as an untouched pristine environment. At one time it was, but cattle were released on the islands in the late 1700's, and pigs and goats moved in as well. The natural flora of the kipuka had no defenses against the aggressive grazers, and by the early 1900's, the kipuka was a park-like grassland shaded by the "grandfather trees", the older Koa and Ohi'a trees that the cattle couldn't reach. A park sounds pleasant enough, but the trees couldn't reproduce (the saplings were quickly eaten), and the diverse understory of shrubs and perennials had been replaced by alien grasses. 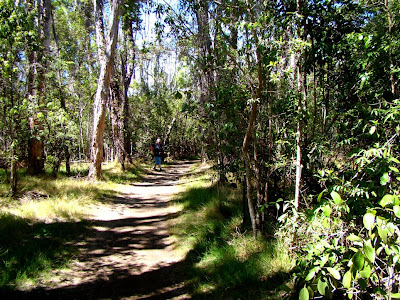 The potential value of the kipuka as a possible preserve of rare native species was recognized surprisingly early by botanists, who arranged for the removal of cattle in 1928, and the removal of goats and pigs in 1968 (a fence surrounds the kipuka). Volunteers have removed some of the worst of the invasive weeds and grasses, and seeds lying dormant in the soils started sprouting. In other cases, native species were planted. After a few decades, the kipuka is returning to a condition that is comparable to its natural state.

One of the strangest stories I've run across regarding Kipukapuaulu is that of the small tree called hau kuahiwi (Hibiscadelphus giffardianus). A botanist named Joseph Rock (shouldn't he have been a geologist?) discovered the sole remaining specimen of the plant on planet Earth in Kipukapuaulu in 1911 (the cows had not quite finished it off). He managed to collect enough seeds to get a few sprouts going, and so the plant survives in captivity, so to speak. A couple have been planted in the kipuka that was its ancestral home. 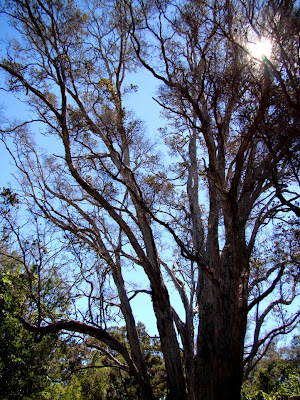 The kipuka came under protection sort of in the nick of time. Some of the "grandfather trees" that shade the preserve have been dying off in recent years (like the Ohi'a tree in the picture above). Ohi'a trees (Metrosideros polymorpha) are one of the most extraordinary of the native trees in Hawai'i. The thrive in a greater range of environments than pretty much any tree on the planet, being found in places as diverse as new lava flows, desert slopes, and alpine ridges. They can appear as small shrubs or as huge rainforest canopy trees a hundred feet tall. The trees in the kipuka may be dying of old age, or because of a series of droughts in recent years, but new Ohi'a trees will be able to grow to replace them now. 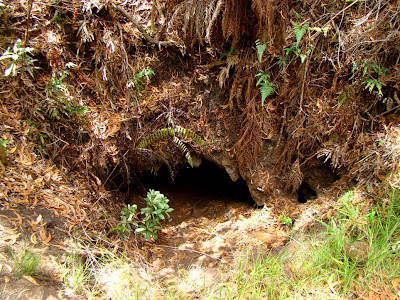 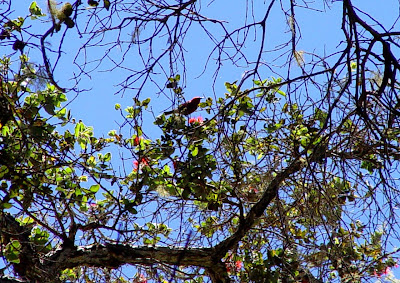 The preponderance of native plant species attracts the native bird species to the kipuka, and they can commonly be seen flitting about in the forest canopy. They are frustratingly difficult to photograph, mind you, and I am actually cheating here by showing a picture of an Apanane from a 2004 visit.

The bird below is often seen in Kipukapuaulu, but it is not actually a native. It is a Kalij Pheasant, a 1962 import from southern Asia. There is some concern about the effects they might be having on the vegetation. You can gauge the level of interest by biologists by the fact that this one had a leg tag. There is a hen hidden in the leaves to the right. 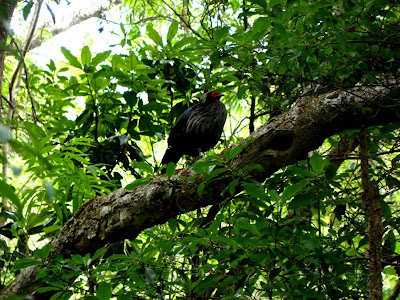 Kipukapuaulu is a fascinating and peaceful place to visit. The nature trail is well-marked, and much of my information in this post is drawn from the Kipukapuaulu Trail Guide, written by Tim Tunison and Andrea Kaawaloa-Okita, and published by the Hawai'i Natural History Association. Additional information was gleaned from the book Hawai'is Native Plants by Dr. Bruce Bohm.
Posted by Garry Hayes at 10:27 AM