Dispatches from the Road: Some of the Natives are Restless 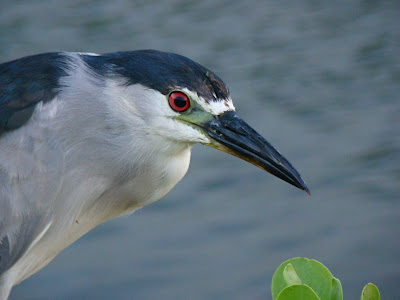 I'm home, but since I had the idea of this blogpost while I was on the road, it still counts as a dispatch. I've been in Hawaii, and I used several posts to describe the problems of non-native species on the islands, especially the birds. I complained that I didn't get any good photos this time of some of the native species, but that wasn't entirely true. We stayed in Kailua on Oahu right next to Hamakua Marsh, which is a critical habitat for four endangered Hawaiian native birds. Our red-eyed friend above is a Black-crowned Night Heron, which arrived in Hawaii in prehistoric times, but is little changed from its continental relatives. 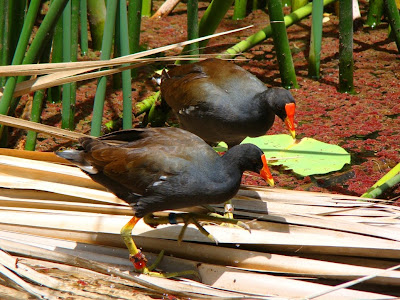 Also found in the Hamakua Marsh (and at Waimea Canyon) are the Common Moorhens, or 'Alae'ula (Gallinula chloropus sandvicensis). Unlike their name, they are not common at all, as there are only 1,000 or so left on the islands (the presence of tags on their legs is a good clue that they are endangered). They have problems with habitat loss and predation. 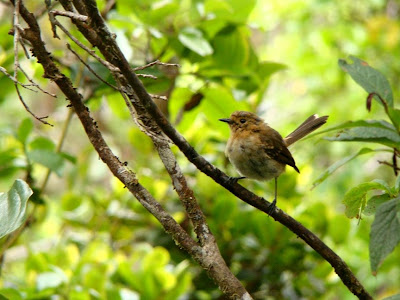 The rest of my native species pictures come from earlier expeditions to the islands. On a hike through the Alakai Swamp on Kaua'i last year, I met up with an 'Elepaio (Chasiempis sandwichensis). This is the sole species of flycatcher that made it to the islands by natural means. It's doing ok in the highland swamp where I saw it, but is endangered on Oahu 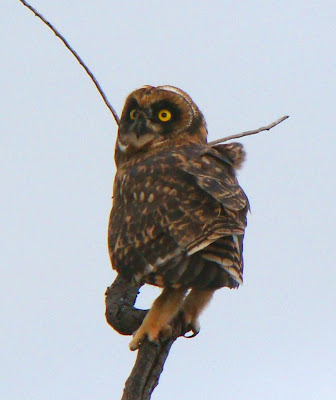 The same day I saw the 'Elepaio, I was thrilled to catch a Hawaiian Short-Eared Owl or Pueo (Asio flammeus sandwichensis) roosting on a stump at the lower end of Waimea Canyon. I try to imagine the journey that its ancestor had to get to the islands; I don't think of owls as flying over thousands of miles of ocean, but it only had to happen once in the last 5 million years. 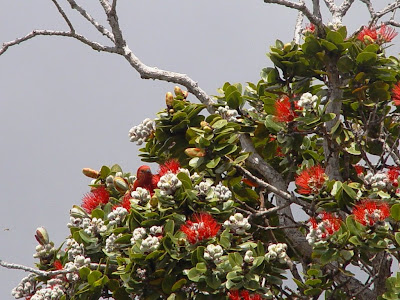 I've had the least luck catching glimpses of the Honeycreepers and related species. On a foggy day at the Na Pali overlook on Kaua'i, I played "Where's Waldo Apapane?" among the beautiful Ohia trees. The Apapane (Himatione sanquine) is one of the few native finch/honeycreepers that is not in serious danger of extinction. The original finch that colonized the islands diverged into around four dozen species, but most are already extinct, and many others are on the verge of the abyss. 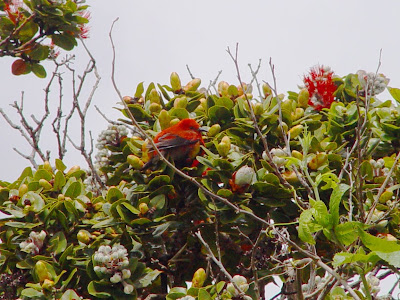 A few million years ago, a Canada Goose (or flock of geese) got misdirected to Hawai'i, and decided they liked the environment. They evolved into the Nene (Branta sandvicensis), becoming less adapted to water (losing some of the webbing of their feet), and preferring life in fields and on lava flows. The arrival of cats and mongooses on the islands almost spelled their doom and they were nearly extinct by 1951. An intense captive breeding program stabilized their population, and their reintroduction to Kaua'i (where there are no mongooses) has been successful. I saw the group below on the slopes of Haleakala on the island of Maui. 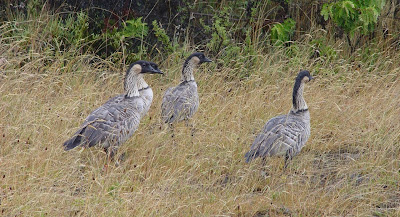 Amazing that you saw a Pueo. I'm so jealous! That's just awesome...

I was speechless when the Pueo was just sitting beside the road waiting for us. I fumbled with the camera desperately and was just sure it would fly away, but it gave us time to snap two or three shots.