I've taken three days now to describe the journey of my former student Kait and friend Ammon up the Mescalito route of El Capitan in Yosemite Valley, one of the classic big wall climbs of the world. Their trip actually took ten days. As described in the first post, all their equipment, water and supplies had to be carried up the cliff with them (and everything had to stay with them; interpret this as you wish). 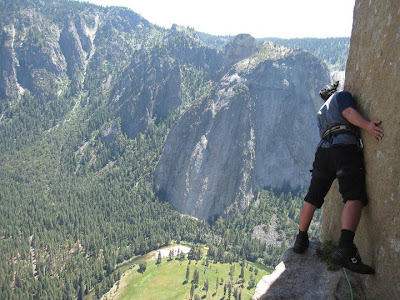 The cliff is 3,000 feet of vertical granite walls, broken up here and there by joints, fractures and cracks that provide the routes climbers use to reach the top. The second post showed our climbers in transit. 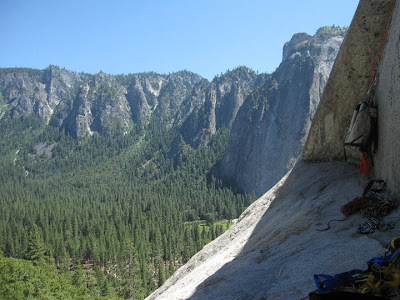 Our climbers were kind enough to take a look around and snap a few shots of the scenery as they got higher and higher on the face of the cliff. They provide us with a view of Yosemite Valley that few ever have the privilege to see. El Capitan forms one side of the "gateway" to Yosemite Valley. The rocks on the far wall are made of the same granite and display the same steep cliffs and climbing challenges. The cliffs are known as the Cathedral Rocks, and are the familiar spikey peaks that frame Bridalveil Falls when viewed from the west. They can be seen across from Ammon in the top picture (what was he looking at, I wonder?), and on the right side of the picture above. The two Cathedral Spires are just right of center in the picture above.

The cliffs on the left are composed of different granitic rocks where the joints and cracks are more closely spaced. They tend to form spires and needles rather than wide smooth faces. 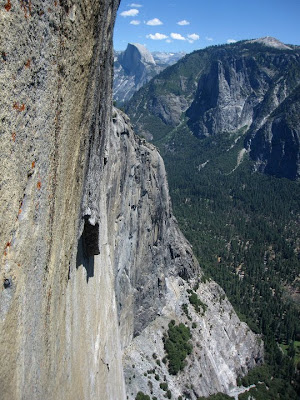 As they get higher up the cliff, Half Dome comes into view. It is composed of another type of granitic rock, the Half Dome granodiorite. Like the El Capitan granite, the unit is not highly jointed, so it forms steep rock faces with broad wide faces.

The prominent spire to the left of Half Dome is called Sentinel Rock, with rounded Sentinel Dome above and to the right. Half Dome and Sentinel Domes get their rounded shapes from exfoliation, which happens as weight is taken off the rock by erosion. The rock expands outwards, forming cracks and fractures parallel to the surface. 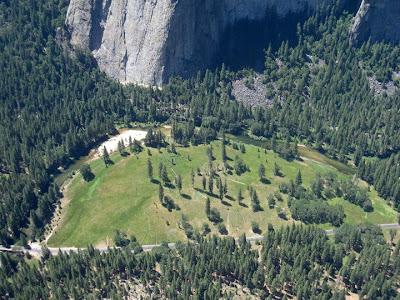 The grassy area at the base of the cliff is El Capitan Meadow. It is a well-known tourist stop for people hoping to see climbers inching their way up the cliff. How fun to see the view that climbers have looking for gawking tourists! The meadow was once a shallow lake that formed behind a glacial moraine following the last advance of ice in the valley about 12,000 years ago. The moraines are easily seen while exploring the valley floor near Bridalveil Fall. 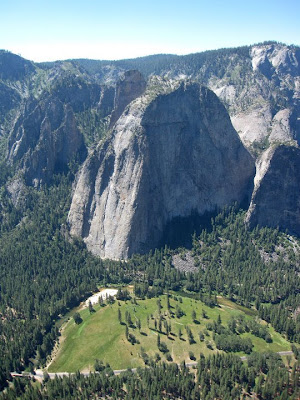 As our climbers approach the summit ridge of El Capitan, the true scale of El Capitan becomes apparent; the Cathedral Rocks, as tall as they are, are dwarfed in the view above. 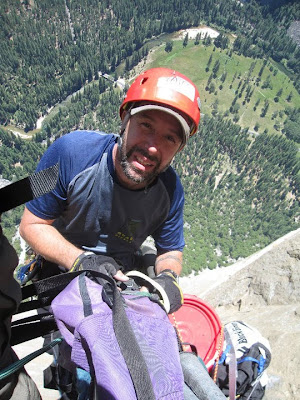 Late in the day, the climbers reach the summit! 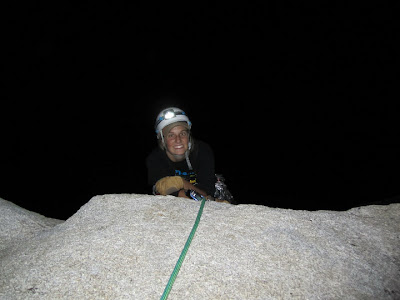 And take in a beautiful view of Yosemite Valley from the summit area.... 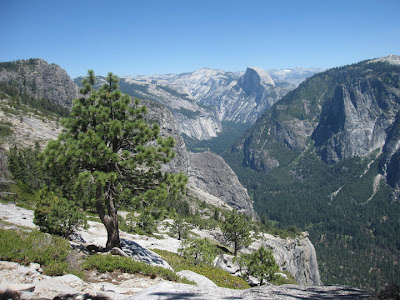 Kait and Ammon, thanks so much for sharing your journey! 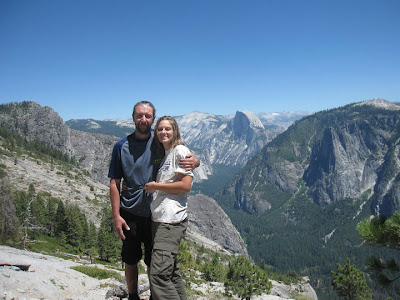 Remember, the copyright for all of these pictures belong to our climbers. Let me know if you need contact information.
Posted by Garry Hayes at 5:36 PM

Wow, what an adventure. I've held my breath throughout this climb. Sure glad you didn't take 10 days to write it up.

love the photos from the top. thanks so much for sharing.

Did they then have to down-climb the whole thing, too, or is there another option? If they down-climb, does the 10 day total include both directions?