A Call for Education About Serpentine 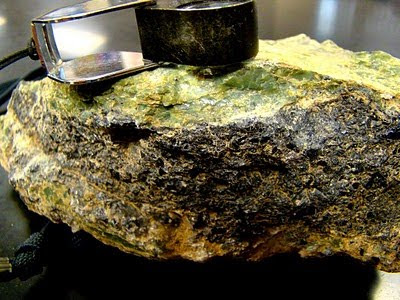 As the California legislature prepares to vote on Senate Bill 624, it is important that our senators and assembly members know that issue is important, and that they know the full story about serpentine. To this end, I agreed to a joint statement with Linda Reinstein of the Asbestos Disease Awareness Organization and Jon Christensen of the Bill Lane Center for the American West calling for increased education on the issue. We seriously disagree about the way our goals should be accomplished, but nothing good can come from ignorance on the issue. The bill may be undergoing changes in the legislature today, so please contact your assembly member as soon as possible and let them know your views. I will be updating on the issue as I learn of any developments in the legislature.

The California legislature is currently considering a bill to take the official title away from the state rock serpentine. A lively and at times angry debate has erupted online — on Twitter, Facebook, and blogs. And the unusual story has been picked up by hundreds of newspapers around the world.

But now some of the key people involved in both sides of the debate say the ruckus has gone too far. They are calling for both sides in the debate to stop throwing rhetorical stones at each other and instead use the debate over Senate Bill 624 as an opportunity to educate Californians about serpentine and asbestos, which is found in some forms of the rock.

“As this debate exploded on the internet and in the media over the past month, the arguments about serpentine have become mostly about things other than the rock itself,” said Jon Christensen, an environmental historian and executive director of the Bill Lane Center for the American West at Stanford University. “We shouldn’t be surprised. Symbols, such as a state rock, mean different things to different people. What has been surprising is how powerful this symbol is to many people, and how strongly people feel about serpentine as a symbol.”

Over the weekend, Christensen joined with Linda Reinstein and Garry Hayes, two vocal advocates on opposite sides of the state rock controversy, to try to find common ground on serpentine.

Reinstein is co-founder of the Asbestos Disease Awareness Organization (ADAO), an independent nonprofit organization dedicated to education about asbestos and support of patients and their families, which advocates for removing the official state rock designation from serpentine, because some forms of the rock contain asbestos. Hayes is a geology professor at Modesto Junior College, past president of the Far Western Section of the National Association of Geoscience Teachers, and one of the most active voices in an online campaign to retain the state rock honor for serpentine.

Reinstein and Hayes agreed the educational value of the debate about serpentine was in danger of being eclipsed by polarized political rhetoric over its official status as a symbol. Whether the bill passes or not, they agreed that education about serpentine and asbestos is important to Californians. Some serpentine contains asbestos, although hazardous asbestos fibers are not released from the rock unless it is broken up, crushed, or repeatedly disturbed. Common sense guidelines for limiting exposure to the asbestos fibers that naturally occur in some serpentine are readily available on the web.

In 2009, Reinstein said, ADAO joined efforts with The John McNamara Foundation and the Pacific Heart, Lung and Blood Institute, on a campaign to “Drop the Rock” to raise awareness about asbestos-related diseases. Reinstein’s husband died of mesothelioma. This spring, she told her story to state Senator Gloria Romero, who agreed to sponsor a bill to remove serpentine’s title as the official state rock.

“ADAO understands the geological importance of serpentine and respects its historical significance to our state,” said Reinstein. “SB 624 seeks to remove a symbolic title from a rock that represents pain and suffering for many patient and families who have been affected by asbestos-caused diseases in California, and beyond. Promoting asbestos mining was one of the many reasons for designating serpentine the state rock in 1965. Asbestos mining no longer takes place in California, and the use of asbestos in industrial processes is regulated. This is about education not litigation.”

“State symbols provide a great opportunity for education,” agreed Hayes. The geology professor would like to see serpentine remain the state rock, though he would prefer to have the name changed to the technically correct term serpentinite. Hayes said he understands and respects the concerns that Reinstein and others have about asbestos. His grandfather died of lung cancer.

“We should take this teachable moment to establish serpentinite as the state rock with a clear statement of why it is the state rock,” Hayes said. “Then every child who does a school project in the years to come about state symbols will learn about this fascinating and unique rock, and they will learn about asbestos at the same time.” Hayes said there is abundant information available about the special role that serpentine has played in helping geologists understand the geological formation of California, as well as the native plants that live on serpentine’s harsh soils.

While Reinstein and Hayes agreed to disagree about the current bill and prospects for amending it, they joined with Christensen in urging citizens to learn more about serpentine as the debate over the bill continues, and urging advocates on both sides to focus on education.

“Whether or not serpentine remains the state rock, it will remain an important part of California’s geology and history,” said Christensen, who is writing a book about serpentine. “The rock is not going anywhere. People’s understanding of serpentine is what is at stake.”
Posted by Garry Hayes at 12:59 PM

Ms. Reinstein states that serpentine is "a rock that represents pain and suffering for many patient and families who have been affected by asbestos-caused diseases in California."
With respect, I have to point out that one can feel that any rock represents whatever you want. To me, granite represents "pain and suffering" because I was once conked in the head by a chunk of granite. And quartzite has always seemed to be a cute and cuddly rock, because when I was a kid I made a "pet rock" out of a quartzite clast.
I do not expect the legislature to vilify granite or elevate quartzite just because of my feelings -- and Ms. Reinstein should do the same.
She also needs to learn that serpentine and asbestos are not the same thing!

I am thrilled to see this joint push for education. It's very important for all of us to understand what real environmental risks we are exposed to, and to correct misunderstandings about what does or does not pose risks.

However, as an environmental scientist and an environmental activist, I am concerned about this legislation for an additional reason: aside from the geologic inaccuracies, it allows legislators to pat themselves on the back for a bill that, in fact, does nothing to actually decrease environmental health risks to the public.

Thanks CB, I have been saying this a number of times now. This legislation won't save anyone, won't educate anyone, and will only propogate fear about asbestos with no scientific basis. Not many people are unbiased when it comes to the flood of "peer-reviewed" journal articles that support everyone's legal viewpoint, but geologists, biologists and teachers who aren't involved in lawsuits may come closer to being objective than most. It's a shame that no one ever thought to consult with the people who work with serpentine the most. I had hoped that our voices would be heard in Sacramento on this issue when we started getting media attention, but I'm not so sure now. Most of the legislators give little evidence of caring about the issue, even though it may cause problems down the line.