Dispatches from the Road: 90 Seconds on a Lava Flow 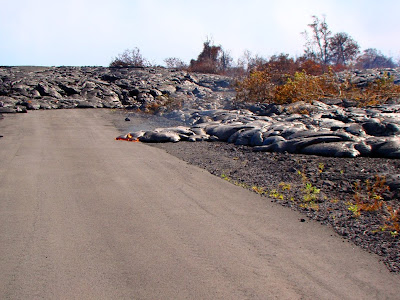 I really had no idea what to expect. Pu'u o'o vent on the east rift zone of Kilauea on the Big Island of Hawai'i has been putting out vast amounts of lava for most of the last 27 years, and day to day the location of the flows can change. For months at a time the active flows can remain high on the palis, far from any trailhead, and other times the lava can flow almost entirely through tubes, emerging for only a few seconds at the coastline before being consumed by waves. Unfortunately the flows can suddenly break out in new directions, leading to destruction of homes, roads and sacred archaeological sites. Scheduling a trip hoping to see active lava flows is always a crapshoot, and I have learned not to expect great conditions. Sometimes it just isn't gonna happen. 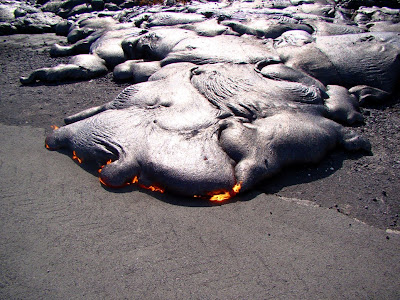 My trip to the Big Island this week was no exception. Over the last few weeks the volcano goddess Pele has been unusually active, and a huge flow threatened homes in what remains of Kalapana (most of the town was overrun by lava in 1990). One home was destroyed, and lava came within a hundred feet or so of several other houses.

Such spectacles bring spectators, and there have been complaints from property owners of tourists (and tourons) crossing property lines and leaving messes. The county responded by establishing a viewing area, but the view is often limited. I was one of those tourists who showed up, and I respect the needs of the homeowners, but the desire to see active lava is a powerful impulse in a geologist. So I arrived at road's end not knowing what to expect. 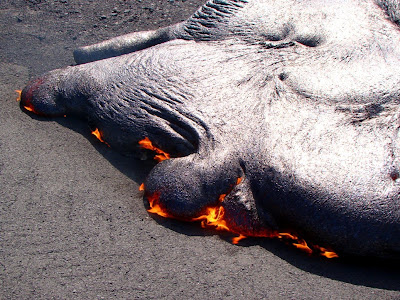 Sometimes the stars line up just right, and sometimes there is the small print. I arrived at the viewing area early in the day, and just a few people were walking down the road. The lava was mostly at a distance, but I had read of a new breakout near the end of the road, and when I arrived, I was given a very brief chance to cross the lines and check out the leading edge of the flow just as it started to consume some of the old highway. The deal was that I move back behind the lines when someone else showed, and that lasted all of 90 seconds. I didn't complain. It was enough to stand four feet away from the blazing hot rock and snap off a few photographs. Enjoy! 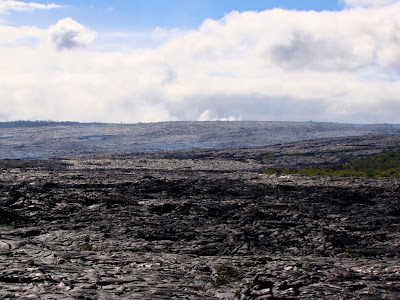 Even had I not seen the lava up close, the other sights were fascinating. Above, on the pali, I could see the pathway of the lavas as a wall of steam and smoke along the tubing system that was bring the lava from the vent at Pu'u o'o six or seven miles away.Visitors at night would see the glow of incandescent lavas on the slopes. 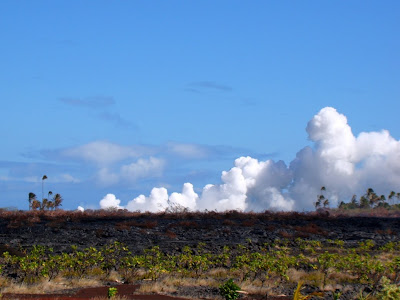 Towards the coast, I could see the steam rising from where the lava was pouring into the sea (this ocean entry was saving homes in Kalapana by draining lava away from the village). At night the steam will glow orange. That's fresh lava from the last week in the foreground; the brown plants were burned by the passage of the flow. 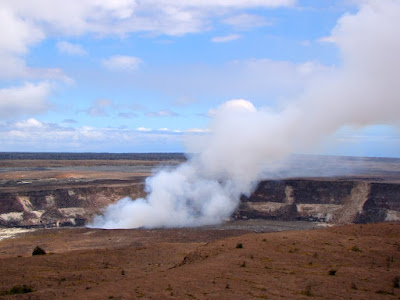 Lest we forget, there are actually two areas where volcanism is occurring on the Kilauea shield. In 2008, a vent opened in Halemaumau below the park visitor center and laboratories, and lava has been simmering in a 600 foot deep hole ever since, with the occasional explosive outburst. The shot above is how it appeared this morning.

It was a great day! My pictures hardly do justice to the lava, by the way. To see some great photography and get some on-site descriptions from someone who lives there, check out Leigh's sight, Hawaiian Lava Daily.
Posted by Garry Hayes at 11:49 PM

Lucky! We're very jealous here in "Already Started School" Land. Next time might I suggest a physical sampling tool of some sort so that you can share your experience with those of us stuck at home.

Wow! How cool, or should I say hot, to get the front row seat, even if for only 90 seconds.

Garry, That is great, it beats out the volcano at Mono Lake that I finally hiked last Sunday.