Dispatches from the Road: A Geologist does Birdwatching 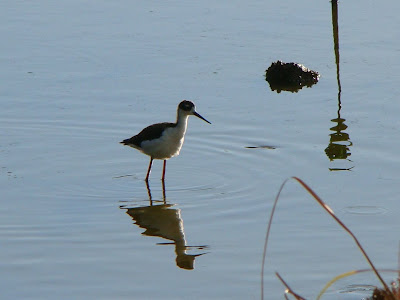 One of the joys of visiting the Hawaiian Islands are the chances to see the unique birds. Although residents may get used to seeing the Myna birds and Zebra Doves, almost every bird in sight is unique to me, the mainlander from California. Not only are the birds unusual and colorful, they represent one of the best ways to see evolution and natural selection in process.

The islands are one of the most isolated landmasses on the planet, and prior to the arrival of humans they played host to a diverse group of island castaways and survivors (birds who arrived by accident, and colonized the new volcanic islands). Single species of birds found a range of food sources, and adaptations soon appeared in different populations. Eventually a group of finches called honeycreepers evolved into more than fifteen distinct species. Darwin would perhaps have found them more compelling than the finches of the Galapagos. Many dozens of other unique bird species can be found here (and many more, found as fossils only, are extinct).

I "collect" birds when I am on the islands (on digital imagery, of course), and I get excited whenever I "capture" a new one. The picture above is my first half-decent shot of an Ae'o, the Hawaiian Black-Necked Stilt. They are related to stilts on the North American continent, but show distinct differences. It is endangered, with only about 1,300 of them on the islands. They have been quite shy in my previous encounters, but a zoom lens is a wonderful thing. 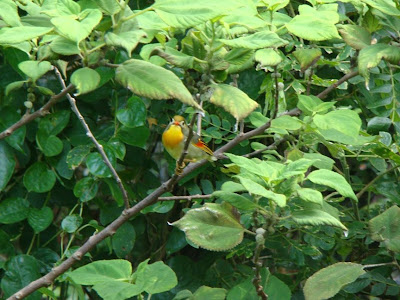 Natural selection is acting in the present day as well. Animals adapt to changes in their environment, and few changes are more drastic than the arrival of humans. The ancient Polynesians brought new animals to the islands 1,500 years ago, and the bird species who could not compete with the new arrivals disappeared. The survivors will eventually adapt to the new invaders.
The process of competition accelerated in the 1800's and 1900's as ever more birds arrived with humans. Escaped pet birds, and misguided attempts at pest control resulted in most of the native birds being driven into refuges high in the forested mountains. Most visitors, especially the ones who stay only on Oahu, never see the native species. The Mynas are Indian, and the Zebra Doves are Australian.
Just the same, some of the introduced species are very pretty, and I saw a new one yesterday on the cliffs at the Pali Overlook above Kailua. The old highway is now a trail being reclaimed by the jungle. We heard a lot of birds singing, and for a split second, the singer appeared just long to get two fuzzy photographs. 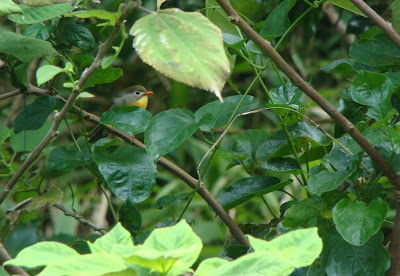 The beautiful yellow and red bird turned out to be a Red-Billed Leiothrix, a 1918 Chinese import. It is also called a Peking Nightingale. It lives in dense forests and is said to be hard to spot sometimes, despite the bright colors.
If you ever get the chance to come out to the islands, get away from the cities! It is a precious and beautiful place to explore, from the shoreline to the tops of the highest volcanoes.

Very different post Garry. Although Hawaii is on my list, not very high up, I'd want to visit the less visited islands. The lush green is very inviting.