Dispatches from the Road: Excuse me, there's a Kao trying to get into your Kipuka Pu'u Huluhulu...

It's hard to imagine a more spectacular setting than Saddle Road Summit on the Big Island of Hawai'i. Two of the world's largest volcanoes, Mauna Kea and Mauna Loa, overlap at an elevation of almost 7,000 feet. In the middle of the broad pass, with expansive views of both volcanoes, there is one of the most extraordinary sights of all the islands: Pu'u Huluhulu. The name means "shaggy hill". It's a small knob, a minor cinder cone lying between two giants, but it tells a fascinating story. The cinder cone erupted several thousand years ago, and has since been surrounded by barren basalt flows, most recently in the 1930s. These isolated areas surrounded by fresh lava flows are called kipukas. 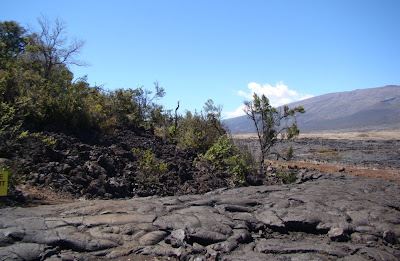 On islands that have been ravaged by invasive species the way Hawai'i has, kipukas serve as islands within islands. They can preserve a native landscape that has disappeared from most of the rest of the islands. At Pu'u Huluhulu, the slopes preserve a Koa tree forest environment that once covered most of Mauna Kea, but which was decimated by logging and grazing over the last 150 years. If and when we decide to change our land-use practices on the islands, a kipuka like this one can be the source of native species that could eventually lead to the reforestation of the mountains. 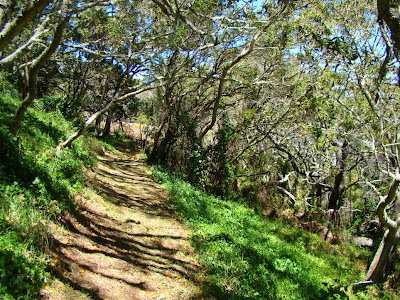 Koa trees, like those seen above on the trail around Pu'u Huluhulu, once grew in abundance on the islands, reaching upwards of a hundred feet tall, and trunks wide enough to fashion canoes. Most of the "grandfather" trees have been cut down, so a place like this, with a Koa forest environment, is all the more valuable.

One cannot mistake this place as a pristine environment, though. The area was grazed heavily over the years and invasive weeds arrived on boots, and on the fur of goats, cows and pigs. The pigs and goats were especially destructive of the understory shrubs. What has changed is the growing recognition of the value of such places. A fence has been constructed to keep out the goats and pigs, and volunteers have been weeding out the invasive plant species, and planting, or encouraging the growth of dormant seeds of the native understory shrubs and perennials. They're doing a good job. The native vegetation attracts native bird and insect species, and Pu'u Huluhulu is often a good place to see the native Amakihi, Apanane, Io (Hawaiian hawk), Pueo (Hawaiian owl), Nene (the Hawaiian goose), I'iwi and other unique birds. We heard, but didn't see any close enough to photograph on this trip, but I'll be back! 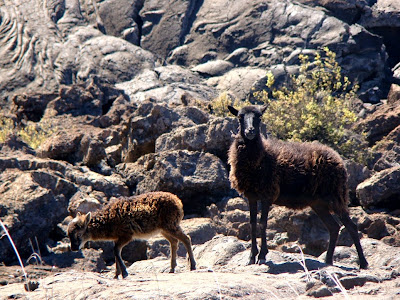 We did see a rather incongruous sight, though: a herd of goats wandering across the barren lava fields (that's the "kao" of the blog title today). They know very well what lies across the fence, and they literally hang around the gateways in the fencing, hoping for a chance to get into the kipuka and do their thing, which is eating and eating. When they say "close the gates", please do it! There is grazing land across the highway for the goats.

If you have old memories of Saddle Road as a hellish, dangerous winding mountain road, or if you visit for the first time and read that the road is not for the faint of heart, the situation (for better or worse in the philosophical sense) has changed. The road has been repaved and engineered, and is a pleasant drive, if it isn't raining or foggy. Some people miss the wildness of the old route, which was pretty unnerving when I followed it for the first time. The expansive views, especially on the western slope on clear days, are stunning. It's a purely Hawaiian experience, but not a Hawai'i stereotype. There really isn't any place like this in the world.

Next time: a different kipuka...

All the world needs kipukas to preserve indigenous species.

Never made it up that road - supposedly the rental car company would have killed us. Very cool to see here!