Time Beyond Imagining: A "Brief" History of the Colorado Plateau 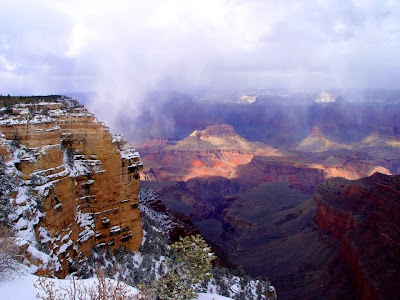 Please forgive me for filling the feeds with such a long post, but I wanted to pull together an annotated list of the blog posts of my just completed journey through the geological history of the Colorado Plateau. It turned into a massive project that lasted more than a year, and included seventy different postings and more than a hundred photos. Don't feel compelled to try reading it, but I hope you enjoy it if you do. If it lacks precise continuity and style, remember that I had no idea how it would end when I started it and I had no editor! I've been taking students on the plateau for twenty years, and it has proven to be one of the best places on the planet to learn earth history.

Labels: Geology of the Colorado Plateau, Time Beyond Imagining

Wow! This has been a great series - and this is a nice way to summarize it. I've also considered this group of posts an inspiration for blogging.

I've enjoyed most of this series and have learned a lot. Will have to go back to some of the earlier ones. What a wonderful project to undertake. Your students are so lucky. Thanks for the list.

Impressive! Thanks for putting them all in one index post like this ... a resource I will return to many times I'm sure.