Time Almost Not Beyond Imagining: Recent Volcanism on the Colorado Plateau and Deep Time 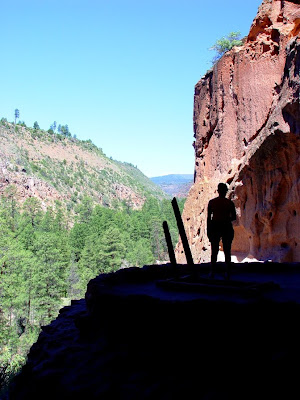 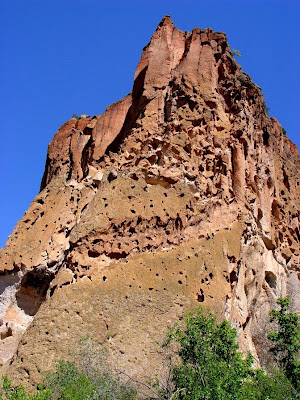 1.15 million years ago, a massive explosion shook the New Mexico landscape, and some sixty cubic miles of ash shot into the atmosphere in a catastrophic rhyolite caldera eruption. The collapse of the magma chamber produced the Valles (Jemez) Caldera. Some of the ash traveled as far east as Iowa, but most of it was dumped on the flanks of the volcano in layers hundreds of feet thick. It was so hot upon landing that the material fused back together into a solid light-colored rock called welded tuff. Smaller eruptions followed, the most recent around 50,000 years ago. Erosion has been eating away at the margins of the caldera, forming a number of deep canyons (see this map of the caldera). One of these canyons is called Frijoles, the "Canyon of the Beans".

Tucked away in Frijoles Canyon one of the more interesting national monuments in the park system: Bandelier. It preserves the remains of an Ancestral Pueblo village that was built nearby and sometimes right into the welded tuff generated by the Jemez Caldera eruption. It is a fascinating place to explore. Although humans had passed through the region for portions of the previous 10,000 years, the village was built around 1150 AD and abandoned about 1600 AD.

A couple of divergent thoughts crossed my mind when I was considering a post on Bandelier National Monument. They had to do with deep time, and the wanderings of people. Wanderings takes up the next post. Here, I wanted to provide a bit of perspective about geologic time.

A thousand years seems a long time to the casual tourist wandering through these very ancient dwellings. We can feel a connection to these people sometimes as we look at the drawings they made on the rock, or the personal improvements in the living spaces in the rock rooms of the village built into the cliff. And yet they seem far removed by time. The year 1600 seems impossibly distant to our daily lives.

Still, there were (and actually still are) people in my life who were personally acquainted with Civil War veterans. And those veterans would have known people whose lives reached into the 1700's. Two or three degrees of separation...it isn't that far back is it? We can perhaps visualize that kind of time if we work at it.

Deep time is one of the four great discoveries that mark the biggest advances of my science, that of geology: the others were the principles of uniformitarianism, evolution, and plate tectonics. The first two are largely credited to one man, James Hutton, and evolution is credited to Alfred Wallace and Charles Darwin, although others were involved. Plate tectonics was the discovery of dozens, even hundreds of researchers, although Alfred Wegener is given credit for kick-starting the idea though sheer stubbornness (I guess this should give the Alfreds of the world some hope!).

Bandelier National Monument is a fascinating and scenic place to wander. The top photo is of a kiva set in a high alcove in the upper canyon. Getting to it requires an acrophobic climb up some high ladders and narrow trails. The rocks of the canyon walls are full of holes caused by cavernous weathering of the relatively soft rock. Along the canyon floor, the Puebloans scraped and scooped out the rock to make their living spaces larger and more comfortable. I will have some more photos of the ruins in my next post. Camping and other facilities (mostly built by the CCC in the 1930's) are available.