Time Almost Not Beyond Imagining: Recent Volcanism on the Colorado Plateau Pt. 3 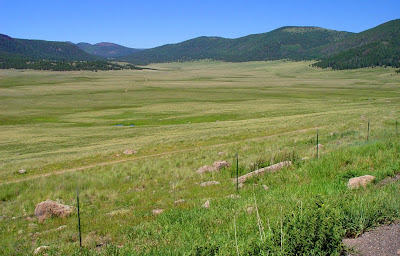 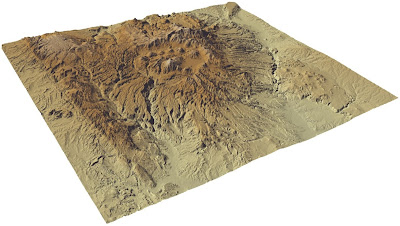 Top picture of the Valle Grande by Garry Hayes. Bottom image of the Valles Caldera courtesy of the New Mexico Bureau of Geology and Mineral Resources.

I will probably get a bit of geographical argument about today's geological feature, as it might not really be considered part of the Colorado Plateau, and more a part of the Rio Grande Rift, but it is on the plateau side of the rift, and on my field trips to the plateau, it is an important stop. So there you go. I've been moving towards wrapping up my long running series of posts on geological history of the Colorado Plateau, and we are into the last few million years of plateau history. At 6 million years, the final parts of the Colorado River system were established and the main carving of the Grand Canyon had begun. Volcanism began in the Flagstaff region, with numerous cinder cones, lava domes, and a stratovolcano forming the San Francisco Peaks Volcanic Field. Further to the east, the crust was stretching and breaking the crust to form the deep trough of the Rio Grande Rift. Like the peaks near Flagstaff, the faulting of the rift provided an avenue for magma to reach the surface. Unlike the Flagstaff area, the volcanism manifested itself in a totally different and violent way. This is the Valles (or Jemez) Caldera of New Mexico.
Valle Grande in the midst of the caldera is a beautiful serene high altitude prairie surrounded by and containing numerous forested lava domes reaching elevations as high as 11,000 feet. The grasslands fill a crater-like depression 12 miles in diameter. The peaceful scene belies a catastrophic origin.
As America's first national park, Yellowstone gets a lot of press, historically for all the geysers and bison and stuff, but more recently because of documentaries about "supervolcanoes" on various science-related cable channels. I'm sure the film-makers would never stoop to broadcasting sensational stories about impending eruptions that would destroy life across a broad swath of the continent, but somehow people have gotten that impression. Just the same, Yellowstone in modern times has developed a reputation as a spectacular example of an active rhyolite caldera. What is not so widely recognized is that the continental United States has at least three active caldera systems: Yellowstone, Long Valley in California (Mammoth Lakes), and the Valles Caldera in New Mexico. And a major eruption from any one of them would be a true catastrophe on par with a asteroid impact. The good news is that such eruptions are rare, with hundreds of thousands of years of volcanic quiescence between major events.
Eruptions have been taking place in the vicinity of Valles Caldera for six million years. A major caldera formed in an eruption about 1.5 million years ago (the Toledo caldera), and then the eruption of the Valles Caldera destroyed the older caldera and formed the present depression about 1.15 million years ago. It is hard to imagine the scale of such events. The last eruption in the lower 48 states, that of Mt. St. Helens in 1980, produced about a quarter of a cubic mile of ash and lava. It killed four dozen people and devastated 150 square miles. One of the most famous eruptions in modern history, at Krakatoa in 1883, was the equivalent of 20 St. Helens eruptions, producing 5 cubic miles of ash. The eruption of the Valles Caldera produced just more than 60 cubic miles: the equivalent of 250 St. Helens. With so much material blown out from the magma chamber, the ground above could not remain stable, and it collapsed into the void. Ash from the eruption covered a multi state region; near the volcano it was so hot that as it landed it hardened into a solid rock, welded tuff.
In the millennia that followed, magma refilled the chamber and the center of the caldera rose several thousand feet. Smaller eruptions produced a number of lava domes, the most recent around 50-60,000 years ago, but the volcano is not dead. Magma still simmers deep in the crust under the caldera. Valles is now considered an ideal of example of a resurgent caldera.
During World War II, physicists first caused a nuclear chain reaction in Chicago but prudence dictated designing the atomic bomb in an isolated location. They chose the flank of Valles Caldera, and the Los Alamos National Laboratory was built on a potentially active volcano. Research continues there today, although the level of secrecy is somewhat less than it was; you can drive through town without being challenged by armed guards, although you may get irretrievably lost if you make a wrong turn on the confusing streets.
The caldera was a private ranch, but in recent years was given to the federal government and is now managed as a national preserve, which is kind of like a national park, but is supposed to be economically self-sustaining. Two other geologically significant parks are found on the flanks of the caldera: Bandelier National Monument, and Kasha-Katuwe Tent Rocks National Monument. They will be covered in subsequent posts.
Posted by Garry Hayes at 8:52 PM

I'm not sure how realistic is the possibility of another supereruption at Valles Caldera; from what I've read, the magma chamber underneath is almost completely crystallized now.

Thank you SO MUCH for this fantastic, enlightening series!