Time Almost Not Beyond Imagining: Recent Volcanism on the Colorado Plateau Part 2

photo by Doc Searls via http://en.wikipedia.org/wiki/File:VulcanUinkart.jpg 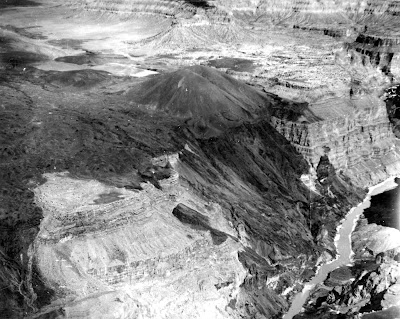 Photo by J.R. Balsley, taken in 1950, courtesy of the USGS
We continue with my long-running exploration of the geological history of the Colorado Plateau...
Once a region has risen high above sea level, and rivers are established to convey sediment, one might assume that the eventual result will be the complete removal of the rocks and the erosion of the region to a near sea level peneplain, at least until another cycle of uplift begins. Certainly that was the attitude of geomorphologists at the end of nineteenth century and the beginning of the twentieth century. Relationships exposed in the Grand Canyon seemed to bear this out to an extent, with the exposure of two major unconformities that suggested just such erosional smoothing of the landscape. It was all so cyclical, and so uniformitarian. As the decades passed, it became clear that crustal evolution was not nearly so neat and tidy, and that the geological history of any region was cluttered with all manner of untidy complications.
In the far west section of the Grand Canyon, faults related to the Basin and Range extension slice through the plateau with vertical offsets of hundreds, even thousands of feet. In addition to scrambling the landscape, they also provided a convenient pathway to the surface for magmas generated deep below in the upper mantle. Some of the resulting lava flows are easily seen near St. George and Zion National Park where they are a spectacular addition to the scenery. But, one of the most profound places I have never seen (I had to borrow the photos) contains one of the most bizarre parts of the Grand Canyon story. It's where lava flows invaded the realm of the Colorado River: the Uinkaret Volcanic Field.
Lava flows cover some 600 square miles in the Uinkaret field, and some of the flows spilled over the canyon rim and reached the Colorado River. Major John Wesley Powell, on his epic journey down the river in 1869 recognized the evidence of what must have been a spectacular sight:

"August 25, 1869 Great quantities of lava are seen on either side; and then we come to an abrupt cataract. Just over the fall a cinder cone, or extinct volcano, stands on the very brink of the canyon. What a conflict of water and fire there must have been here! Just imagine a river of molten rock running down into a river of melted snow. What a seething and boiling of the waters; what clouds of steam rolled into the heavens. "

Geologists who have been able to make more comprehensive studies of the region have come to a more startling conclusion. Lava flows didn't just reach the river. They dammed the river. Among the 150 individual lava flows in the Uinkaret from 1.8 million to just 1,300 years ago, at least 13 spilled over the cliffs into the river gorge, accumulating enough bulk to dam the stream. These were not modest dams: one of them was more than 1,500 feet high, enough to form a lake reaching hundreds of miles upstream into Utah. Such lakes would have been easily visible from the rim of Grand Canyon National Park. The past existence of the dams was recognized early, in the late 1800's. What was not so well understood is what happened to them. It was assumed that the dams were simply eroded away over several thousands of years.
Anyone who has looked closely at a lava flow will realize that they are not as solid and monolithic as one might think. The cooling lava fractures and splinters, and in water will form loose globular masses called 'pillows', or simply explode into sand-sized particles. In other words, not the first choice of dam-building material that a dam engineer might choose.
Deposits exist high on the walls of the western Grand Canyon which contain large boulders of basalt derived from the lava flows. One of them is 115 feet across. How do you move boulders of this size? The most current research is suggesting that at least five of the dams failed catastrophically; once they were breached by the river, they fell apart in a matter of days or weeks. The amount of water unleashed on the lower canyon is almost unimaginable.
A modest 'fake' flood produced by releasing water from Glen Canyon Dam up the river might involve 40-45,000 cubic feet per second flows. The largest historically recorded flood (in 1884) produced flows of about 300,000 cfs. A researcher has found evidence of a flood of 400,000 cfs around 4,000 years ago (my memory may be failing me, but I think it involved flood debris in a cave high above the river which also contained human artifacts). Estimates of major floods during the Pleistocene ice ages range in the vicinity of a million cubic feet per second.
The collapse of a 1,500 foot tall lava dam may have produced a flood of 15 million cubic feet per second. That's more than 30 times larger than the biggest flood ever recorded on the Mississippi River.
That's how you move 115 foot boulders...and carve a 2,000 foot deep gorge in the last 700,000 years or so.