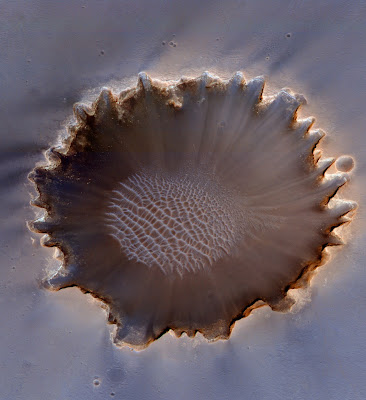 NASA may have their problems, but what they have done with robotic exploration of the other planets in our Solar System is, in my highly sophisticated scientific blogger's jargon, really cool. This photo shows the half-mile wide Victoria Crater on Mars, taken from an oblique angle, roughly equivalent in their words to looking out a plane window. Dunes of martian dust fill the bottom, and tumbled boulders and layered rocks are visible in the crater walls.

For you conspiracy theorists out there, there are some great tracks on the left side of the photo (see the high resolution version) proving that there is an intelligent presence on the planet. The tracks are actually from the Mars Opportunity Rover, which has been exploring this crater for the last two years (these were bonus years, the original mission was to be a few months and has gone on for years instead).

I remember so well as a child in the 1960's being frustrated that the only pictures I could ever see from Mars were these fuzzy disks that revealed nothing of the planet surface. I hope that anyone looking at these incredible images appreciates the fact that we live in extraordinary times when such images of a planet other than our own are so easily accessible.

Get the NASA description of the photo here:
http://www.nasa.gov/mission_pages/MRO/multimedia/mro20091012a.html?msource=12209