Time Beyond Imagining - Where did the Ancient Enemy Go? 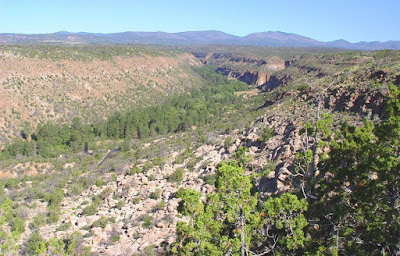 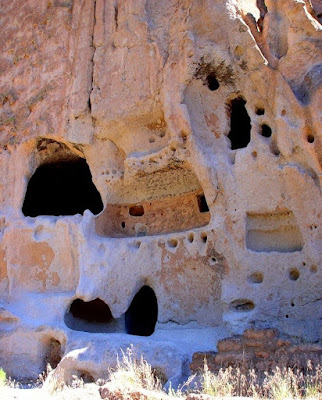 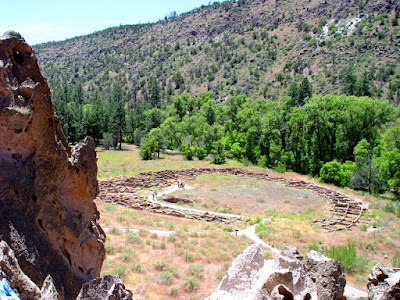 Bandelier National Monument on the flanks of the Jemez (Valles) Caldera is a fascinating place to observe Pleistocene geology, being the site of a massive rhyolite eruption only 1.15 million years ago (back to geologic time instead of human time; so much for yesterday's post on deep time...). Subsequent erosion carved canyons into the slopes of the volcanic edifice that later provided arable environments when humans arrived in the region within the last 10,000 years. Their construction of these dwellings in Frijoles Canyon provides a piece to an interesting puzzle.
Part of the mystique of the Colorado Plateau has to do with the disappearance of the Anasazi People ("Ancient Enemy" in the Navajo language. I know that name is out of vogue, but bear with me on this). A number of reasons have been advanced to explain why essentially the entire region was depopulated about the end of the 1200's. They point to a disastrous 25-year drought, soil and resource depletion, religious influences, invasions and warfare. For years it was standard procedure to promote this deep mystery of "where did all the people go, and why?" I haven't read the book in years, but even Louis L'Amour got in on it with Haunted Mesa, where I guess they disappeared into some different dimension or something (I didn't think it was one of his better efforts...).

Not being an anthropologist, I am perfectly satisfied with the idea of the stress of a drought as the root cause of the migrations out of the region. Making a living on the plateau has always been a dicey proposition, and it still is today. Big cities like Phoenix, Salt Lake City, Albuquerque and Las Vegas flank the plateau country, but few towns thrive in the midst: Flagstaff, Moab, Farmington, Cortez, and a few others, totaling a few hundred thousand people at most. Water is a limiting factor, and even today with all the technology we have for pulling water up and out of rivers and from underground, most towns on the plateau barely have enough. Water for use by the 4 million yearly tourists at Grand Canyon is captured at a spring on Bright Angel Creek deep in the canyon, and pumped up 5,000 feet to both rims.

There is, in fact, a tremendous amount of water available on the Colorado Plateau. The Colorado River offers something like 10-15 million acre-feet each year, even in the dry ones. But where is the river? Across most of the plateau, the Colorado flows through deep canyons, far from any kind of arable lands. Today, to make use of the water, we've had to construct giant monstrosities of dams and reservoirs to capture the water, and a huge network of canals and pipelines to distribute the water to where we have chosen for it to go. That technology wasn't available 700 years ago.
If you were a community of people living on the edge, depending on the yearly rains that simply weren't coming, the choice boils down to migrating elsewhere or starving. A prolonged drought would have serious consequences: crops would fail, hunger would be widespread, soil erosion would commence, and in an such an environment, one could understand that a fight for survival might mean a fight with others for limited resources. Religious beliefs would certainly play a part, since the gods would be presumed to be angry, and they would need to be placated to bring back the rain.
As to the "where" part of the question, that is somewhat less of a mystery. They moved to where dependable water supplies could be found. For some communities, these were the mesas that nowadays form the Hopi Reservation. Some of the towns there have been occupied continuously since the 1100's. Others headed south and east into the Rio Grande River country where two dozen different puebloan groups continue to live today. The Acoma and Taos pueblos have been continuously occupied for around 1,000 years, and the village at Bandelier was constructed about 1150 AD.
The term "Anasazi", mentioned before as meaning "ancient enemies" by the Navajo, has no precise meaning. The haunts of the people now called "Ancestral Puebloans" on the Colorado Plateau had been abandoned by the time the Navajo people arrived in the region.
Does the story of the Ancestral Pueblo people on the Colorado Plateau have any relevance to our society today? Ya think? The southwestern part of the United States is in the midst of a historically unprecedented drought that is probably influenced in large part by global warming. There are serious concerns that Lake Powell and Lake Mead could conceivably go dry in a decade. The effects are being felt at Bandelier as well, although ecologists don't see the effects as all bad. Just the same, millions of people depend on the Colorado River. If the modeling is correct, we have some serious choices to make concerning water use in this arid region.
The first picture of the day shows Frijoles Canyon in Bandelier with the rim of the Valles Caldera on the horizon. The ruins in the main canyon include the unique cliff houses (second picture) carved directly out of the softer parts of the rhyolite (the linear pattern of holes is where timbers were inserted to hold up floors and roofs). Harder chunks of rhyolite were used to make the bricks that form the buildings in the village called Tyuonyi on the main nature trail at the monument (third picture).
School begins tomorrow! If blogs become a bit more irregular, you'll know why...
Posted by Garry Hayes at 11:11 PM