Time Almost Not Beyond Imagining: Recent Volcanism on the Colorado Plateau 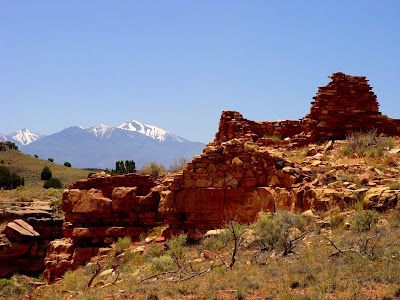 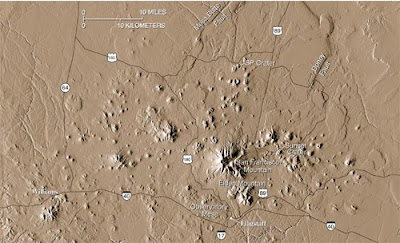 Top photo shows the San Francisco Peaks looming over the ancestral Sinagua ruins at Wupatki National Monument near Sunset Peak. Bottom diagram is a digital topographic map of the San Francisco Peaks Volcanic Field from the USGS Fact Sheet 017-01.
Six million years ago, the Colorado River was just beginning to carve the Grand Canyon. The rest of the Colorado Plateau had risen to thousands of feet above sea level, and was being vigorously eroded, but around the edges, other things were happening: the land was falling away, so to speak. The Basin and Range (and the related Rio Grande Rift) were being stretched, and in response the crust split into numerous fault blocks, some bobbing upwards into mountain ranges, and some blocks sinking to form deep basins (the deepest, such as Death Valley, eventually sank below sea level). Such stretching of the crust is a prelude to the breakup of the North American continent. The splitting of the continent is not an instantaneous process; it has been evolving over the last 20-25 million years as convergence was ending on the west coast of the continent, and the San Andreas fault system was slowly expanding.

The stretching and thinning of the crust released the pressure on the underlying mantle rocks, allowing them to partially melt and start rising through the overlying crust. The faults of the Basin and Range provided an easy avenue for magma to reach the surface, and so volcanism has played a prominent part of the landscape visible to us today on the Colorado Plateau. Recent lava flows and volcanoes can be seen in the Zion National Park area, especially near the towns of St. George and Hurricane, and at Mt. Taylor in New Mexico. But two areas of volcanic activity especially stand out: the San Francisco Peaks Volcanic Field in Arizona, and the Jemez Caldera in New Mexico.

The San Francisco Peaks Volcanic Field is an immense region (around 2,000 square miles) of lava flows and cones that is dominated by the edifice of the San Francisco Peaks, a huge stratovolcano reaching 12,633 feet above sea level. The volcanoes started erupting in the west side of the field about 6 million years ago, with later eruptions in a more eastward direction, culminating in the eruption of Sunset Crater just 1,000 years ago, making it the youngest volcanic feature in the state of Arizona. Humans witnessed (and suffered from) the eruption, since part of the flow covered an Anasazi village. The origin of the magma remains an enigma, but the eastward progress of the eruptions is suggestive of a hot spot, but this is by no means settled as an explanation.

The 600-plus cones in the volcanic field include all manner of cinder cones and lava domes, with compositions ranging from dark black basalt to light colored rhyolite. There is but a single stratovolcano, the San Francisco Peaks, but it dominates the landscape for many miles around. It is the prominent peak seen on the horizon from either rim of the Grand Canyon, and is one of the four sacred peaks of the Navajo people. The mountain grew during a period lasting from about a million years to 400,000 years ago.

There is a gigantic east-facing bowl forming the summit of the mountain. For a long time, geologists thought that it formed as a result of slow erosion of the summit of the mountain by way of streams, mass wasting and glaciation, but the eruption of Mt. St. Helens in 1980 gave them a new hypothesis: it may have formed from a giant explosion and subsequent collapse of the summit towards the east. Certainly a comparison of the summit regions of the two volcanoes lends support to the idea (photo of St. Helens by Garry Hayes, summit bowl of San Francisco Peaks courtey of the USGS). 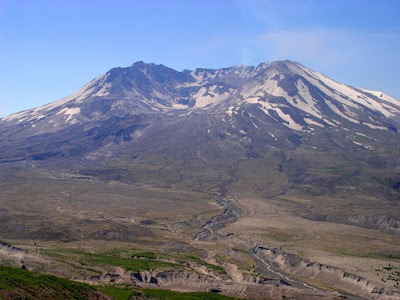 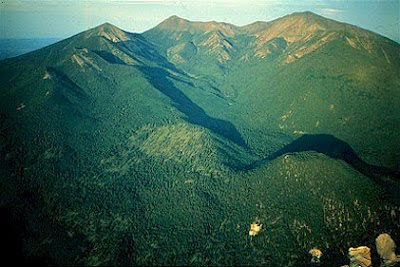 Even more intriguing is the idea that we are looking at what may briefly have been the highest point in the lower 48 states and Hawaii. Projecting the lava flows along the broken edge of the summit ridges upwards produces a former volcanic summit that may have reached as high as 16,000 feet, about a quarter mile higher than Mt. Whitney in California.
Posted by Garry Hayes at 2:37 PM

I could very well be wrong, but I thought Mt. Bill Williams was also thought to be a stratovolcano?

Thanks for the comment. You aren't far off, as it comes down to definitions. Stratovolcano and composite cone are used so interchangeably that the fact that they are different is often lost in translation. Bill Williams and Kendricks and Mt. Elden are complex overlapping multiple domes, mainly composed of dacite and rhyolite. They are larger than single lava (plug)domes, and such mountains are often classed as composite cones. What they lack is any sense of layering (ash and lava flows) that defines a stratovolcano. I have the same problem defining volcanoes here in California, where Mammoth Mountain has a complex structure, but is not really a stratovolcano as strictly defined.