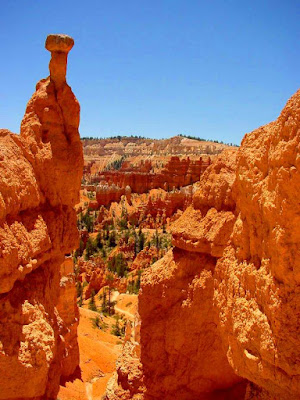 With my last post on hoodoos at Kasha-Katuwe Tent Rocks and the distinctive landforms to be found there, it is mere coincidence that I am reading a book right now called "Hoodoo" by Susan Cummins Miller. It is a murder mystery set in the Chiricahua Mountains of southeastern Arizona. The hook? The protagonist is Frankie MacFarlane, a community college geology professor who gets involved in a series of murders while dragging a group of students around on a field trip. Given my personal bio, I'm not really sure why I find such a plot interesting....

I've enjoyed Miller's stories (this is the fourth in a series) for a number of reasons. For one, it's nice to have an author that gets the setting right. I loved Tony Hillerman's mysteries, and his understanding of Native American culture was extensive, but I would get tripped up when all of a sudden his detective was stumbling around in limestone caverns at Lake Powell, which is not likely. I spend a fair amount of time in some of the places Miller writes about: Riverside, the Mojave Desert, eastern Nevada, and others. She captures the sense of these places well. And, much of the plotting is plausible. I love reading Thomas Perry novels but no real human being could survive the assaults his protagonists suffer without going absolutely nuts from PTSD. Or being dead about 30 pages into the story. Miller's mysteries are more character-driven, and less action-driven. Finally, being not a literary reviewer, I will simply say I enjoyed having enough clues to be able to have an inkling, if nothing more, of who the murderer or murderers were.
It's nice that we geologists get to have a few literary heroes (check out the Sarah Andrews series of mysteries with the Em Hansen character for another example). For some other mysteries with a great sense of place, be sure to check out the Nevada Barr and Tony Hillerman novels (my criticisms above are trivial, really). One more series you may have missed are the Jessica Speart novels with a Fish and Wildlife Service agent as the protagonist.

Did I forget anyone?
Today's photo is some of the most famous hoodoos of all, those at Bryce Canyon National Park in Utah.
Posted by Garry Hayes at 6:05 PM