Geologic Change in Yosemite: Remembering the Happy Isles Slide of 1996 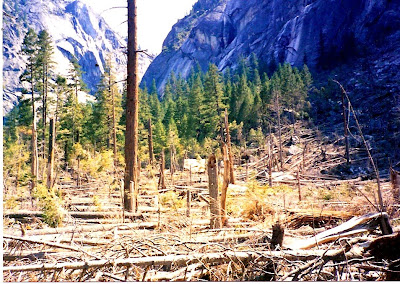 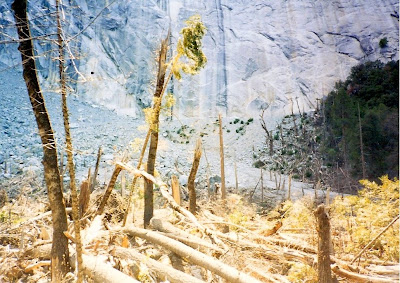 I was looking for something else in the massive pile of old slides and photographs at the department today, and ran across a pair of photographs of taken a few weeks after the Happy Isles Rockfall of 1996, one of the more damaging historical mass wasting events in Yosemite Valley. The pictures recall a flurry of posts last spring about the Ahwiyah Rock slide near Half Dome. The 1996 event killed one person and severely injured another, destroyed a food stand, and damaged the Happy Isles Nature Center.
The rock involved in the event was a slab of exfoliated granitic rock roughly the size of a football field that broke off from the top of the cliff near Glacier Point, slid for several hundred feet and then fell 1,800 feet, hitting the floor of the valley at a speed of something over 200 mph. The rocks exploded on impact generating an airblast that toppled 1000+ trees. U.C. Berkeley has an excellent analysis of the slide here, and formal article from the GSA Bulletin can be found here.
Regrowth of trees and shrubs has obscured much of the damage, but the Happy Isles Nature Center has a nice exhibit and viewpoint; walk out the back door of the museum to find it. The slide was not the first in the area. Huge talus piles cling to slopes below the breakaway point, and a much larger prehistoric slide has been mapped beneath the thick forest. It forced the Merced River into a new channel, and contributed to the formation of the marshy area west of the campground.
Posted by Garry Hayes at 12:19 AM

Whoaaa... how about becoming a psychic novelist Garry? It's as if this post may have encouraged the Royal Arch rockfall! Spooky cool.

My brother was killed in that rock slide. Emiliano Morales he was 19 yrs old. Tomorrow will be 17yrs. I miss you so much Emi ! I love you, your sister Yvonne Ybarra

My brother was killed in that rock slide. Emiliano Morales he was 19 yrs old. Tomorrow will be 17yrs. I miss you so much Emi ! I love you, your sister Yvonne Ybarra

I am sorry for your loss...

Sorry too, Yvonne. I narrowly escaped this rock slide myself (if it had not been for the fact that the others in my party did not want to go to Half Dome we would have been trapped up there most likely; had it not been for so many people at the food stand - likely getting ice cream... seem to remember that - we would have been at the food stand). We were away from Happy Isle for not even 30 minutes. It was pure chaos and even worse for those who were still at Happy Isle. I remember it was a Wednesday and there was another rock slide that Friday - the last day we were there that year. Happy Isle was closed off pretty much for a year I would guess and if not blocked off I know one thing: when we went back the next year Happy Isle and the beginning of the Vernal/Nevada Falls hike (I mean beyond the Happy Isle point; seem to remember that it started a distance away from where it used to start at but that might be a bad memory of mine, seeing as how long ago it was) was very very different.

I was trying to find the information about how big the rock was but not here but figured since I was there I would share my thoughts too. Ah, wiki says 162,000 tonnes!

Wow, I was eleven years old when this happened. My family was staying in the Upper Pines campground right under the slide. My family was in the parking lot to meet up with my aunt and uncle...about to go to a Ranger Rick show. I remember hearing the most thunderous noise I've ever heard, looking up, and seeing a wall of dust speeding at us and engulfing us. Never saw anything like that again until I saw the footage of the Twin Towers collapsing. Same rushing cloud of dust billowing towards you.