Time Beyond Imagining: The End of the Story, or the Beginning? 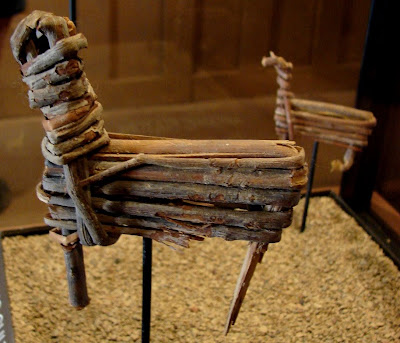 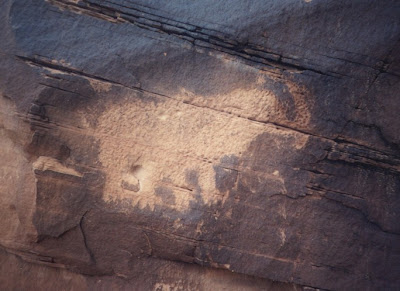 Picking up from the ecologic trauma of my previous post, there was, in fact, a significant addition to the collection of animals living in the Colorado Plateau region in the last 10,000 years or so. It was different than any creature that existed in the region over the last 2 billion years, in that instead of living within and being adapted to the ecosystem, this creature sought to change the ecosystem to meet its own needs and desires. I am referring to humans, of course.
The first humans were hunters and nomads who made spears and atlatls to bring down large game. According to the anthropologists I know who still speak to me (they argue a lot about this stuff; it's nice to know how civil we geologists always are) they either brought about the extinction of the megafauna, or had nothing to do with the extinction. Call us the suspects or the unindicted co-conspirators in the affair, or the totally innocent bystanders. But the fact is, our cousins and forebears got to see these animals and lived among them. Some of the oldest artifacts ever found in Grand Canyon National Park are split-twig figurines of large mammals, dating to three or four thousand years ago. Even more intriguing are two petroglyphs from Utah that seem to represent a mammoth or a mastodon. They are controversial, with some saying that the rock art does not show the necessary antiquity to be the real work of an eyewitness to these extinct elephant relatives, but in any case, humans were witnesses to one of the great extinctions in the geologic history of the world, and the Colorado Plateau. And they may have caused it.
I paint with very broad strokes here, but we humans have a history of coming into a new region, using the resources, and living beyond our means until the resources are gone. Then, some kind of tragedy depopulates a region (famine, disease, invasion), so we move on and start again somewhere else.

The Colorado Plateau was first occupied by hunters and nomads who left little sign of their passing, aside from stone tools and simple shelters. Around 2,000 years ago, people began planting the food they consumed, and started building more substantial shelters and pithouses. The climate favored agriculture, and over the centuries they added new crops, including maize. The population of the plateau country expanded to levels similar to the population living there today, but by 1200 AD, something was going very wrong. A decades-long drought disrupted food supplies, and soil erosion was rampant. The architecture of their dwellings changed to a more defensive orientation, including entire villages built in high alcoves in the sandstone. By 1300 AD, pretty much the entire region had been depopulated.
Over the next few centuries, other bands of people arrived, the Navajo, the Utes, the Apache, and they lived and thrived until the region was invaded by waves of Europeans and then Americans. It seemed that everyone who arrived now was looking for something of value, be it gold, or beaver pelts, or grasslands for grazing, or coal for mining. Sometimes they found nothing and left again. If they did find something of value, they mined or grazed or hunted until the resource was exhausted, and the region would be once again abandoned.
And that is why I feel lucky to be living in an extraordinary time. Some time in the last century, there was a small group of individuals who saw a value in the land of the Colorado Plateau that was not related to money. They fought for the preservation of the best parts of the plateau country as national parks and monuments, set aside for the people of the country as a place of recreation and introspection. It was a new idea, and it was not without problems. The earliest parks were seen by their creators as tourist gold mines, and to draw tourists all manner of hotels, railroads, roads and other "improvements" were constructed. Predators were mercilessly killed off to build up deer herds. Powerful enemies were lined up to fight the establishment of every one of our national treasures, and they fought on even after parks were formed, using war and depression as an excuse to exploit valuable park resources. But through it all, the parks were preserved for the most part in a condition resembling their primeval state. They were preserved for the purpose of learning and for research.
The Ken Burns documentary "The National Parks: America's Best Idea" wraps up tonight on PBS stations. It is a stunning piece of work that explores the human journey that resulted in our national park system, an American idea that is now emulated around the world. It has been a revelation to see the story laid out in chronological order, with all the mistakes and misjudgements by people we see as park pioneers and heroes. And still, we have a park system that the American people, and indeed the world can be proud of. It is, as special unique landscapes open to all people, the best embodiment of the American ideal that all people are created equal. If you missed the first five episodes, they can be watched in their entirety on the website linked above.
And with this post I have reached the end of my chronicle on the geology of the Colorado Plateau! A project I thought would last for a month or so and include maybe a dozen posts grew into something much larger. I have no idea how many of you have followed along from the start, but I will put the posts together into a chronological unit very soon if you want to or dare to catch up. I hope you have enjoyed this journey as much as I have had writing it. I also want to thank the many people who commented and offered new information as we journeyed along.
Oh,gee... now I have to think of something new to write about!
Posted by Garry Hayes at 4:46 PM

Thank you for great posts! I learned a lot which came in handy last ten days as I drove from Albuq. NM to Fresno, CA via Zion, Mono Lake, Yosemite, etc. The West is the best! I look forward to more posts from you.