The Airliner Chronicles: Epicenter of a Geological Education 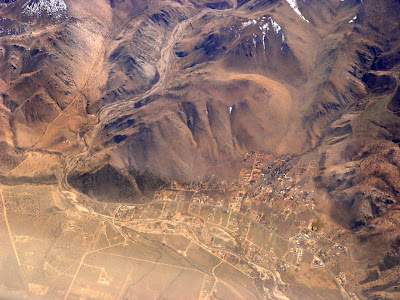 I had forgotten how much I enjoyed going through my aerial shots when I first started blogging, so I am reviving my Airliner Chronicles, just for the heck of it. I was on a flight to Williamsburg a few years ago when I realized with a start that I was flying right over my thesis area. Though I was never really thrilled with the final product, I did in fact complete the thesis and they let me graduate, to the heartache of 20 years worth of community college students who have taken my classes.

For my thesis, I was looking for evidence of Holocene faulting in the Sierra Nevada/Great Basin Boundary Zone in the area around the Sweetwater Mountains and Antelope Valley. The West Walker River flows through the area, on its way to evaporate in the sump of Walker Lake, a remnant of Pleistocene Lake Lahontan.

Some of my relatives had a house in Walker, California, that served as my base camp for the summers that I spent exploring the region (Walker is the village in the lower half of the photo; the house is one of those on the river just left of center). As can be seen in the photo above, the West Walker emerges from a deep canyon carved in typical Sierra Nevada granites, and forms a modified alluvial fan at the south end of Antelope Valley, a deep fault graben marking the edge of the Basin and Range Province. The bank of the West Walker River served as a wonderful outdoor lab on hydrological processes. Over a 15 year period I was able to monitor drought conditions, floods, bank erosion, and riparian vegetation changes. I learned a great deal, but there was nothing in my experience on the river to compare with the events of New Years Day, 1997.

For those of you who lived in California or western Nevada at the time, the floods of 1997 will be remembered for a long time. A record snowpack coated the Sierra Nevada, but a Pineapple Express, a warm tropical storm out of the Pacific, took aim at Central California. Precipitation amounts in a two day period reached as much of three feet, mostly falling as warm rain on the snowpack. Record flows were recorded on numerous rivers, but I don't think any of floods smashed the old records the way the West Walker did...until 1997, no flood had ever exceeded 6,800 cubic feet per second. On January 2, 1997, the river hit 12,500 cfs. This is an estimated 500 year flood (a one in 500 chance of occurring in any one year).

The effects on the little village and surrounding region were profound, to say the least. Highway 395, the primary north-south artery between Reno and the Los Angeles region, was simply erased in the ten miles upstream of Walker. The ripped up road fragments, granite boulders, and uprooted trees became battering rams that pounded the unprotected hamlet of 500 or so people. Numerous houses, cabins and businesses were washed away. Much of the floodplain adjacent to the river channel was buried under several feet of gravel and cobbles, and the original river course had been split into two or three separate channels. Flooding in Reno and Carson City tied up emergency personnel, so the people of Walker were left to their own devices, and the hard work of the handful of highway patrol officers and county sheriffs in the area. Eventually a helicopter was brought in to rescue some stranded motorists. There weren't any television cameras recording the drama; they were too busy elsewhere.

I was not there to see the worst of it. I knew from the news reports that terrible things must be happening up there. It was about two days before we found a route into town, and the property was a mess. Against all odds, the house on the river survived the onslaught. Knowing the odds of a flood, my relatives had built an earthen berm around the house, almost like a fortress wall. The river had flowed full force into the berm, and was in the process of undercutting the foundation when a large pine got wedged into the opening, diverting the flow to the south (and eventually burying their truck in the mud). Their doors even held back the mud, and they might have been ok...except for the cat-door. Mud and silt flooded into the house to a depth of a foot or two. There would be a lot of cleaning up to do in coming months. Thankfully the relatives had flood insurance.

The following month had only one cold storm, and that February was one of the driest on record. No one minded. Clean up went on, and eventually the Army Corps of Engineers decided they wanted to put the river back where it used to be. This was an impressive process to watch. They had really big bulldozers to clear the old channel of debris, and I was sitting on the riverbank the day they made the cut that diverted the prodigal river back where it was supposed to be. We cheered as the river came back home...

After that flood, my relatives decided they had other priorities for their lives and sold the house. The new buyer found out that the legal floodplain level was now two feet higher than it had once been, and the house was now out of compliance. He solved the problem by taking the entire house and lifting it up eight feet and inserting a garage and basement underneath. I didn't recognize it the next time I came through town.

Do you have a good flood story?
Posted by Garry Hayes at 5:14 PM

You absolutely have to respect the power of water.

In 1996, Washington State also had the warm rain on top of snow pack. I was a volunteer on the south side of Mt St Helens when all three roads were washed out and I found myself living on a forested island. Was helicoptered out then waited 2 months for road repairs to I could retrieve my truck and belongings.