Prius and Honda, Ichthyosaurs and Dolphins, and Mary Anning 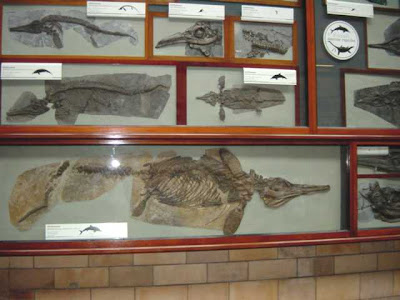 What do the Toyota and Honda gas-electric hybrids have to do with Ichthyosaurs and Dolphins? Devilstower offers up a nice discussion of convergent evolution this week over at DailyKos. The post explores why Australia has an ecosystem of marsupials who bear a striking resemblance to placental animals in other places, why bats and pterosaurs are so similar, and why sharks, dolphins and Jurassic sea-going reptiles called ichthyosaurs look like closely related animals when they are not. It also provides a decent explanation about why Charles Darwin and Alfred Wallace both hit upon the idea of natural selection as a driving force behind evolution, and how the idea was facilitated by an early 1800's fossil collecter named Mary Anning. It's worth checking out! The ichthyosaur display in the picture is at the London Natural History Museum. It was an impressive wall of fossils, of which this is only a small part.

It's Earth Science week, by the way! What will you be doing this week to promote an understanding of climate change?