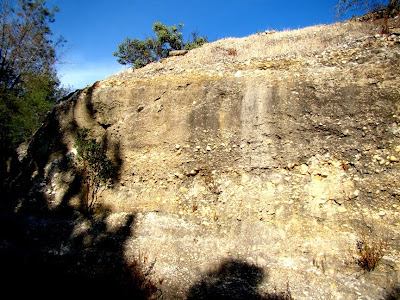 Continuing our journey through the Sierra Nevada Mother Lode on our field studies trip last weekend, we arrived at Chili Gulch south of the town of Mokelumne Hill to talk about another way of wresting gold from the earth. We were gathering at a rather poor roadcut when a local rancher drove up and offered to let us onto his property where the walls of an old hydraulic mine could be seen. I was thrilled (ranchers don't always like geologists, as many of you know). The picture above shows some of the Tertiary "Auriferous" Gravels exposed in the old quarry wall. These gravels were obviously carried and deposited by a vigorous river, but at this point we were several thousand feet above the present-day Mokelumne River. How did river gravels end up near the top of a mountain??

The trick is to realize how much the topography of the Sierra Nevada has changed in 50 million years. If one were able to travel back to that era, a flight over the Mother Lode would have revealed a shoreline where the Central Valley is today. The shoreline would merge into swampy estuaries and lagoons, and every so few miles along the coast a large river would be flowing into the sea. Looking eastward would reveal a surprise: where the present Sierra Nevada Crest pierces the skyline there would be...no mountains! They had not yet risen (I hereby acknowledge that there is some fierce debate about the uplift history of the Sierra). Instead, the rivers would be flowing from sourcelands in central Nevada, or maybe even farther north and east (one has to wonder where the diamonds came from). The path of the rivers through the Sierra is fairly well established, and becomes more speculative as one travels farther east (see the map below).

Ash eruptions and lava flows covered parts of the Sierra Nevada while the mountains were rising, and rivers were diverted to their present-day channels. The rivers carved deep canyons as the mountains rose, isolating the patches of older stream gravels on the adjacent ridge tops.

It didn't take the forty-niners long to dig up and process all the gold-bearing gravels in the present-day rivers of the Mother Lode: they were pretty well played out by 1853. Some enterprising (i.e. hungry) miners started exploring the slopes and mountains above and soon found the Tertiary River Gravels, but there was a problem: they needed water to sift through the gold-bearing sediment, and water was not abundant on the mountain ridges. 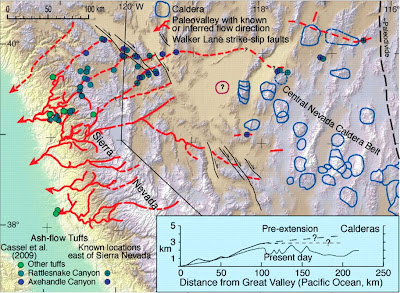 It did not take the miners very long to come up with an ingenious and devastating solution to their problem. They built reservoirs in the high country near the Sierra Crest, and diverted the water before it flowed into the deep canyons. Using literally thousands of miles of flumes, canals and penstocks, they delivered water to the mines on the mountain tops, and using giant nozzles (called monitors) they blasted the cliff with stream of high pressure water (photo below). They had (re)invented hydraulic mining, one of the most destructive human activities to ever affect the Sierra Nevada and adjacent Central Valley. 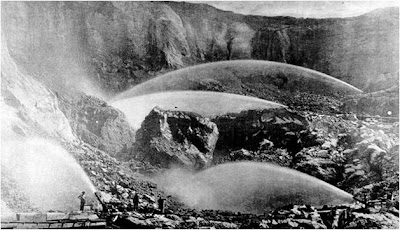 To capture the gold, large riffles were carved in the rock where the water left the mine quarry. Hundreds of pounds of mercury sat in the riffles to amalgamate the gold, although the sheer quantity of water swept much of the mercury (and plenty of gold) downstream. Of course, ALL of the loosened debris was sent downstream as well, and there was a LOT of it. What was left behind was widespread devastation. 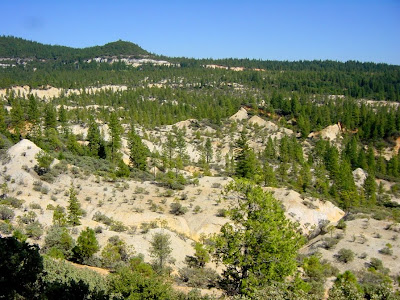 The hydraulic pits were cleared of all topsoil, and many square miles of forest were washed away, sometimes to a depth of several hundred feet (the original surface of the mine shown above coincided with the gray ledge on the far ridge). In a few places, like Malakoff Diggings State Park, the old quarries have taken on a vaguely Bryce Canyon-type beauty, but that is the exception.
Downstream, sediment choked river channels many tens of feet deep. In the picture below, the full thickness of the tailings can be seen in the terrace at the top of the photo. The stumps in the channel are actually the fifty foot level of mature trees that were buried in the gravel. The mud and silt continued downstream to fill the shallow channels of rivers in the Central Valley. Flooding became a yearly problem in towns like Yuba City and Marysville. About 40% of San Francisco Bay filled with mud from the mining operations. The total amount of sediment (1.5 billion cubic yards) was eight times what was moved to dig the Panama Canal. 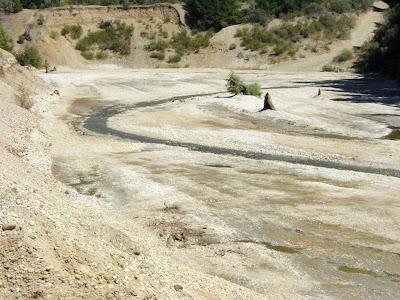 The devastation of the mining finally drove the victims to court, and in 1884 the Sawyer Decision declared that the hydraulic mines had to confine the waste sediments to the mine property. The ruling effectively ended large-scale hydraulic operations in the Sierra, but the not pollution problems. Mercury continues to contaminate the mine properties, the sediments downstream, and San Francisco Bay. At some of the worst mine sites, an ounce of mercury could be panned out of two pounds of sediment.

As an aside, a few years I was watching the movie "Pale Rider", the Clint Eastwood western. It was set in the Gold Rush era Sierra, and the good guys were the gentle placer miners, who with their gentle and beautiful wives and children gently pulled gold from the little streams near their village. The bad guys of course were hydraulic miners who wanted to destroy the bucolic little town. The pictures of the hydraulic mines were well done, and there was, as I recall, a mention of the Sawyer Decision that ended the mining. They solved all the problems at the end of the movie by shooting at each other, of course.
Posted by Garry Hayes at 8:14 PM