So, What's Wrong With a Bit of Arsenic, Mercury and Sulfuric Acid in Your Drinking Water? 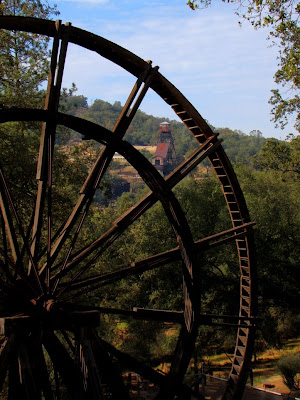 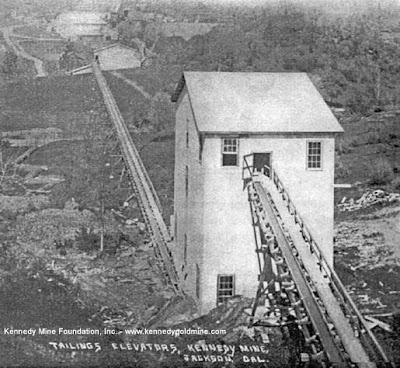 Top photo by Garry Hayes, bottom photo from the Kennedy Mine Foundation
The mining history of California's Mother Lode is fascinating, and in many ways downright scary. It is astounding to realize the length mine owners went to wrest those little flakes of metal from the ground, without regard to the Native Americans who inhabited the region for thousands of years, without regard to the communities of people both near by, and far downstream, and with a shocking disregard for their own workers, the men who risked their lives daily deep in the earth. And of course, the environment was an unknown concept. The gold was there; it therefore had to be pulled out. It was all about money, of course.
On our field trip this last weekend, we had a chance to explore some of the mine complexes in and around Jackson, on Highway 49 in the Sierra Nevada Mother Lode. Yesterday's post was about our tour underground at the Sutter Creek Mine. Another of our stops was at a fascinating city park, the Kennedy Mine Tailings Wheels.
The Kennedy Mine was one of giants of the hard rock mines of the Sierra Mother Lode. From 1860 to 1942, the mine produced around 1.7 million ounces of gold, worth about $17 billion at today's prices. At the time of the mine's closure (because of World War II), the workings had reached a depth of 5,912 feet, making it one of the deepest mines in the world (there are mines in South Africa that are more than 12,000 feet today). According to different sources, the length of the underground workings totaled at least 50 miles (and maybe over 100).
The earliest miners would have worked with candles (i.e. open flames), hand operated drills, and black powder for explosives (i.e. not so good in presence of open flames). Innovations in the late 1860's and 1870's included carbide lamps, steam powered drills, and dynamite (courtesy of Nobel, of the Nobel Prize). Still, not the best of work environments. No one wore hardhats. Miners operating the drills (called "widow-makers") got paid a lot more than everyone else, but developed silicosis within a few years, and died. Cave-ins and rockbursts were not uncommon events. One of the saddest episodes was in 1922 when a fire trapped 47 miners at the 4,600 foot level of the adjacent Argonaut Mine. Miners at the Kennedy worked feverishly to drill a tunnel to the Argonaut passage, but they were too late and the miners were lost.
The gold ore was brought to the surface and crushed using huge stamp mills. The tailings were treated with arsenic and mercury to remove the gold, and then stacked in huge piles around the mine property. Upon exposure to the atmosphere, many of the sulfide minerals were transformed into strong acids. Being upstream from the town of Jackson, the poisons were seeping into the domestic water supply. By 1914, the mine was "encouraged" by lawsuits and court actions to build a tailings reservoir a half mile away, and over two ridges from the mine property. The wheels were a unique invention used to transport the tailings slurry from the mine to the reservoir. The wheels had dozens of buckets that picked up the mush from the base of the wheel, and dropped them forty feet higher onto a flume that carried the debris to the next wheel. Four wheels were needed in total.
Jackson is a quiet tourist town today, and the wheels provide a photogenic stop on a tour of the Mother Lode. It certainly wasn't always picturesque, or quiet. The 100-stamp mill, and the wheels would have run 24 hours a day. The older photo (from the Kennedy Mine Foundation) shows the barren slopes and the spartan buildings that housed the wheels. The buildings were removed during World War II, and two of the wheels collapsed, in 1963 and 1971 (history of the wheels here).
The last owner of the Kennedy Mine had purchased the abandoned site in 1961, and her will stipulated that the property be preserved as a wildlife area and that the mine be protected as a historical site. The Kennedy Mine Foundation was established to do this in 1996, and they offer above ground tours of the mine site for a modest fee (especially for school groups).
Posted by Garry Hayes at 1:39 PM

At least by putting in the wheels they tried to do the right thing. Nice that it's been preserved as a historic site.