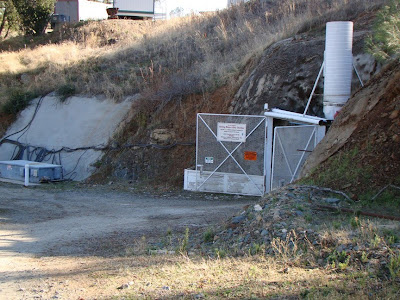 It's late October, so it was time to introduce some of my students to the history of the Sierra Nevada Mother Lode, the site of the California's 1848 Gold Rush that brought hundreds of thousands of people to the west coast of the United States, and forever changed life in the Sierra Nevada and the rest of the state (and not for the better if you happened to be Mexican or Native American). Interest in gold has expanded as the price these days has reached $1,050 per ounce.

We explored Highway 49 from Sutter Creek to Columbia, one of the richest sections of the Mother Lode. Part of the trip was an exploration of the Sutter Creek Mine (the Lincoln Project), which offers tours of part of the underground workings of this off and on gold prospect.

The picture above is the entrance to the mine shaft. The white cylinder on top of the opening is the ventilation system that keeps fresh air flowing through the mine. 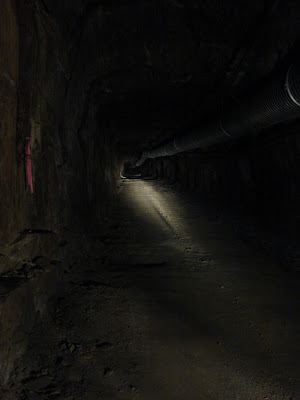 We were taken by modified jeeps about a quarter of a mile into the mine. Unlike most of the Mother Lode mines, the Sutter Creek operation is fairly horizontal. It is just a bit eerie to leave the daylight behind and to go plunging into the darkness. The ventilation system is quite noisy. One of the people on the tour (not one of my students, I'm glad to say) pretty much lost it and had to be taken back out (she was not aware that the tour was an underground tour). 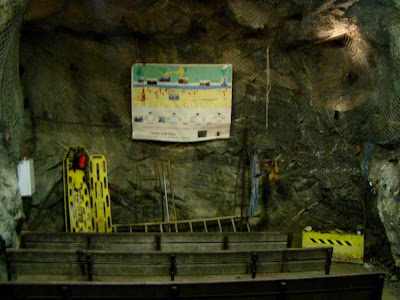 We were taken to the safety room, a sort of refuge in a time of crisis for the miners. The room has strongly reinforced walls, air and water lines, first aid equipment, and communication lines to the surface. It also makes a nice little auditorium for talking about the early history of mining for gold. The demonstration of working by candlelight, as the earliest miners did, was especially effective. If you were wondering about the title, the canary refers to the actual practice of carrying canaries in the mine to monitor oxygen levels, and powder monkeys were the young men and children who were responsible for carrying dynamite around in the mine. 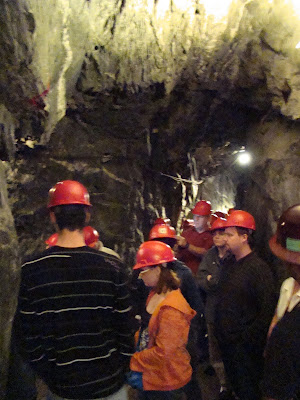 We walked through a section of tunnel that followed the gold bearing quartz veins, and looked at "gold" exposed in the quartz above our heads (I don't want to sound skeptical, but the "gold" is in a different place every time I tour, and it is always three or four feet above our heads where we can't see it well...). The equipment they used in the old days was downright, even insanely dangerous. Not just the explosives; the drills kicked up large amounts of silica the miners inhaled. Many died after just a few years from silicosis. But the pay was good... 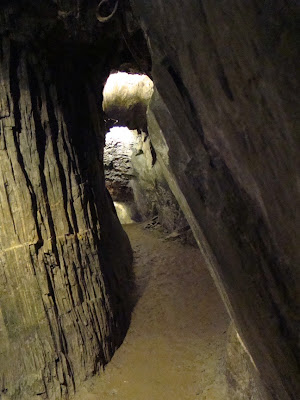 The operators of the tour do a pretty good job of describing historic and modern methods of mining for gold, although it may stretch your budget if you are there on your own. They offer a decent discount for student groups such as the group we had yesterday. If you are interested in checking it out, their website can be found here.
After our tour, we headed up the mountain towards the town of Volcano for our second underground adventure, at Black Chasm Cavern. That will have to wait until the next post!
Posted by Garry Hayes at 2:02 PM

Lucky students. Interesting tour. I like being underground, natural conditions perferred. Great contrast going to a mine and cavern. Where do I sign up for these field trips? ;-)

I don't think they want you to take any gold samples! Maybe they don't have metal detectors like at some high-grade gold mines.