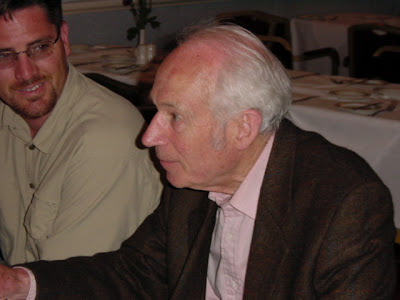 I've received word from Dr. Eric Grosfils at Pomona College that one of the professors from my days at Pomona has passed away. Dr. McIntyre was a truly unique teacher, challenging, sometimes frustrating, but an excellent professor. I look back and I realize I was not as ready for college as I thought I was when I arrived at Pomona in 1977. I had transferred from the local community college, and though I had done well enough, I was now entering one of the most highly regarded and challenging geology programs in the state. I felt like a fish out of water!

Dr. McIntyre taught a class on Global Tectonics. I thought was going to be told about divergent and convergent boundaries and evidence for continental drift and other basic "stuff". Instead, we were given the keys to the library, and a list of the original classic papers in plate tectonics to study so we could learn for ourselves not the basic facts, but what the original evidence was, what the detractors and opponents had to say, as a preparation to analyze the arguments in class. As a student in Dr. McIntyre's class, I had become, in essence, one of the researchers fighting the academic battles of the late sixties and early seventies. It was uncomfortable for me at the time, and yet a valuable life-changing lesson. Science isn't facts. Science is a process, a sometimes difficult process for gaining knowledge.

Dr. McIntyre could be almost imperious at times, and calling him "Donald" could earn a person a cold stare and silence. Yet most times, he was a warm and friendly person. He and his wife hosted a Christmas party for the students in the department every year I was there. It was a nice gesture for students who were sometimes several states or entire oceans away from their homes. I can remember him pulling a volume off the wall of his personal library to show me a passage on the history of mountain climbing in Scotland. The author had said that his climbing partner, one Donald McIntyre, if he ever fell off a cliff, would be licking the rocks on the way down to better identify them!

I worked in the department at Pomona for a couple of years while I decided the next step in my own educational journey. Serving as a laboratory and field assistant to Dr. McIntyre and the other professors at the school was as good an education as anything I ever learned in a classroom. I moved on in 1982. Dr. McIntyre retired and moved home to Scotland in 1989, and I occasionally heard of his activities through the school alumni announcements.

I finally was able to journey to Scotland in 2001, and my students and I were able to share a meal with Dr. McIntyre in Inverness. It was a wonderful evening. He was, as always, a gracious and polite conversationalist. It was good to see him again.

These are some of my personal remembrances of working with Dr. McIntyre. I invite you to see a bit more of his lifetime accomplishments at his website. He will be missed. The announcement from Pomona College follows:

Donald B. McIntyre, Professor Emeritus of Geology, died on October 21st in Scotland, where he had lived since retiring from the College in 1989. He was 86 years old.

A native of Edinburgh, Professor McIntyre received B.Sc., Ph.D., and D.Sc. degrees from the University of Edinburgh and taught there before joining the Pomona faculty as an associate professor in 1954. The following year he succeeded A. O. Woodford as Department of Geology chair, a position he held for almost three decades. Professor McIntyre's research interests were diverse, and his achievements earned him numerous honors, among them Fulbright and Guggenheim fellowships. He was, his colleague Donald Zenger once wrote, "a scholar of the highest order."

Professor McIntyre was also a gifted teacher, winning two Wig awards here on campus and, in 1985, being named California Professor of the Year by the Council for the Advancement and Support of Education. In nominating him for the latter award, R. Stanton Hales noted: "It is known that one good question asked of McIntyre will earn at least two hours of personal instruction."

In lieu of flowers, members of the family have requested that donations in Professor McIntyre's honor be directed to one of two funds:

-- the Ewen McIntyre Upper Springland Fund; checks should be made out to the fund and sent to it c/o Ann McIntyre (17 Beaumont House, 15 N. St John's Place, Perth PH1 5SZ, Scotland UK). My understanding is that this fund helps support the home for the disabled where Donald and Ann's son, Ewen, currently resides.

-- the McIntyre Geology Fund at Pomona College (also called the Donald B. McIntyre-H. Stanton Hill Geology Fund), established in Donald's honor by H. Stanton Hill ('33) and Mary C. Hill in 1987; gifts/contributions intended for this fund can be sent to Pomona College, c/o Don Pattison, Office of Donor Relations, 550 North College Avenue, Claremont, CA 91711. In his remarks Stanton Hill directs that "this fund will be for the benefit of the students taught by Donald's colleagues and successors."

In addition, if anyone would like to share personal recollections of Professor McIntyre with his family and does not wish to send them to Ann directly, we would be pleased to receive, collate, and forward them along (please send such comments via email by December 1st, subject "Donald McIntyre", to https://webmail.yosemite.edu/owa/redir.aspx?C=4f27de7267174b68955d4b5890d81da5&URL=mailto%3aegrosfils%40pomona.edu). In a future communication, the department will also discuss developing plans for honoring Professor McIntyre at our annual alumni dinner, scheduled this year for the evening of February 17th, 2010.

The loss of such a highly regarded and cherished member of our community is never easy, and our thoughts are with Professor McIntyre's family in these difficult times.

You speak so highly of him, must have been a great professor.