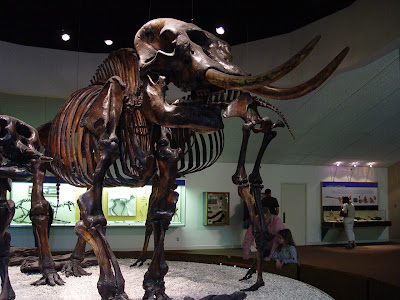 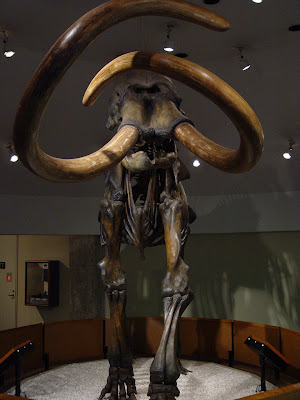 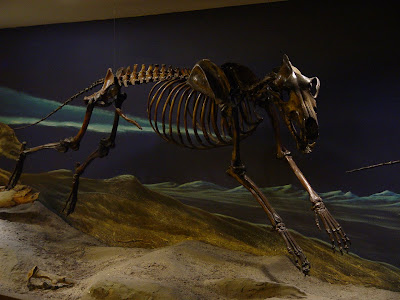 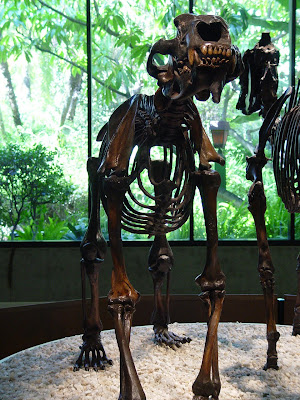 ...the massive creature wandered slowly through the dry grasslands. It had been a long hot year, something that had been all too common during the decades the animal had been alive. Foraging was difficult, and the creature was near the point of starving. The large elephant-like animal felt vaguely lonely; it was a herd creature, but it had actually been years since he had seen another of his own kind. He was aware of the pack of predators that had been following him for several days now. They too had the look of hunger, too thin, gaunt, with intense yellow eyes following every movement of the mammoth, but not quite desperate enough to try attacking such a huge beast. They could see it was weak, and they hoped for an opening.
The elephant could smell water. There was stream nearby, maybe a promise of green grass. The trickle of water lay at the base of a dangerously steep slope, but the mammoth was becoming desperate. He carefully stepped over the ledge and started down the rocky slope towards the water. Disaster! Somehow a rock slipped, and the animal lost his footing and tumbled down the slope. There was a crunching sound, and a horrific pain shot through the creature's leg. Something was terribly wrong now, and despite his struggling, he could not stand. The wolves heard the commotion. What was a tragedy for the mammoth was the temporary salvation for the giant wolves. They moved in, and in the moments that followed, the very last individual of the elephant clan on the Colorado Plateau passed into oblivion. Though they ate their fill that day, the wolves were doomed too. In these final centuries and decades of changing climate, they would find fewer and fewer of the large creatures they had evolved to consume, and they too soon passed into oblivion...
The story I've just told is entirely fanciful, with no direct basis in reality. I'm not describing some paleontological excavation, because we don't have one that is known to be the final individual of a species. But the fact is, numerous species became extinct during the last 10,000 years, and there was a final living individual mammoth. There was a final pack of dire wolves, though not at the same precise time. My little story could just as easily have included human beings who stood over the dying mammoth instead of wolves. Anthropologists argue the point.
The last few thousand years of geologic events of the Colorado Plateau are really mostly biological in nature. And to me they represent one of the saddest episodes in the entire two billion history of life in the region. In the last two million years before the present, the canyons and mountains, mesas and buttes of the Plateau looked much as they do today with one major exception. An ice age gripped the world, with a dozen or more cold periods when ice advanced across the northern tier of the North American continent. Though the ice never reached the plateau country, the climate was cooler and wetter, and forests covered what are now sagebrush flats, and sagebrush covered what are now barren desert expanses.
In this environment of rich vegetation growth, a complex ecosystem evolved, with numerous large species of plant foraging mammals, the megafauna of North America. The species that lived on the plateau included mammoths (2nd photo), mastodons (1st photo), camels, giant sloths, bisons, horses, musk ox, bighorn sheep, and mountain goats. They were preyed upon by giant American lions (4th photo), saber-tooth cats, dire wolves (3rd photo), and occasionally by short-faced bears. The lions were bigger than their African cousins, the wolves and bears bigger than their living relatives by a factor of 50%. They had evolved to take down large prey.

These species lived across the continent, and the pictures above are actually specimens from southern California. They are examples of some of the incredible discoveries from the La Brea Tar Pits, where animals were trapped by the hundreds in the black goo. The animals thrived across the land for several million years, but around 10,000 years ago nearly all of them went extinct. Their disappearance coincided with two events: the end of the latest ice age, and the arrival of humans on the North American continent. Which brought about their end? Was it a combination of factors? We don't really know yet. There have even been some suggestions by researchers that an asteroid impact affected the North American megafauna.
In any case, I feel a sense of loss that these animals are gone. Part of the adventure of visiting a national park like Yellowstone is to see the bare remnants of this megafauna: the moose, elk, buffalo and grizzly bears. What an adventure it would have been to see mammoths and other giants wandering the mesas and buttes of the Colorado Plateau!
We've nearly reached the end. I have been exploring the geology of the Colorado Plateau for well over a year now, and one final major event in the geological story remains to be explored. Next time!
Posted by Garry Hayes at 12:29 AM

Life has always been a constant struggle. The DNA behind it all is like a puppet master, bringing forth forms to crash against each other.