Holy Crap, Batman! The Bat Cave is Full of it! 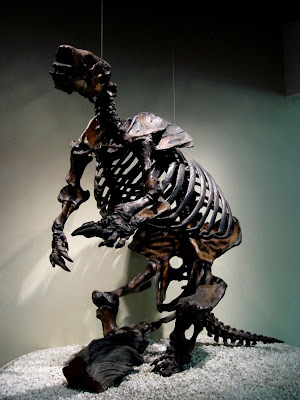 "A Tale of Two Caverns" was my alternate working title for today's blog entry, but my lower levels of sophomoric humor prevailed. This is a tale of two caves, both of which are found in the lower reaches of the Grand Canyon, and this is a continuation of a geological exploration of the Colorado Plateau that has been going on for well over a year now. The fact is, there really is a Bat Cave in Grand Canyon, and another called Rampart Cave. And they were both full of crap, as it were.

As noted in the most recent post of the series, there are hundreds of limestone caverns in the Grand Canyon region, very few of which are well-known, or even accessible. Most of them occur in a particularly difficult position, in alcoves at the top of a 400-500 foot high cliff in the Redwall Limestone. Others, including the Bat Cave, occur in the older Muav Limestone.

Bat Cave was discovered in the 1930's by a river rafter. When large amounts of bat guano were found inside, efforts began to find a way to mine the nitrogen-rich fertilizer. The cave was high on a cliff, and efforts to float a barge or to fly the product out were unsuccessful. In 1957, when a geologist estimated that the cave contained 100,000 tons of guano (worth about $10 million, in 1957 dollars), a mining corporation got serious, and invested more than $3 million constructing a tramway that crossed 7,500 feet of canyon, and climbed 2,500 feet to the south rim. The one ore cart could carry 2,500 lbs of guano and six people. It was an incredible engineering feat, although it was beset by problems. The cable failed soon after completion, and had to be completely re-hung. Worst of all, the estimates of the quantity of guano turned out to be wildly optimistic: literally 100 times more optimistic (can you imagine being the one who had to deliver this news to the boss?). Only 1,000 tons was ever produced. The venture closed down within a few months.

The cable remained hanging across the canyon. In 1960, an Air Force jet was flying far below what regulations allowed, and clipped the cable. The plane somehow remained airborne, but the cable snapped and fell to the canyon floor. The corporation was able to sue for damages, despite being shut down, and they recouped some of their losses.

The area around Bat Cave was added to Grand Canyon National Park in 1975, and for a time the NPS considered tearing down the metal frameworks of the mine, but the idea was abandoned. The cave is once again inhabited by hundreds or thousands of bats (see the Billingsley link below for a fascinating account of a 1995 exploration of the cave).

The details of the story of Bat Cave are quite fascinating. An account by one of the steelworkers who helped construct the cable system can be found in this American Heritage article. Many details of the Bat Cave mining venture and pictures of the mine developments can be found in a chapter of Billingsley et al., 1997, Quest for the Pillar of Gold: The Mines and Miners of the Grand Canyon, Grand Canyon Association, ISBN 0938216562. This book is available online; the Bat Cave article may be found in http://www.grandcanyon.org/booksmore/epubs/pillar/pdfs/chapter3_part1.pdf and http://www.grandcanyon.org/booksmore/epubs/pillar/pdfs/chapter3_part2.pdf (thanks to Wikipedia for the links).

Well, it's late, and I haven't been able to get to the story of Rampart Cave, and the photo of the strange-looking creature above, so I guess it now must be called a "Tale of One Cavern". I'll just promise to get to it in the next post!
Posted by Garry Hayes at 11:49 PM