Time Beyond Imagining: Why Can't We Touch the Venus de Milo? 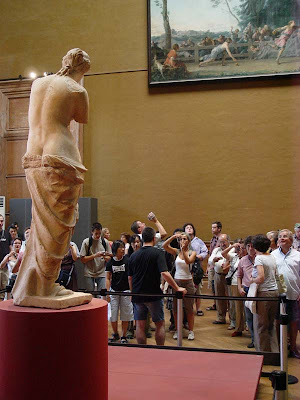 Don't even think about it, Buster... 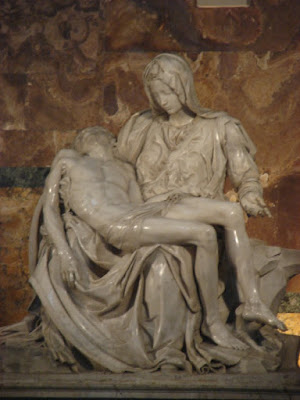 A tragedy compounded by a rock hammer... 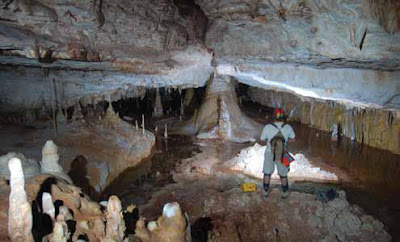 A masterpiece...
The painting in the Louvre that sits at the upper right hand of the top photograph has the distinction of being quite possibly the most ignored classical painting in the world. Why? It has the misfortune of being behind everyone who shows up at the Louvre hoping to see the Venus de Milo. I don't even know what it is called.
As a geologist, I have always had a great appreciation for sculpture, the act of bringing out beauty from rocks that are already beautiful. Of course, it calls to mind the old joke about sculpture being the act of visualizing want you want to create, and then removing any rock from the block that doesn't look like your creation.
Michelangelo's Pieta (1499) is considered one of his finest works, and has a place of honor in St. Peter's Basilica in the Vatican. When I had the privilege of visiting Rome a few years ago, I was relatively ignorant of what all was there, so I was unready for the emotional impact that Michelangelo's masterpiece would generate. The pain and loss represented by Christ's broken body in the arms of his mother brought tears to my eyes. It is one of the most precious works of art I've ever seen.
If you haven't heard of Lazlo Toth, don't feel any sense of loss. He was a mentally unhinged geologist who, in 1972, attacked the Pieta with a rock hammer, breaking off Mary's arm at the elbow. Just thinking of it now fills me with rage, that someone could be so craven as to attack and mar such a thing of beauty. Which brings me to the point of today's blog. You were probably wondering why an entry in a series on the geology of the Colorado Plateau has suddenly swerved off into Paris and Rome.
It has to do with precious works of art, a series of perfect sculptures and creations in limestone that will never be seen by 99.9% of all the visitors to the Grand Canyon and wider plateau country. Hidden from sight, and almost impossible to access, they are the caverns that are present in limestone layers exposed in the Grand Canyon and other parts of the canyon country. There are more than a thousand of them in Grand Canyon National Park, and hundreds more throughout the region. Only a third of them have even been recorded, and of them, only a handful have been mapped and inventoried. More are discovered every year.
Caverns and the decorations that fill them (speleothems) are some of the most beautiful works of nature. To spend time in a wild cave is to experience a sense of exploration and adventure that is seldom felt in any other setting. Unfortunately, the very act of exploring a wild cave is to damage it. No matter how lightly you step, you are breaking and scraping delicate crystalline surfaces, and in narrow passages, no matter how careful you are, it is practically impossible to avoid breaking off fragile formations. Clothing carries molds. Fingers have acids and oils. Shoes carry mud. We alter and damage the beauty of caves even in the act of loving them.
But there is a special place in Dante's Inferno for those who go into caves intent on destroying the beauty and value of this strange and wonderful underground environment. A cave vandal is as low as a Lazlo Toth. A destroyer of beautiful things. And it is unfortunate that there are too many such people in the world. My friends in the National Speleological Association would probably concur with this observation: once a cave is easily accessible and well-known, if it is not protected, it is absolutely doomed. It will be destroyed beyond redemption in months. And so it is that almost no one will ever see some of the greatest treasures on the Colorado Plateau. They have to be locked away and kept secret to preserve them.
In the Grand Canyon and surrounding regions, only a handful of caves are open to visitation. Grand Canyon Caverns near Peach Springs, and Timpanogos Cave National Monument up near Salt Lake City (on the extreme margin of the plateau country near the High Uintas Mountains of Utah). Several others can be explored farther afield, such as at Great Basin National Park in Nevada, and Kartchner Caverns State Park in southern Arizona. Kartchner is especially notable as a tourist destination, because it was discovered recently, and developments inside were made to be as unobtrusive as possible. The sights you see in the cave have literally never been touched by human hands. It is a revelation (you can read about my experience in the cave in one of my first blog posts).
Caves are much, much more than just a pretty place to explore. They are a valuable repository of information for understanding the last few million years of Colorado Plateau history. We will explore this in a coming post...
The bottom photo is of a newly discovered cavern in Grand Canyon-Parashant National Monument that is unusual in that it contains numerous pools of water (most plateau caves are dry). The photographers are Jon Jasper of the Bureau of Land Management, and Kyle Voyles of the National Park Service.
Posted by Garry Hayes at 8:08 PM

Have you ever been to the Legion of Honor in San Francisco? There is a painting there called 'Pieta' by Adolphe-William Bouguereau. It is the most heartbreaking paintings I've ever seen. The look of absolute despair on her face is crushing. If you haven't seen it in person, you should check it out.

Here's a link to a photo of it. I don't know if it will hyperlink to the photo, you may have to copy and paste.