Holy Smokes, Batman, that crap is on fire! 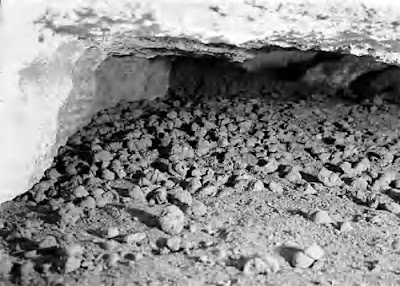 Those boulders littering the floor of the cave? They ain't boulders... 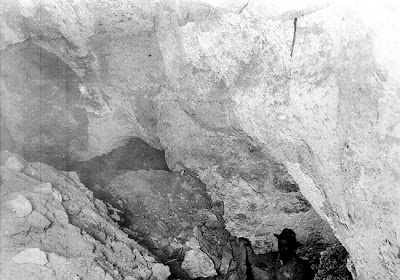 I've heard of the expression being up to your neck in sh$t, but this is ridiculous... 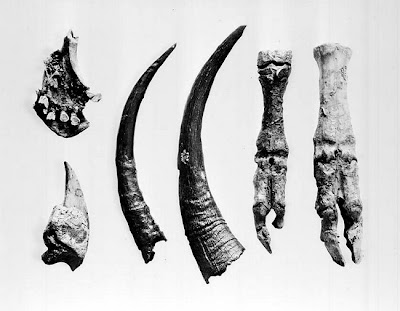 A sampling of the bone material from Rampart Cave 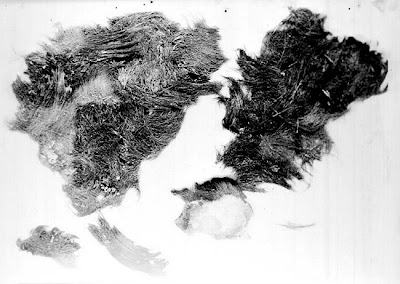 Sloth hair and skin from Rampart Cave.
Despite the frivolous nature of the blog title, there are few words to describe the rage I feel towards cave vandals. And it is one thing to break off things of beauty, like stalactites and other cave decorations, in the sense that centuries and millenia from now they could conceivably grow back long after we are gone. But sometimes, that which is destroyed represents knowledge that becomes lost forever, never to be recovered, not even with the passage of time.
Such is the tragedy at Rampart Cave.
Rampart Cave, like Bat Cave, lies near the western end of the Grand Canyon. The cave was unlike many others in the region, because it was accessible to large animals who took shelter inside. For something like 40,000 years, that's what a particularly strange animal did. And it pooped. A lot.
Nothrotheriops shastensis, the Shasta Ground Sloth (picture in the previous post) would never be mistaken for its diminutive Brazilian cousin, nor for that matter, Sid, the abrasive little sloth in the animated movie "Ice Age". It was 8 or 9 feet long, and weighed a quarter ton (some of its relatives were even bigger, reaching two tons). It lived on these lower slopes of the Grand Canyon, consuming a wide variety of different plants and shrubs. Carbon dating of the deposits of the cave show it was occupied from at least 50,000 years ago up until around 11,000 years ago when all of the sloths of North America went extinct. Studying animal droppings may seem, well, a bit dirty, but think what can be learned from the practice: pollen, seeds, and plant fragments from an animal that seemed to eat just about anything provides a picture of changing environments in the late stages of the last ice age.
Equally valuable and equally disgusting are packrat middens, which were also found in the cave. Packrats are kleptomaniacal rodents who carry all manner of things into their nests, and they pee on them. The urine is highly viscous and the midden becomes a solid mass from the work of thousands of generations of animals.
Other animals either found their way into the cave, or their carcasses were dragged there by predators or scavengers. 14 total mammal species and 5 bird species have been recorded in the cave deposits, including the California Condor, which has just been reintroduced to the region.
Excavations took place in the 1930's and 1940's, and the entrance was gated to protect the resources. Around 1975, persons unknown broke through the gate, and started a fire in the cave. It defied efforts at control, and burned for months. Something like 70% of the precious resource (how strange to think of dung that way) was lost forever to science.
I am appalled that there are people this moronic and stupid. Of course they haven't gone away, either. I am hearing that the disastrous Station Fire that is burning up my childhood hiking destinations in Angeles National Forest was the result of arson, too.

Today's pictures are from the National Park Service archives.
Posted by Garry Hayes at 4:01 PM