Of Rat Pee and Uranium and Scavengers...The Underground Story of the Ice Ages on the Colorado Plateau 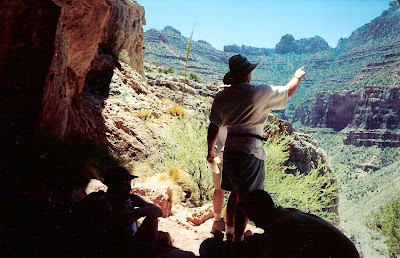 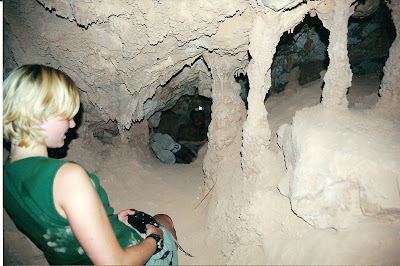 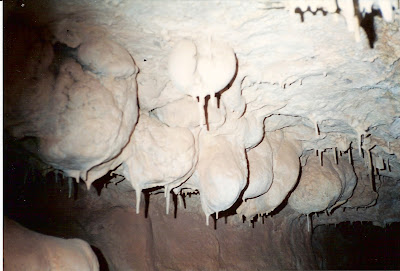 Two essentially unrelated events were happening underground in Grand Canyon National Park in 1976. A precious paleontological resource was burning away in the newly established western part of the park, and in the eastern part of the park, a gawky teenager emerged from a cave with an intense desire to become a geologist.
Caverns are one of the most scenic and most valuable research resources in the Grand Canyon and other parts of the plateau, and one of the least known. Only two caves, Grand Canyon Caverns near Peach Springs, and Timpanogos Cave National Monument offer guided tours. Only one cave within the Grand Canyon, the Cave of the Domes (pictured above), is authorized for entry by inner canyon hikers. It is the one I explored in 1976 as that gawky soon-to-be geology major. The cave is exposed on the brink of a huge cliff on the side of Horseshoe Mesa (look at the drop-off to the right of the people in the top picture). Access was provided many years ago by miners who blasted a trail to the cave entrance, which is great for those who want to see a cavern in the canyon (wasn't there a song like that?), but also made it easier for vandals to reach the cave as well. The outer, easily accessible parts were pretty beat up last time I visited in the late 1990's.
What information can be offered up by the exploration of these caverns?
One of the ongoing mysteries of the Grand Canyon is the precise timing of the final carving of the canyon. The caves form while below the regional water table: the slightly acidic groundwater eats away at the limestone, forming the underground cavities. The familiar speleothems (stalactites, stalagmites and the like) don't form until the water table drops below the level of the cavern (many of these features from from dripping water). The main cause of a massive drop in the groundwater table was the carving of the canyon itself. So...the age of the oldest dripstone speleothems in a cave provides a date for when the carving of the canyon had reached near the level of the cave. Dating is provided by small amounts of uranium trapped in the calcium carbonate formations or isotopes of other radioactive elements. Examples of preliminary results can be found here and here.
Packrat middens, mentioned in the previous post, are another rich (and pungent) source of information about the past. They gather all manner of objects from their environment, and urinate on the pile. The viscous liquid binds the materials and protects them from decay in the dry cave environment. The rats may use the same location for thousands of years, so carbon dating and analysis of pollen and plant fragments allows researchers to reconstruct the biota over a significant period of time. And research shows that since the last ice age ended about 12,000 years ago, the changes were significant.
The Grand Canyon today is dominated by pinyon pine, with ponderosa at the highest elevation. Research conducted with middens has demonstrated that the pinyon and ponderosa are recent arrivals (pinyon, 11,000 years ago, and ponderosa around 7,000-8,000 years), and that during the ice ages, another conifer dominated, the limber pine. Limber pines occur in the west today, but nowhere near the Grand Canyon. These changes of flora indicate not just dryer and warmer conditions, but a change in the pattern of precipitation over the course of the seasons. The summer 'monsoons' have not always been the norm for the region.
Finally, as we saw in the previous post, at times the caves have served as a shelter for animals, or a final repository for their bones after scavengers like condors carried them in. A full listing of some of these wonderful creatures will be the subject of the next post. One other creature sheltered in these caves, but unlike the other animals, left relatively few bones behind. It did however make things, and some of their creations, made of willow twigs, survived in the dry cave environment (their creations of rock could be preserved almost anywhere). About 12,000 years ago, the first humans seem to have entered the Grand Canyon and the Colorado Plateau to take up residence.
Posted by Garry Hayes at 3:50 PM

I really enjoyed this article as the Grand Canyon area is my favorite place on earth and geology is one of my favorite subjects, and I learned some new things about the area I wasn't aware of. Should you ever have the inclination to write an article on this subject, I would like to learn more about the exploration of the newly discovered areas below the existing tourist areas in the Grand Canyon Caverns.

I used to live in Modesto, perhaps I should move back and enroll in your class!

Great post, again. Thanks for putting somethings in perspective for me.