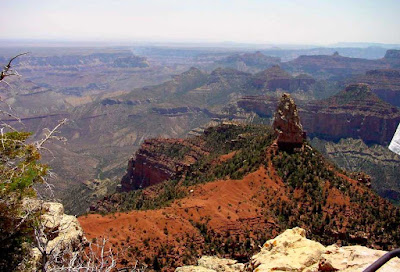 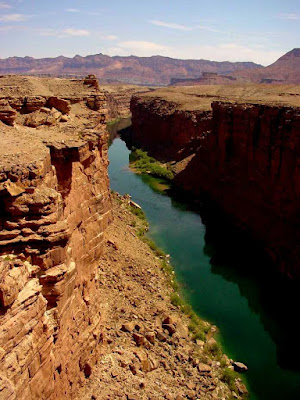 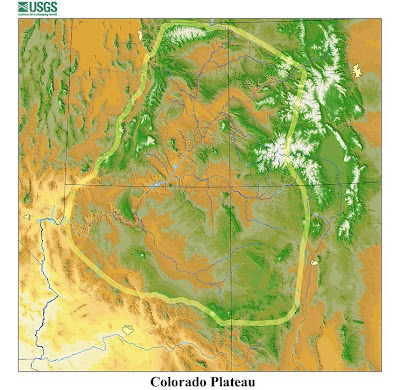 And a river runs through it...*


This is a continuation of my long-running exploration of the geological history of the Colorado Plateau which has been going on now for more than a year. If you've been a glutton for punishment, take heart, for it is almost over. We are closing in on the final 20 million years of a story that has lasted for more than two billion.


One river system totally dominates the Colorado Plateau: the Colorado River. The present incarnation of the river drains portions of seven states and part of Mexico, an area of just short of 250,000 square miles. In an average year (which we haven't had many of recently), it might provide something like 13 million acre-feet of water, which is used many times over for irrigation, power generation and domestic needs (most of the water agreements assumed a far higher average). Little, if any, water ever reaches the Gulf of California anymore.


The river flows 1,450 miles from the Rocky Mountains of Colorado to the Gulf of California. For about 217 of those miles the river flows across the Kaibab Plateau, a place which most people know as the Grand Canyon. The river flows through other beautiful canyons, notably at Glen Canyon and Cataract Canyon, but the Grand Canyon is unique. In places the canyon is more than a mile deep..


So, what made the Grand Canyon?


What made the Colorado River?


The entire river has mysterious twists and turns, and many can be readily interpreted, but the Grand Canyon is a marvelous geological mystery. How did this raging river cross an 8,000 foot high plateau? Some explanations immediately suggest themselves: the river was in place as the plateau rose 50 million years ago, and simply eroded downward as the crust rose. But this doesn't work because the sediments on the west end of the canyon reveal that the river has existed at that site for less than 17 million years. And in any case the Gulf of California is no more than 5 million years old, so the river had to be going someplace else. And that's what makes the mystery so interesting. By virtue of removing the landscape as it cuts downward, the evidence that can tell us the story of the river has been destroyed, except for tantalizing little bits here and there.

If anything has been learned from our explorations of the Colorado Plateau over the last year, it is that the earth's crust has been changing and will continue to change throughout time. Rivers don't just "start", and then begin removing a landscape. Drainages evolve along with the landscapes that they traverse, and what happens along one stretch of the river is not going to be the same as what happens someplace else. Sometimes rivers are disrupted by major events, like huge landslides, earthquakes and lava flows, and stream piracy.

The short answer as to the genesis of the Colorado river is that we don't know all the answers, but we know a lot about it. The river has existed in its present course for no more than about 5 million years, and it carved much of the Grand Canyon in that relatively short period of time. It was aided and abetted by the Pleistocene Ice Ages, which produced glacial melt runoff many times the natural flow of today. Imagine spring flood runoff with sections of the river hundreds of feet under water.


We know that from the end of the Cretaceous to about 20 million years ago, the plateau region was surrounded by highlands, and that most rivers flowed northeast, but may have ended in dry basins or freshwater lakes. The height and timing of the uplift of the plateau during the Cenozoic is one of the controversial aspects of the story (early uplift related to Cretaceous convergence, or relatively recent uplift?). But what is known for sure is that the surrounding regions subsided to form the Basin and Range province and the Rio Grande Rift 15-20 million years ago, leaving the plateau as an elevated land mass.


Rivers and streams began eating away at the edges of the plateau by way of headward erosion, and over the years different stretches of isolated rivers were integrated into the single river system we see today. The precise method by which they were integrated is the focus of current research, and a number of interesting ideas have emerged over the years.


I've written a couple of times about an interesting version of a stream piracy event that was a prominent hypothesis in the 1970's when I was first learning geology in the Grand Canyon region. It suggested that headward erosion of a "Hualapai Drainage" cut entirely across the Kaibab Plateau until it captured the ancestral Colorado, which at the time was flowing southeast towards the Gulf of Mexico. The idea of seeing the moment of stream capture has always appealed to me, so I love the hypothesis, but it has some possibly insurmountable problems.


Another very creative idea made use of the fact that there are numerous cavern systems throughout the older Paleozoic limestones on the plateau. Perhaps the first route of the waters of the Colorado River across the Kaibab Plateau was under the surface, flowing through caves. Eroded and enlarging the cave openings led to the eventual collapse of the ground above, and the formation of a new canyon. Again, there are problems with the scale of this hypothesis, but it had the virtue of explaining some of the inconsistencies of other models.


In the modern era, one hypothesis suggests that the Colorado River may have been forced to the present path across the Kaibab Plateau early on, but that the river drained to the northwest into what is now the Basin and Range Province. By five or six million years ago, stream piracy robbed the old channel of the Colorado, but west of the Kaibab uplift. The avenue to the sea resulted in a rapid cutting of the Grand Canyon soon after.


An alternative modern hypothesis suggests that the integration of the Colorado River system involved the development of huge lake systems which one by one overflowed into adjacent basins, carving deep canyons as they went.


I couldn't begin to argue for one hypothesis or another, but luckily others are doing the discussion in my place, and the Grand Canyon Natural History Association has been kind enough to publish the latest book discussing the origin of the canyon on the internet at
http://www.grandcanyon.org/booksmore/booksmore_epublications.asp. The whole entire book! If you want to learn more about the research that is taking place these days, check it out.


*borrowed from Norman MacLean, referring to a different river, the Blackfoot in Montana. Great book and subsequent movie, including some unexpected geology references concerning J Harlan Bretz and the Spokane Floods.
Posted by Garry Hayes at 10:29 PM