The Cretaceous Parks of the Colorado Plateau: The View is Nice but Access is a Problem... 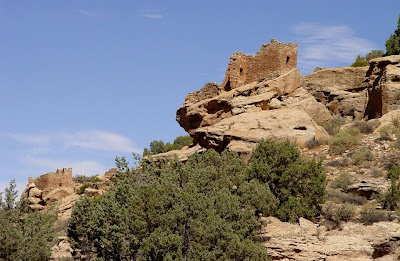 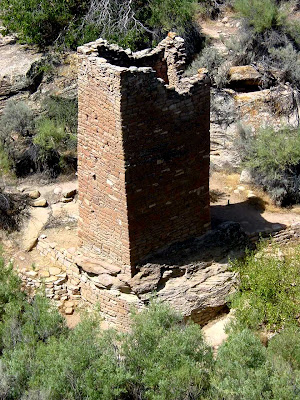 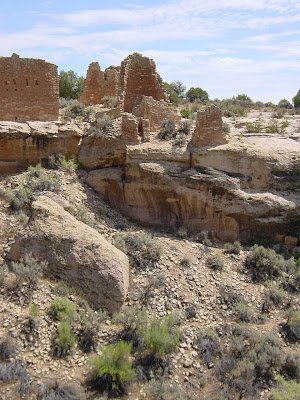 Looking for a good fixer-upper in Utah/Colorado? Have I got a place for you! This is one of a continuing series on the geology of the Colorado Plateau. It's taking a lot longer than I thought it would, and I thank you for your patience if you are still following the story! For several months we have been making our way forward through geologic time via some of the most beautiful places on the planet. For the early Cretaceous, we took a brief foray into Montana for a 1994 dinosaur dig in a layer (the Cloverly Formation) that was a substitute for the very similar Cedar Mountain Formation of the Colorado Plateau.
The remaining Cretaceous layers of the Colorado Plateau reveal events that ultimately separated the North American continent into two parts, with a shallow sea that ran from Canada to Mexico. The fluctuating shoreline left a mixture of sands, silt and mud that accumulated to depths of several thousand feet. When the land was exposed, plants grew in profusion in the tropical conditions. Coastal lagoons and swamps produced a rock that would eventually be a two-edged sword to the inhabitants of the region: coal. The formations include the Dakota Sandstone, the Mancos Shale, and the Mesa Verde Group (which includes a number of- formations that go by several names in different parts of the plateau region).
The story began with the rise of a mountain range in far west California and Nevada…where the Sierra Nevada stands today, a series of volcanoes spewed ash and lava. Deep underground, the magma cooled slowly to form the granitic rocks that make up the mountains we know today in places like Yosemite and Sequoia National Parks. Intense compression of the crust east of the Sierras in Nevada and western Utah caused huge sheets of crust to slide over each other forming a second series of mountains that shed vast amounts of sediment across what is now the plateau country.
The Dakota Sandstone and related formations are found across the region, from Montana to Arizona, and well into the Great Plains. It is usually exposed as a yellowish sandstone with prominent crossbedding. It formed as sea level rose and spread a blanket of beach sands across the region. Dinosaurs wandered across these beaches, but left only footprints and practically nothing else. No one would mistake it for a grand scenery-maker like the Navajo Sandstone, but it is a significant part of two unique national monuments: Hovenweep and Canyons of the Ancients.
Neither park is known for its geology; they were established for the Ancestral Puebloan (Anasazi) ruins that are found there. But geology played an important part in the life of the people who lived there centuries ago. At Hovenweep, the only layers are the Dakota Sandstone and the underlying Morrison Formation. The Dakota forms a resistant caprock that is topped by rich soils. In places, canyons have been carved into the softer rock underneath. The best-known ruins surround the head of Little Ruins Canyon, at the park visitor center and campground complex.
People live with the resources they have in the regions in they inhabit, and one can appreciate the difficulties of life in this harsh environment. But, despite the cold winters and hot summers, the soils were in an ideal location for growing beans and corn; high enough above the desert to get sufficient moisture, but low enough to have a longer growing season. Hovenweep sits in the middle of a “fertile crescent” that extended from Utah’s Cedar Mesa to Mesa Verde in Colorado. Thousands of people once lived here, and the land supported their needs, but droughts or other factors caused them to abandon the region in the 1300’s.
However much we may idealize their existence, one cannot deny the artistry of their architecture. Their structures follow the boulders and are built so well that they have perched there for centuries. So much is not known about their choices; why on the rocks? Defense seems the most logical reason, but defense from whom? And why put a four-story tower inside a canyon, rather than on the rim, where you could use it as a lookout?
Hovenweep is one of those overlooked gems of the National Park System. If you ever visit Mesa Verde National Park or Natural Bridges National Monument, it isn't much farther to get to Hovenweep, and is well worth the effort. Many of the ruins remain unexcavated, and the feel is far more wild than the paved trails of Mesa Verde.
Canyons of the Ancients will be covered in the next post!
Posted by Garry Hayes at 11:55 AM