The Cretaceous Parks of the Colorado Plateau: The Mancos Sea 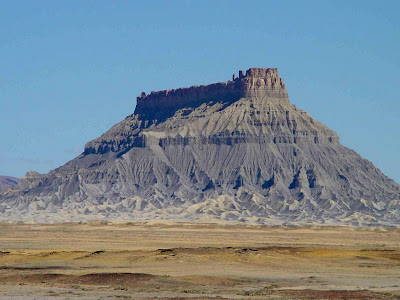 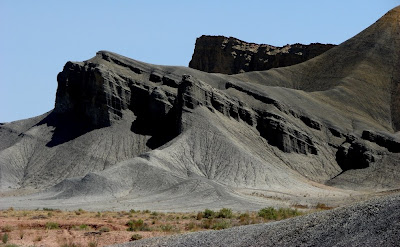 Ah, the Mancos Shale. Woe unto anyone who tries to foolishly drive across it after a rainstorm. Deep disappointment faces fools who try to build a highway or dwelling on the black clay. Frustration to anyone who tries to grow anything on it. And poor health to those who must drink of water that emanates from or passes through it, with its load of poisonous metals. A former colleague who had worked in the region during the uranium boom could only call it the "d----d Mancos Shale".

When the Cretaceous Seaway expanded from the north and south, it inundated the central part of the North American continent, dividing it in two. To the west, high mountains and volcanoes produced vast amounts of mud and silt that drifted into the open water beyond the shoreline sands (represented by the Dakota Sandstone). The organic-rich sediments ultimately accumulated to depths of thousands of feet. Numerous creatures lived in the waters, including the usual snails, clams and oysters, numerous kinds of fish and sharks, but the most interesting fossils include the billions of ammonites (best thought of as octopi with shells; the Pearly Nautilus is a modern relative), and giant mosasaurs, the sea-going varanid lizards (think of a Komodo Dragon with fins).
The clay-rich sediment absorbs water to an extraordinary degree, and swells when wet. It thus gets mucky, and roads cut through it become impassable. Buildings settle and crack on the unstable surface. The clay contains all manner of nasty metals like selenium, arsenic and mercury, which can be absorbed by crops, and contaminate water supplies. And yet, in the right circumstance, the Mancos is a beautiful rock to behold (as Silver Fox can attest).
At Capitol Reef National Park, the Mancos is revealed in cliffs and badlands as an intricate maze of gullies and slopes. In the pictures above, tilted layers of Mancos are found along the eastern boundary region of the park. Factory Butte is one of the premier landmarks in the Bureau of Land Management lands east of the park (and is the site of a controversy over land-use policies and off-road-vehicle use).
Mesa Verde National Park, famous for the Ancestral Pueblo Cliff Dwellings, is also a place where the Mancos is a prominent part of the scenery. More in future posts!
Oh, my former colleague? Many years ago, we convinced him to join us on a field trip that included stops in the Mancos. He was reluctant, but came along. At some point, the students found a nice slope of the clay, and they started climbing and then running down (we aren't necessarily describing mature behaviour, but we've all done it...). We thought it would contribute to Will's healing of his hatred of the Mancos if he actually had some fun on it, so we egged him on, and he climbed the slope and came barreling down at a high rate of speed. He lost his footing, and tumbled down, cutting up his leg.
Oh well....
Posted by Garry Hayes at 10:28 AM

Living in a town built on a Mancos Shale valley, all I can say is...


...it would be vastly improved by 500 degrees C and about 5 kilobars. Mmmmm. Pretty schists.

The Mancos has lots of secrets yet to tell ... I, for one, am glad it is not cooked!

There is also this from the correlative Tropic Shale:

THERIZINOSAUR – Mystery of the Sickle-Claw Dinosaur