The Cretaceous Parks of the Colorado Plateau: The Tragedy at Castle Rock Pueblo 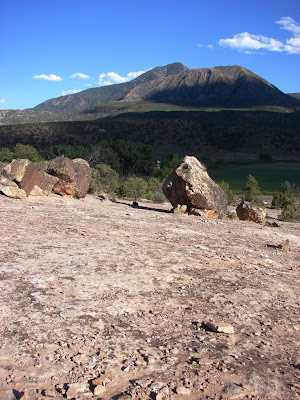 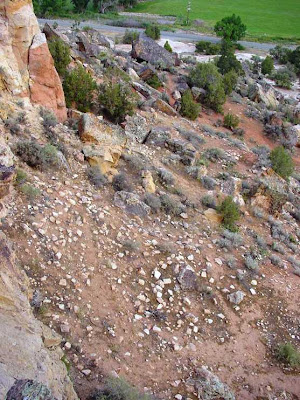 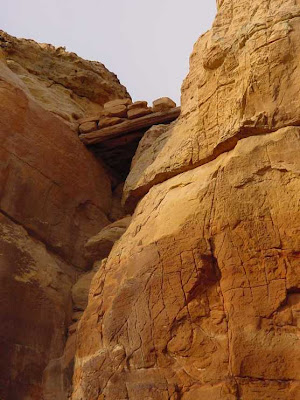 Some places truly are haunted...
Located next to a paved highway and agricultural fields, it lies hidden in plain sight, protected by a thick growth of cacti, and buried in the debris of the fallen buildings. 700 years ago, a frightened people constructed the village on a barren stretch of slickrock along McElmo Creek in southwest Colorado. It contained at least 16 kivas, 40 surface rooms, and nine towers and probably housed 75-150 people. They occupied the site for no more than 30 years, and the ending was horrific.
This post is part of a series on the geology of the Colorado Plateau. Although much of my narrative has involved the story in the rocks and events of millions or billions of years ago, there are times when the rocks become part of the human story, and such is the case here. Canyons of the Ancients National Monument was established to preserve some 6,000 archaeological sites in southwest Colorado, but geology was instrumental in the development of human societies in the area. The caprock in the area, the Dakota Sandstone, is topped by rich soils that were capable of supporting a rich agricultural base consisting of beans, squash, and corn. At least until drought and environmental degradation caused the crops to fail. And then chaos seems to have taken over the people of the region.
The Castle Rock Pueblo is certainly not a striking visual presence. Your eyes are actually drawn to the natural rock tower and the barren slickrock flats on which the village was constructed. The realization comes slowly that the small stones piled along the margins are not geologically "right", being nearly all of similar size, with none of the characteristic shapes of talus slopes (keep in mind that I am speaking of the eyes of a geologist; I have no doubt a trained archaeologist would see the human origin of the rockpile in a millisecond). Coming closer, one begins to see platforms and walls hidden in the fractures of the sandstone cliff. Finally at the base of the cliff, on hands and knees, one sees the fragments of pottery that show that people once lived here.
The site was excavated in 1990-94 by the researchers at the Crow Canyon Archaeological Center, and a detailed report has been posted on the web (here). The site was of interest because it had a chance to shed light on the depopulation of the region in the 1280's, given the brief period it was inhabited. Couched in the spare language of the scientific researcher, a sad tale emerges: at least 41 people died a violent death at the time that the village was abandoned. It was not the first time the population was attacked: many of the victims had healed from earlier injuries.
So many stories of human triumph and tragedy have been lost to history, but the horrible end for the inhabitants of the Castle Rock Pueblo was not forgotten. Their story was told by the survivors and has been passed on through the generations to the present day, so that it is one of the very few such ruins with a known oral tradition. The story is one of a siege by foreign invaders, of defending the town for weeks while children and families were evacuated to the south.
Addendum: If you are paying close attention, you may noted that the Castle Rock site is actually built on Navajo Sandstone and Entrada Sandstone. It lies in a deeply cut canyon below the Sand Canyon site of the previous posts and thus is in older rock.
Posted by Garry Hayes at 11:22 PM