The Cretaceous Parks of the Colorado Plateau: Walled Cities and Tragedy 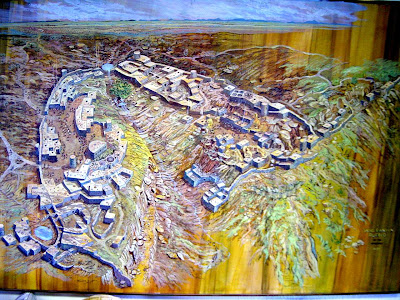 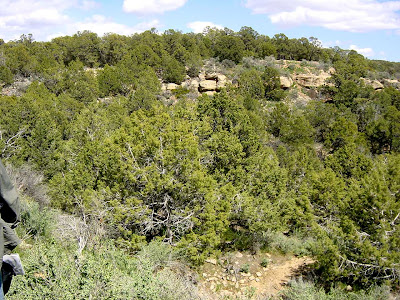 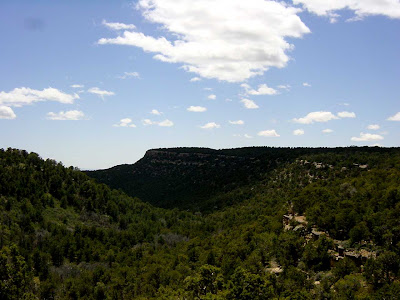 A walled city of 400-500 people, surrounded by tilled fields, and constantly subject to attack during its short existence in the 13th century. A castle complex in England or France? No, it is one of the more intriguing sites on the Colorado Plateau that is almost unknown to the millions of tourists who pass through the region every year.
We have been working our way through the geological history of the Colorado Plateau, and in our most recent posts we have been reviewing the late Cretaceous sediments that formed along the margins of an inland sea that divided the North American continent into two. The Dakota Sandstone originated in the beaches of that sea, and forms an important capstone across the "fertile crescent" of southern Colorado and Utah. It is covered by the rich Dove Creek Soils that provided the Ancestral Pueblo people with corn, squash and beans (beans are still grown across the region today).
About 165,000 acres in the region are preserved as Canyons of the Ancients National Monument, which has to be one of the unique parks in the American West. Where most parks include campgrounds, carefully labeled overlooks and exhibits, various visitor services and efforts to attract tourists, Canyons of the Ancients has none of these things. If anything, the administrators of the park would just as soon discourage visitation. Why? Because the park was established to preserve one of the densest concentrations of archaeological resources in the country, and they have almost no resources with which to do the job. The park lacks the spectacular cliff dwellings that are so characteristic of Mesa Verde National Park, and most of the ruins lie beneath hills and mounds of rubble. And yet it is a treasure...
I have had only a few opportunities to explore the mysteries of Canyons of the Ancients, but I learned more in those few trips about life in the Southwest than pretty much all of my previous journeys in the region. With little prior background, I participated in a geo-archaeological field trip to the head of Sand Canyon in 2003. We first paid a visit to the Crow Canyon Archaeological Center, which has conducted many of the surveys of the ruins in the monument. Along with the Anasazi Heritage Center, it serves as source of information on the park.
We drove across the beanfields, and I quickly became aware that ancient villages were scattered everywhere across the mesa surface, including right in the middle of some of the modern pastures as sage-covered mounds that the farmer's plows avoided. When we reached the end of the road, we got out of our vehicles, and wandered through the pinon forest to the upper rim of Sand Canyon. It was a little tricky finding a pathway through the boulders and rocks that lay scattered across the surface. Still kind of ignorant, I had not stopped to think how boulders and rocks did not fit with the topography, which was composed primarily of fine-grained soils. It was at that moment that our trip leader pointed out that we had reached the center plaza of a huge Ancestral Pueblo village that once housed 400-500 people. Looking around, I realized that every single boulder and rock around me was once part of a wall or a kiva. Look at the two photos above. Hidden beneath a pinon forest, little evidence can be seen indicating the presence of a village.
It was an amazing complex. An eight-to-ten foot high masonry wall surrounded the entire city. Water for the hundreds of people was provided by a single spring that was fed by the groundwater from an area of only a few acres. The village contained some 420 rooms, 95 ceremonial kivas and 14 towers. And yet it was built and then abandoned within a period of only 30 or 50 years in the late 1200's. Things did not go well at the end; environmental degradation and drought had caused stressful conditions, and evidence found at the site suggested the population was an aggregation of several scattered smaller villages in the region, come together for defensive purposes. Researchers also found evidence that an attack may have brought an end to the existence of the village itself, with burning of buildings and unburied bodies, victims of a violent death.
I don't know that I ever could have had the patience to do the actual excavation work, but the science of archaeology has always fascinated me. In so many ways the methods and technology of archaeology parallel those used in historical geology and paleontology, but there is an emotional component to archaeology that doesn't exist in fossil work. We are working with the remains of our immediate ancestors. They lived lives different from ours, and yet there are enough clues to understand something of their beliefs and hopes and fears.
We drove back to our dorm at Fort Lewis College in Durango. It was an enlightening trip.
In the next post, a discussion of another site at Canyons of the Ancients, the Castle Rock Complex.
Posted by Garry Hayes at 8:54 PM

I don't recall this one, although I think I've been to Cortez, and have been to at least part of Mesaverde. I'll have to add it to a list of places to go!

Sounds like a great trip. As an employee of Crow Canyon, it sounds like you did the day tour here. We also offer week-long programs where participants can dig alongside archaeologists at a site near Sand Canyon.