The Cretaceous Parks of the Colorado Plateau: The Green Table 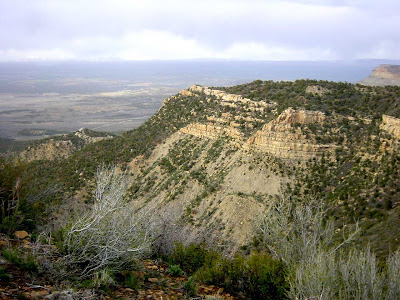 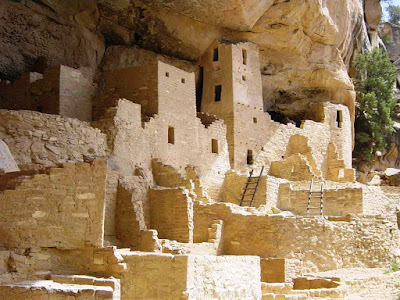 The Mancos Shale of the previous post is also an important component of the geology at one of the nation's premier national parks, Mesa Verde (tr: "green table"). The park is tucked away in the far southwest corner of Colorado adjacent to the Ute Reservation and the towns of Cortez and Mancos (from which the shale takes its name). The high mesa (8,000 feet +) slopes south towards the desert region of Four Corners and the Navajo Reservation, and is dissected by a series of deep canyons which also drain towards the desert.
The mesa lies at the east end of the "fertile crescent" mentioned previously here and here, where conditions were ideal for growing squash, beans and corn. At Hovenweep and Canyons of the Ancients, the soils formed on the surface of the Dakota Sandstone. At Mesa Verde, the Mancos covers the Dakota, and is in turn covered by three formations that represent the receding shorelines and river floodplains that lined the Western Cretaceous Seaway, the Cliff House Sandstone, the Menefee Formation, and the Point Lookout Sandstone. The formations are found elsewhere, with different names, but the three together are usually referred to as the Mesa Verde Group. The sandstones are resistant to erosion and form prominent cliffs wherever canyons have been carved. Water moves freely through the sands until it reaches a clay rich layer (like the Mancos) and then moves sideways until it can drain into the canyons as springs. The cement holding the sands together is easily dissolved at such sites, and as the sand washes away, prominent alcoves have developed (the National Park Service has a nice review of the geology here).
Although the region is steeped in beautiful scenery, Mesa Verde was established as a national park in 1906 for the purpose of protected the spectacular cliff dwellings of the Ancestral Pueblo people. The mesa, as mentioned before, was a good site for agriculture. It was sort of a compromise; low enough to have a long growing season, but high enough to receive sufficent moisture in most years.
Nomadic peoples had moved through the area over thousands of years hunting and foraging, but the region was not settled in a permanent way until about 550AD (see here for a nice NPS review of the archaeology). It is not usually recognized, but for 500 years the Puebloan people did not live in cliff dwellings at all. They first lived in pit houses on the mesa surface, and later built small villages, also on the mesa surface. Looking at the semiarid forest of pinon and juniper that covers the surface of the plateau today, it is hard to believe that at one time, most of the park area was under cultivation. The farmers built reservoirs and check dams to prevent soil erosion, and most of the land was being used to support the population. The cliff dwellings for which the park is most famous were generally built during the final century of habitation, from around 1190 to 1270 AD. The dwellings certainly look defensive in nature, and when they were abandoned, so was the entire region. The reasons are not clearly known, but drought, resource depletion, warfare, or disease may have played a part. The survivors moved south and west to Arizona (the Hopi) and New Mexico (the Pueblo people) where they live today.
Something like 4,700 archaeological sites have been identified in the park, of which 600 are the popular cliff dwellings. Many sites were exposed in the last decade or so when something like two-thirds of the park burned in a series of intense fires. Although the fires severely damaged many sites, others were found for the first time. Many of the sites were severely vandalized by pot-hunters before the park was established, and the park service is vigilant about protecting what remains. Most of the dwellings and village sites are closed to visitation, but numerous pullouts on park roads allow visitors to look down into the alcoves. A number of the mesa-top sites can be accessed from the park roads. Spruce Tree, Cliff Palace, Long House and Balcony House are four of the larger alcove villages that can be toured (reservations required for the last three). Speaking from personal experience, Balcony House is one of the best tours, as you get a real sense of the inaccessibility of the villages: you must climb several tall ladders to get into the alcove, and must crawl through a few passageways to see the entire village.
If you visit the area with a geology crew, the park has a nice campground which is rarely crowded, with showers and a grocery store nearby. Motels and supplies are available in Cortez, Mancos or Durango. Oh, and try the Navajo Tacos at the Farview Lodge!
Posted by Garry Hayes at 4:36 PM