The Way it Was Today: Yosemite Valley in November 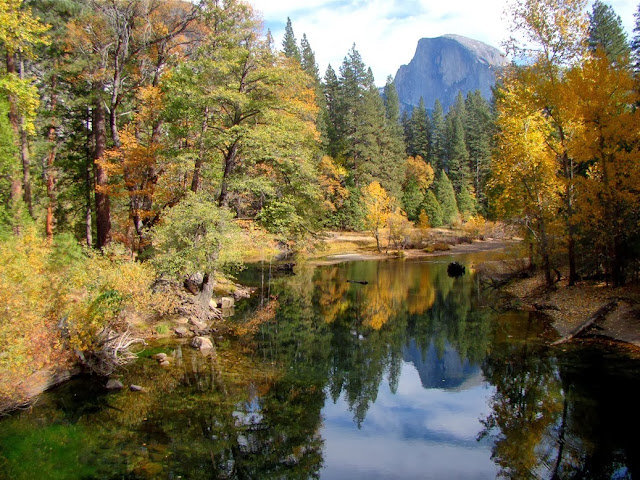 What a wonderful week! I had the privilege of visiting the most beautiful place in the world twice in the space of a few days. It's true I was taking a bunch of students with me, but we were learning geology in one of the most spectacular settings possible and it was a fine and enthusiastic group. For some it was their first visit to the valley. For others it was the first time seeing the place in a geological sense. 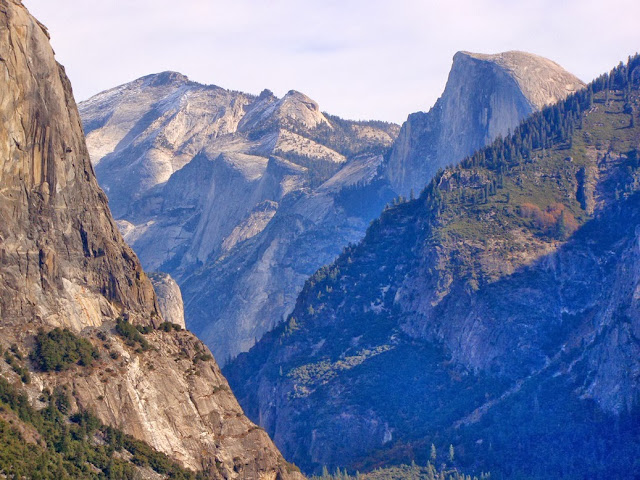 It was an eventful week as well. A storm blew through, leaving a few inches of snow in the valley, but it was all but gone by the time we arrived this morning. Last week there were lots of leaves on the trees in full glory of color, but things were dusty. Today the ground and air were moist, the forest smelled sweet, but there were fewer leaves on the trees.

Our first stop was to visit the Tunnel View, a spot just a few hundred feet below where the valley was first discovered by Europeans in 1851. There was trouble between American settlers and the local Native Americans, so a militia had been raised to search them out. Their medical officer Lafayette Bunnell was entranced with the valley and wrote a glowing account of its beauty.

I seemed to be concentrating on Half Dome a lot today. We had arrived in a large bus, and buses aren't allowed to park in many parts of the valley, so we toured on the free trams with appointments to meet at several locations. I elected to walk between points, and had a few new angles with which to view the iconic chunk of granitic rock (granodiorite, to be specific).

Despite the appearance, the dome is not really in half. It might be more properly called Three-Quarter Dome, although I prefer the Native American name of Tis-sa-ack. The south east flank is a classic exfoliation dome, shaped by the slabbing off of the corners and edges in response to the release of pressure as the rock was exposed by erosion. The steep northwest face is a joint surface that was exploited by glaciers that flowed beneath the face of the dome. 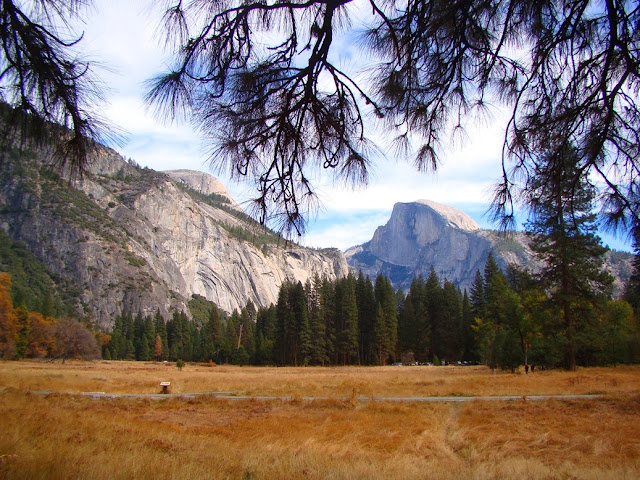 There are other lesser known domes, such as North Dome, seen below. It is the rounded edge of a long ridge of granitic rock. Like Half Dome, it was formed by exfoliation. Glacial ice never covered it. North Dome lies above Tenaya Creek, across from the face of Half Dome. 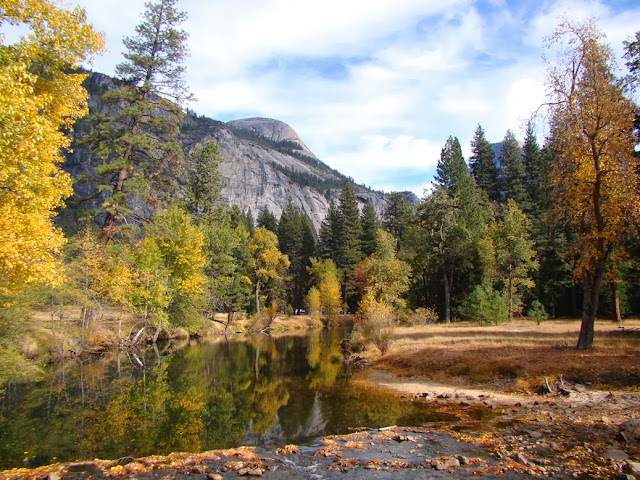 I was walking from Yosemite Lodge to Happy Isles. I started by wandering through the forest in an unfamiliar direction and almost immediately discovered the central receiving facility for all the raw sewage in the valley (I don't know this for sure, as the building was locked and unlabeled, but the stench was convincing). I reconsidered my route and headed out to the meadow near Sentinel Bridge. I was rewarded with a beautiful panorama of the Cathedral Rocks and the Three Brothers (below). 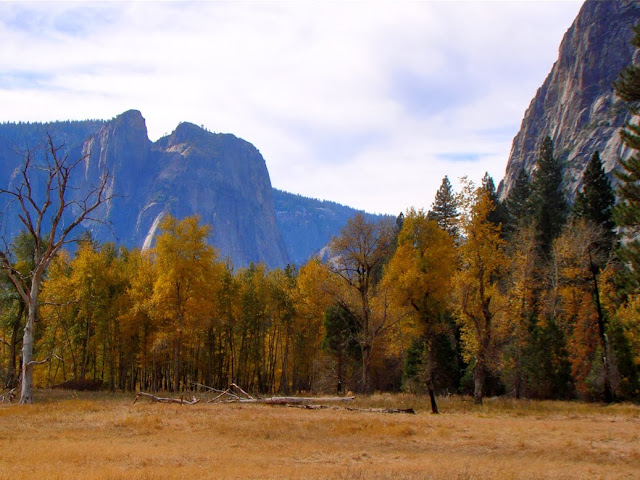 I said there were fewer leaves, but they certainly weren't gone by any means. Fewer leaves means that the remaining ones stood out in bolder relief. 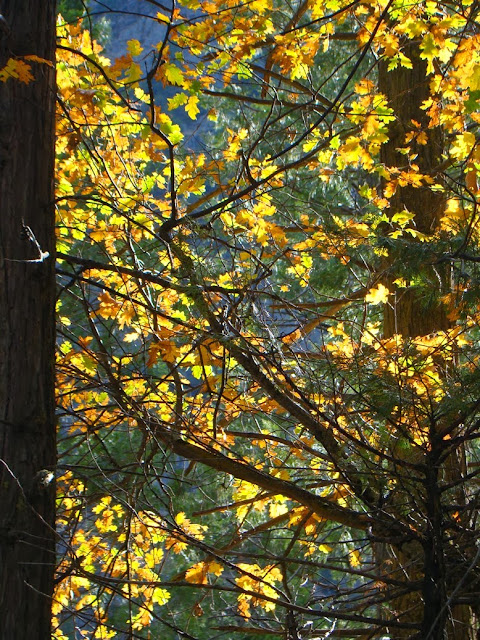 The Merced River continues its late season serenity. Low flows provide marvelous reflective properties. The picture below is from a stretch of the river just downstream of the tent cabins at Curry Village. 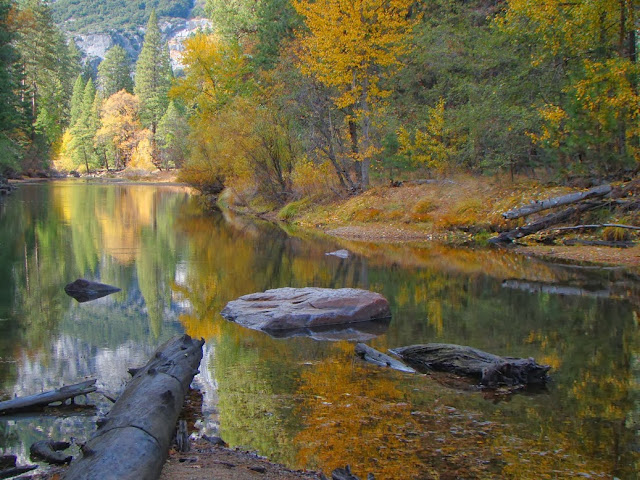 The ravens were out in force. I stopped for a snack and they were flanking me. When I got up to discard my trash, they were thinking about seeing what was left in my pack. I found myself imagining that they will be the next truly intelligent being to evolve after we humans are gone. Like us, they seem capable of surviving practically anywhere (the deserts of Death Valley to the high peaks of the Sierra Nevada and across the desert southwest), and they are probably already smarter than the average touron in Yosemite (it's how they stay fed). 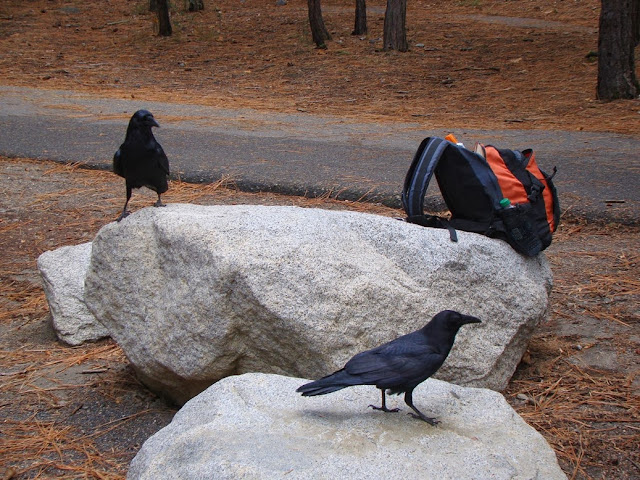 After meeting with the students at Happy Isles, we started back across the valley to Yosemite Lodge. I decided to walk and see if I could beat the tram. I did, by about 10 seconds (Unlike the tram, I didn't have to stop, and I could take the shortest route along roads and trails). I snapped a few shots while rushing along the road. Below is another view of North Dome, and a side of the Royal Arches, a form of exfoliation in reverse. 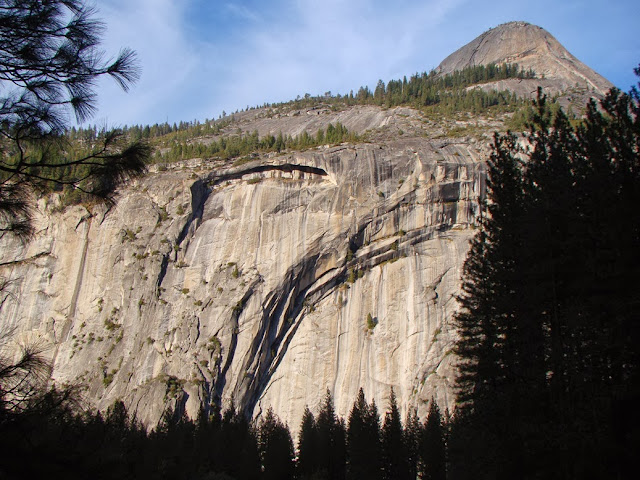 Washington Column is a steep cliff that overlooks the Mirror Lake area. The largest slide known from Yosemite Valley occurred here a few thousand years ago, forming the lake (that is a lake only seasonally). It may have been about twenty times larger than the biggest historical mass wasting event, the Middle Brother slide of 1987, which involved 600,000 cubic yards of granitic rock. 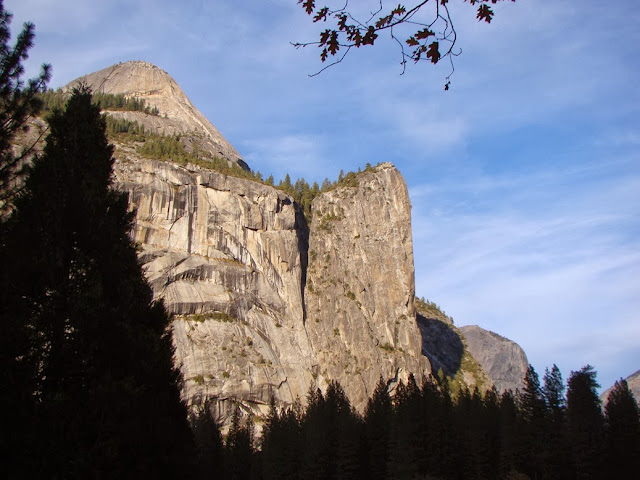 As I got closer to our final stop, I had one more wonderful view of Half Dome. The late afternoon sun was casting dappled shadows across the meadow. It was another beautiful day in a wonderful place. In a few more short weeks it will be winter! 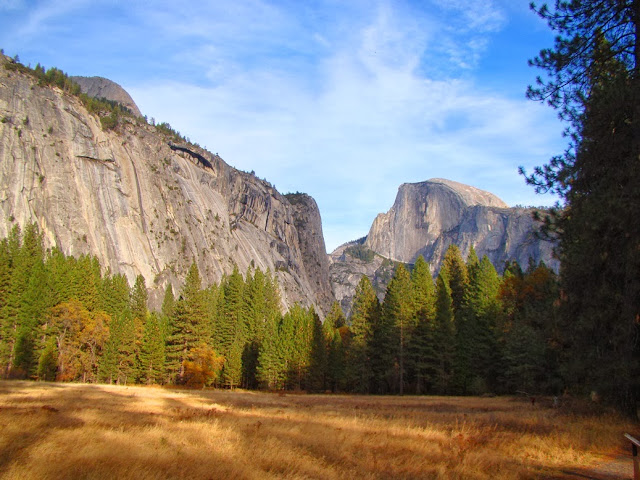 You, and your students, are so fortunate to have such beauty, and geology, in your back yard. Always happy to join along.

"The Eocene Heart Mountain detachment (HMD; Wyoming, United States) is one of the most controversial and enigmatic geological features representing the largest and best-preserved volcanic landslide structure on Earth (Malone, 1995). Allochthonous, upright, mountain-sized blocks of Paleozoic carbonate and Eocene volcanic rocks are dispersed over an area of 3400 km^2, with a displacement of as much as 110 km on a surface that dips less than 2° (Beutner and Gerbi, 2005; Malone and Craddock, 2008; Craddock et al., 2009). Over the past 20 yr, most researchers accept that emplacement of allochthonous rocks was initiated by the catastrophic collapse of a stratovolcano ~50 m.y. ago, and that the entire event took place over a period of a few minutes to hours (Malone, 1995; Beutner and Gerbi, 2005; Aharanov and Anders, 2006; Anders et al., 2010; Craddock et al., 2009). Thus, the HMD emplacement event is considered to be a much larger analog of the famous A.D. 1980 catastrophic landslide-eruption of Mount St. Helens (Washington State)."