Where the Sierrra Nevada Rises From the Sea: A Quick Explore of the Monterey Peninsula 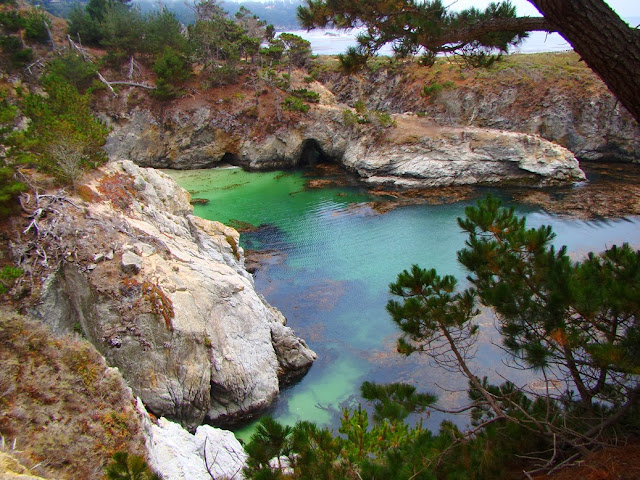 We've been exploring the most beautiful coastline in the world, and in the last post we were looking at a spectacular conglomerate, the Carmelo Formation, which formed in submarine canyons off the coast of California. The rocks exposed in the cliffs formed in the Sierra Nevada magmatic arc, but were sliced off and moved north along the San Andreas fault some 200 miles or more. Today we finish at Point Lobos and briefly explore part of the Monterey Peninsula. 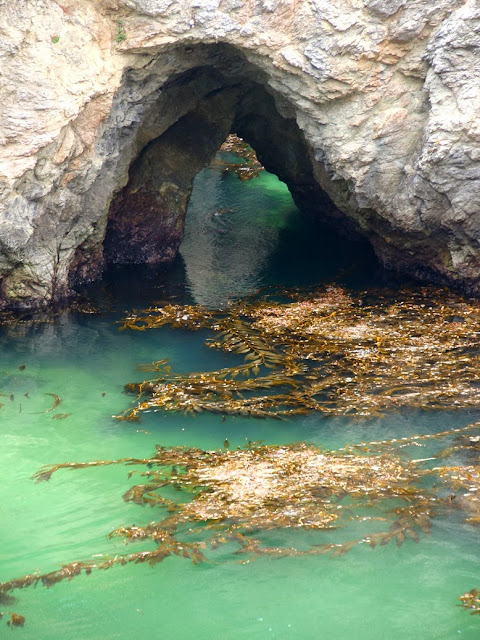 The south end of Point Lobos includes China Cove and a beautiful sea arch with jade colored water. Jointing in the granitic rock allows the waves to exploit weaknesses to form coves, and arches can form along narrow headlands. Once formed the arches will increase in size until they collapse, isolating the headland as a sea stack or small island. It takes only a few feet of deep water to protect an island from terrestrial predators, so birds will nest there. In July the Brandt's Cormorants formed large groups that made me imagine penguins near Antarctica. The white bird droppings complete the illusion, resembling snow! 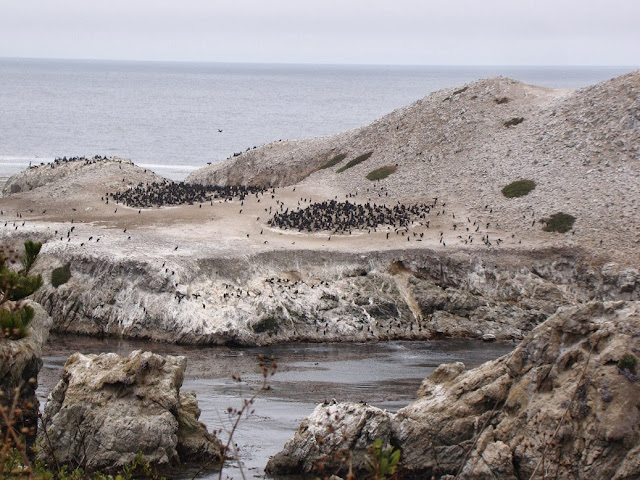 As we headed north along the highway, we encountered Seventeen Mile Road on the Monterey Peninsula. It is a toll road, passing through lots of private neighborhoods, but the appeal of the road is undeniable, so I will grant them a bit of free publicity. Where the cliffs at Point Lobos tended to be broken up by the stresses of nearby fault zones, the rocks on the peninsula are more solid, and wave erosion accents the joint patterns in the granitic rock. 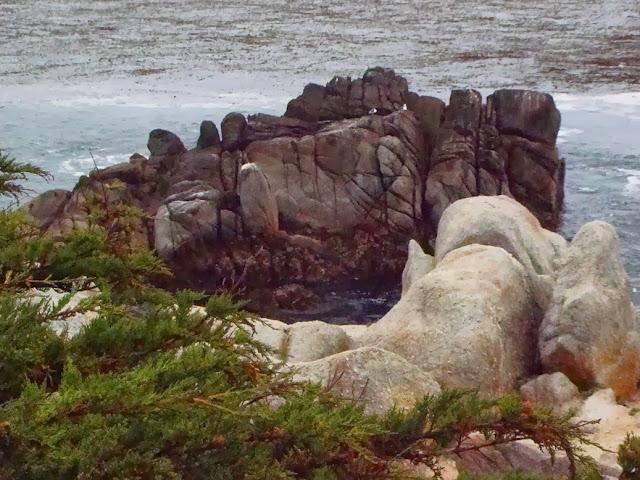 Two unique species of tree grow on the Monterey Peninsula, the Monterey Cypress, and the Monterey Pine. Both of them have a very limited native range, the Pine in five groves along the coast, and the cypress in only two, at Point Lobos and Cypress Point on Seventeen Mile Drive. Although I refused to take a picture of it, a huge cypress on a headland along the drive is one of the most famous trees in the world. The poor tree has had all manner of wires and cables attached to keep the tree standing, and cement walls protect the base. I just sort of feel like the poor thing is abused, kept alive by extraordinary measures instead of letting nature do her thing. 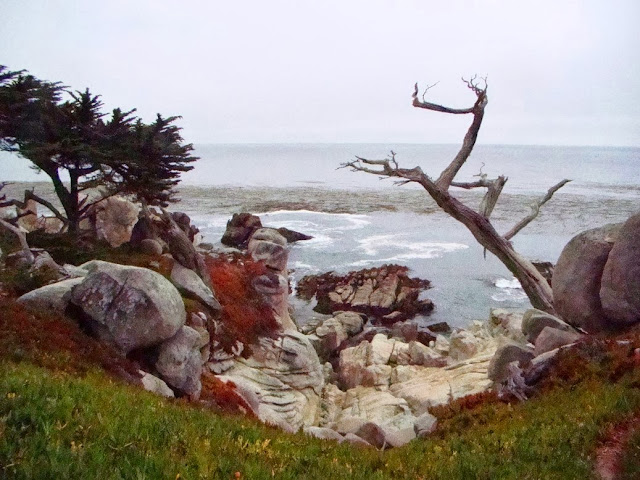 The cypress trees, both alive and dead, make a marvelous counterpoint to the white granitic boulders along the coastline. 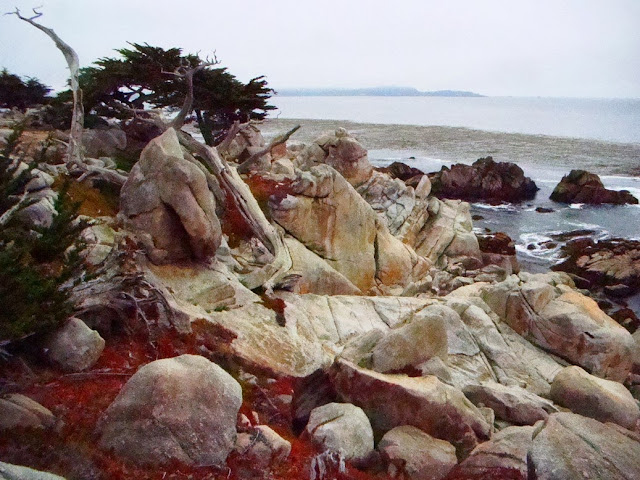 The Monterey Pine is the most widely planted commercial pine in the world. Some 10 million acres across the globe, especially in Australia and New Zealand, have been planted and are producing lumber. Most people would be surprised to learn just how limited the original forest is, just two islands off of Baja Mexico, at Cambria and Ano Nuevo on the California Coast, and on the Monterey Peninsula. 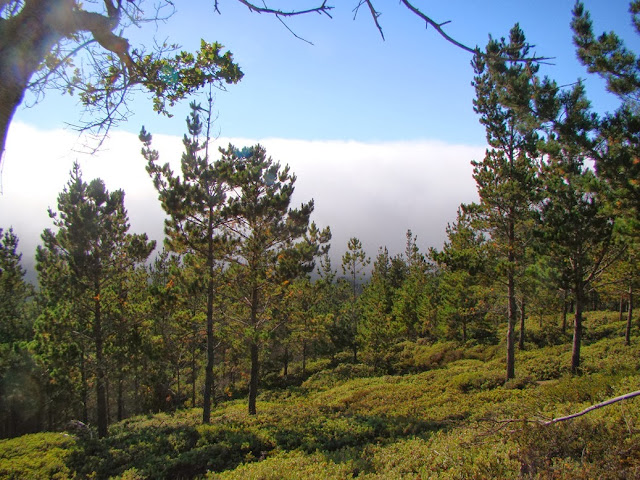 A large swath of forest has actually been preserved as a more or less wilderness grove, quite a surprise given the private landholdings. Developments still threaten the forest, but even worse is a fungus (pine pitch canker) that is killing large numbers of trees. It would be tragic to lose the trees, as the natural stands possesses far more genetic diversity than the plantings around the world. 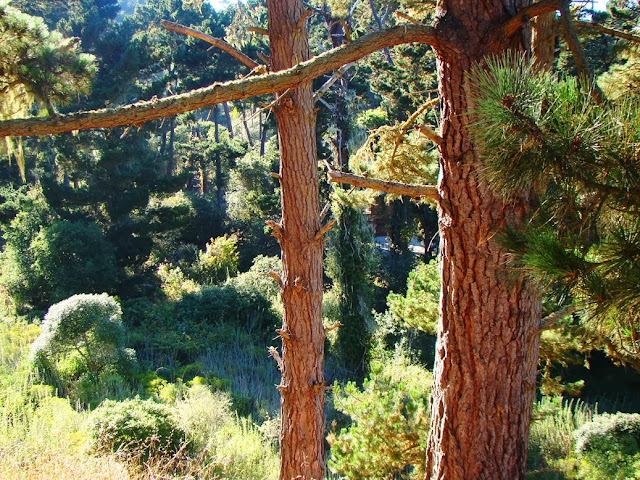 The toll road climbs to a high point that offers views of the coast north of Monterey (when there is no fog). It was a pleasant drive through this uniquely Californian forest.

There is a fine description of the evolution of the Monterey Pine at http://evolution.berkeley.edu/evolibrary/article/montereypines_01, and an article on the Monterey Cypress at: http://www.pointlobos.org/nature/plant-communities/monterey-cypress-evolution. It makes interesting reading! 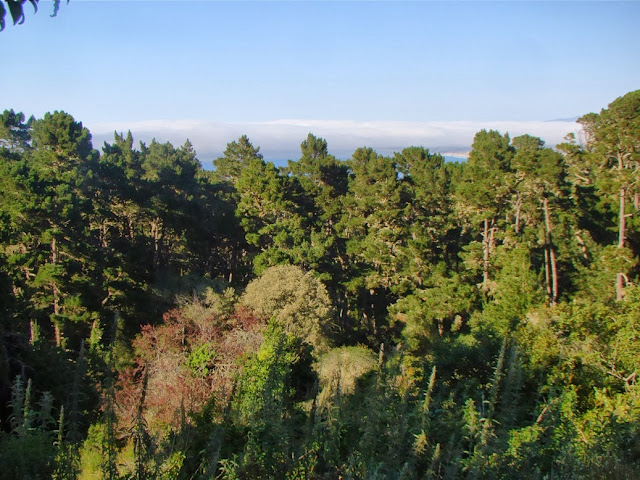 Up next: we jump across the Golden Gate!
Posted by Garry Hayes at 11:49 PM