Where the Sierra Nevada Rises From the Sea: Sea Wolves and Underwater Yosemites 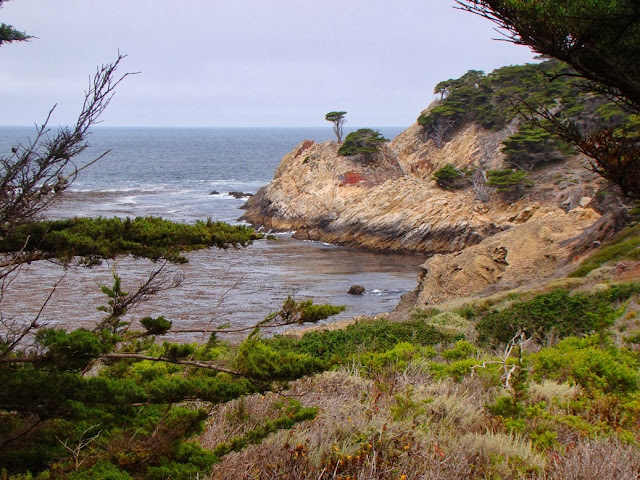 Punta de los Lobos Marinos (Point of the Sea Wolves) is the source of the name of Point Lobos State Reserve, the next section of shoreline in our exploration of the most beautiful coastline in the world, the region between Big Sur and Bodega Bay in Central California. Point Lobos is one of the most popular of California's state parks, and so its inclusion in my little mini-series should be no surprise. Landscape artist Francis McComas once said that Point Lobos is "The greatest meeting of land and water in the world." I don't know that I completely agree, but that's only because of the nearby competition that I've already talked about in previous posts.

The sea wolves aren't land carnivores. The name instead signifies the elephant seals and harbor seals that frequent this section of coast. There have always been a few around when I've stopped in the area for a visit. And how ferocious they look!

There is a connection of sorts between seals (the Pinnipeds) and other large carnivores like the bears, canines, and felines. They shared somewhat of a common ancestry around 50 million years ago in a world much changed by the disappearance of the dinosaurs several million years earlier. Without major reptilian competition (although birds gave us mammals a run for our money), the mammals diverged quickly into several distinctive clans. Of today's carnivores they are most closely related to the bears or the Musteloids (otters, weasels, and skunks). 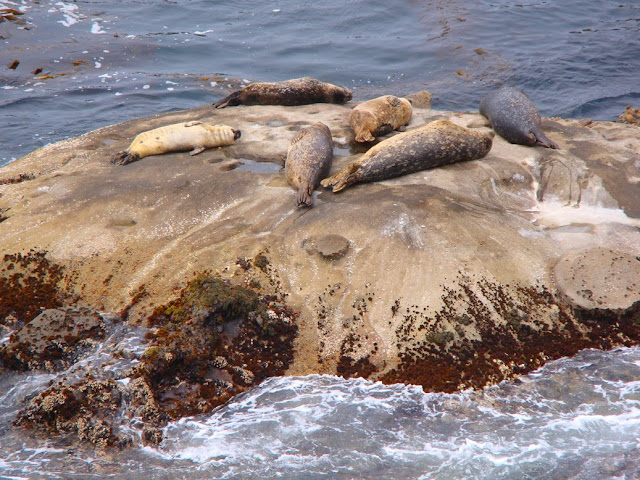 The title of the series invoking the Sierra Nevada grows from the realization that the rocks exposed along the coast in this region originated as granites of the Sierra Nevada Batholith. Subsequent shifts on the San Andreas fault system have carried these rocks, the Salinian Block, a minimum of 200 miles to the northwest, and possibly much more. In this sense, the Sierras do rise from the sea in the form of the Santa Lucia Mountains.

One of the wonderful features of the California Coast is how diverse the geology is. We've already seen in this series coastlines carved from volcanic rocks, metamorphic rocks, and granitic rocks. At Point Lobos there is something new and different: a colorful sedimentary conglomerate. The origin of the conglomerate allows us to draw one more comparison to the Sierra Nevada, although I admit the connection is tenuous one. Yosemite Valley is a deep 3,000 foot deep canyon with steep cliffs carved out of granite. Valleys carved in granite to depths of 5,000 feet with steep sides have also existed off the California Coast, and still exist today. They are not carved by glaciers, but by underwater landslides called turbidity currents. 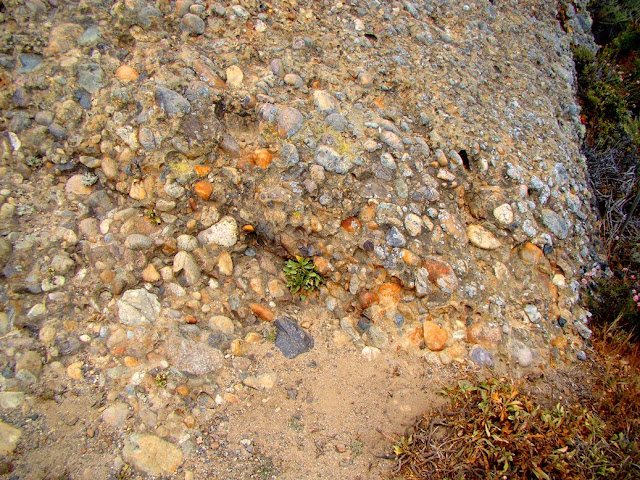 Turbidity currents are masses of cobbles, pebbles, sand, and silt that break loose from the edge of deltas or continental shelves and flow as turbulent masses into much deeper water. Some turbidity currents travel at speeds of upwards of 50 miles an hour and as such have tremendous erosional ability. The Monterey Submarine Canyon offshore of California is as deep as the Grand Canyon, and is around 95 miles long. 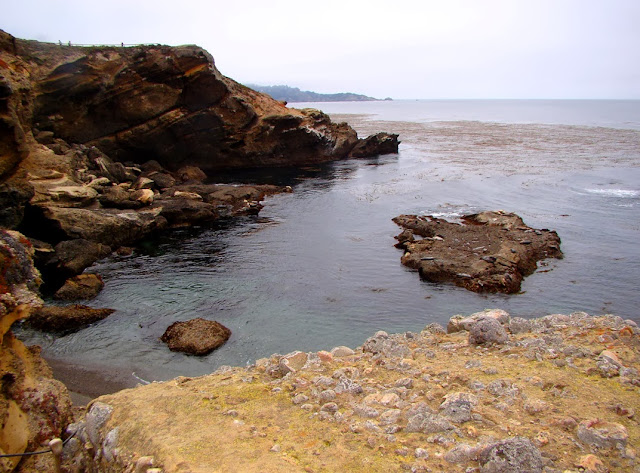 55 million years ago, the Salinian Block was hundreds of miles to the south, and a submarine canyon was eroding at that time. The canyon filled in places with conglomerate and sandstone to become the Carmelo Formation which is found in exposures all around Point Lobos. 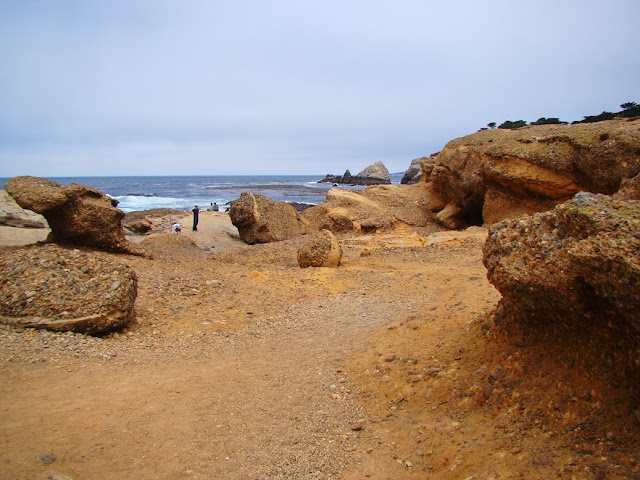 The pebbles include fragments of volcanic rock that  eroded from large volcanoes that once existed on the surface far above the deep masses of magma that made up the Sierra Nevada granites. I've never been much of a sedimentary petrologist, but I thought the conglomerates at Point Lobos were among the prettiest I've ever seen. 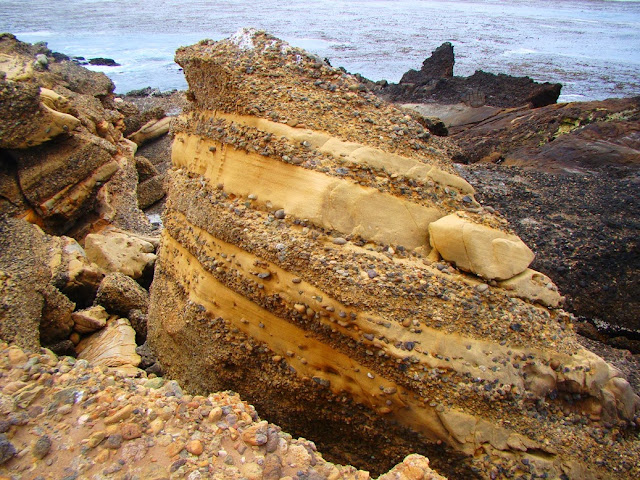 The sandstone exposures display interesting weathering patterns, like the cavernous weathering seen in the outcrop below. 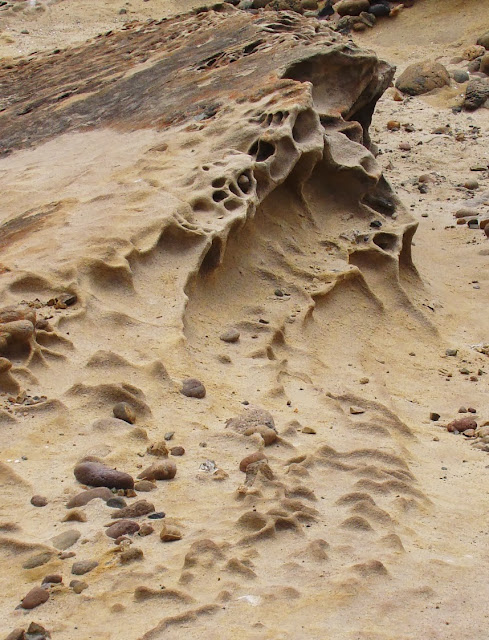 And finally, a little biology. Not because I know what I was looking at, but because they seemed pretty. 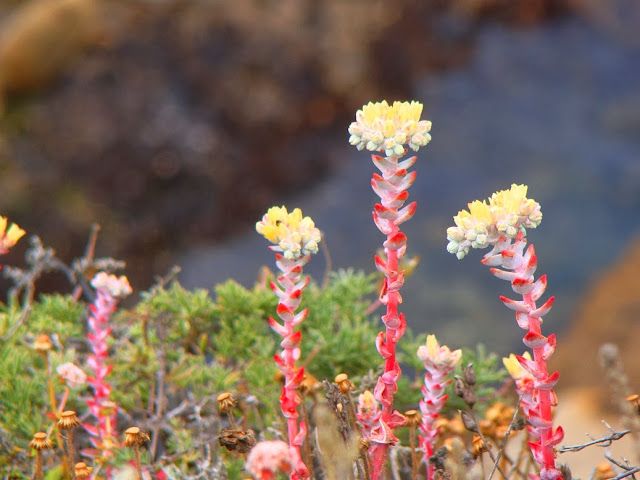 There will be a bit more on Point Lobos in a coming post. If you want to visit, it is on Highway 1 a short distance south of Carmel Highlands. If you go, make sure to get an early start because the park is popular and the parking limited. 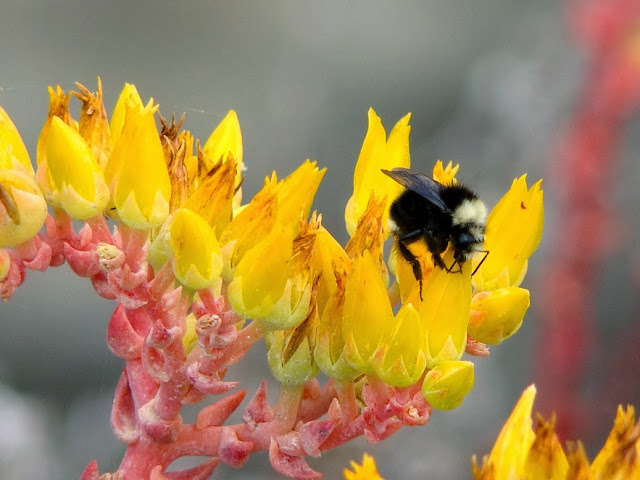