Where the Sierra Nevada Rises from the Sea: The Big Sur Coast 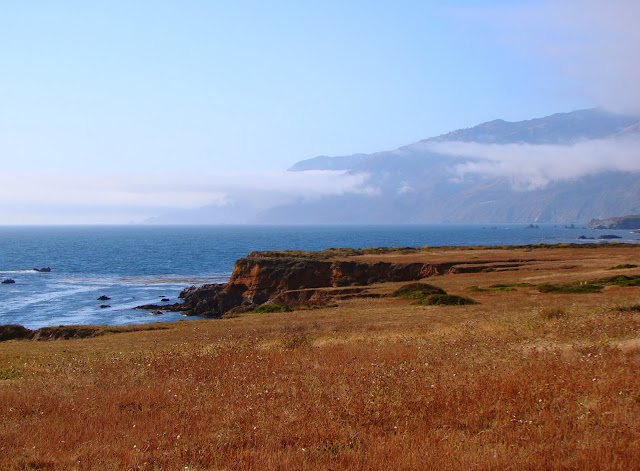 Sierra: "A rugged range of mountains having an irregular or jagged profile, like a saw blade"

Sierra Nevada: A mountain range in California with the shape of a tilted block, composed largely of granitic and metamorphic rock (from the Spanish "snowy saw-tooth range").

The Sierra Nevada? Rising out of the sea? What's that about? The Sierra Nevada, California's well-known mountain range with Yosemite and all that is 80 or 90 miles away to the east, across the Great Valley. We are at the beach, so why are we talking about the Sierra Nevada?

You can look at the mountains of Big Sur (the Grande South!) as being a sierra in the sense of being quite rugged. Our location today, Limekiln State Park, is located along the Big Sur Coast north of San Simeon. The mountains here have never been glaciated, but the peaks above the park seem to be rather inaccessible. And they rise nearly a mile out of the surf (nearby Cone Peak is 5,155 feet high and only a little over two miles from the coastline). That certainly makes it a "sierra". But the Sierra Nevada? 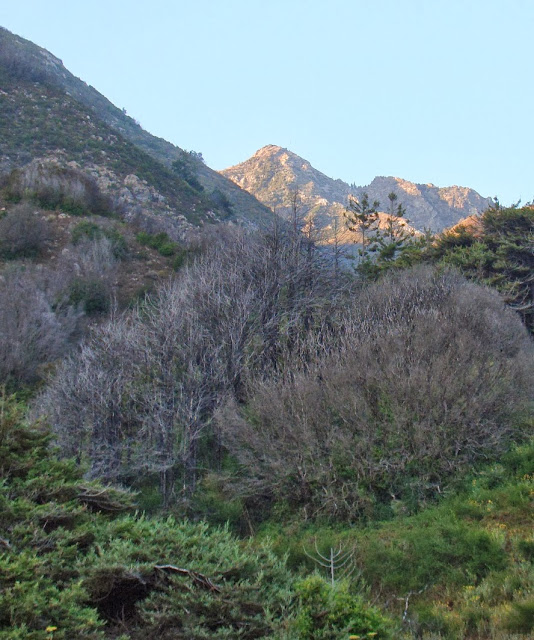 The shoreline cliffs don't seem to recall the Sierra Nevada. The cliffs are composed of metamorphic basalt and graywacke sandstone of the Franciscan Complex, rocks that formed in the trench of a subduction zone that was active up until a few tens of millions of years ago 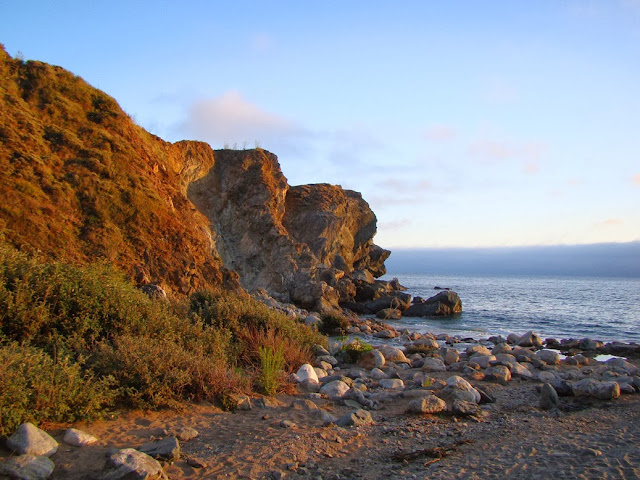 It's when you look at the boulders in the creek at Limekiln that you start to realize that there is a different sort of connection to the actual Sierra Nevada that lies so far to the east. 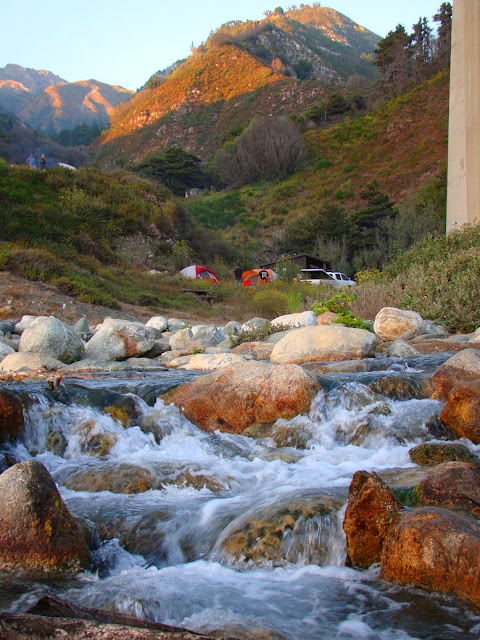 The boulders of Limekiln Creek are composed of granitic and metamorphic rocks that look a great deal like the rocks found in the southern Sierra Nevada and adjacent Mojave Desert. They are in fact the same rocks. The rocks are way out of place, a hundred miles or more from where they originated. But they are the rocks of the Sierra Nevada, and as such, the Santa Lucia Range, rising out of the Pacific Ocean, can literally be considered a part of the Sierra Nevada..

As to how they got here in Central California, one need look no further than California's favorite fault, the San Andreas. 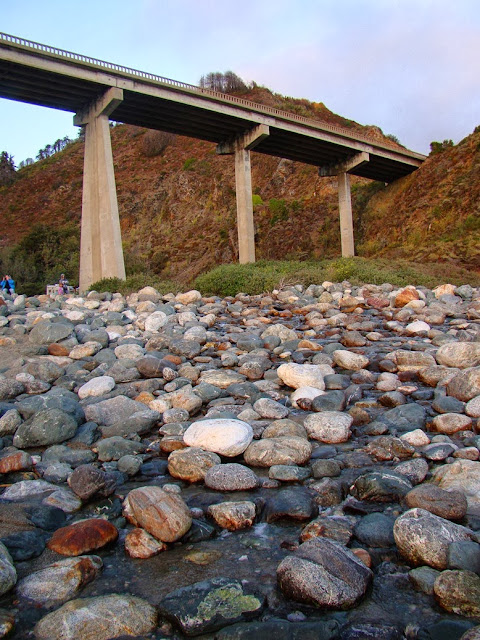 The crustal slab of granitic and metamorphic rocks of the Big Sur country is called the Salinian Block, and as you can see on the map below the block lies west of the San Andreas (granitic rocks of the Sierra and Salinia are shown in red on the map below). For the last 28 million years or so, the San Andreas has been shifting at a rate of a few inches a year. Inches multiplied by millions of years translates to great distances of offset, at least 195 miles, and possibly more. 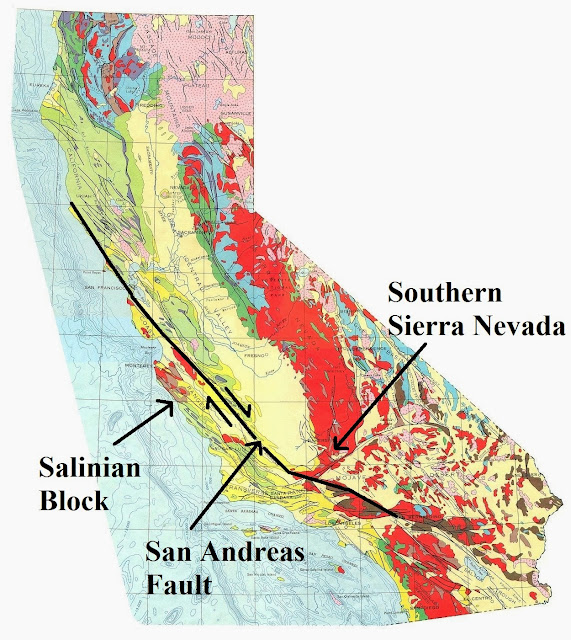 Limekiln State Park has a lot going for it these days. It is a second-growth redwood forest that has recovered much of its original beauty. The forest was originally cut down not so much for the lumber, but as the fuel for the lime kilns. 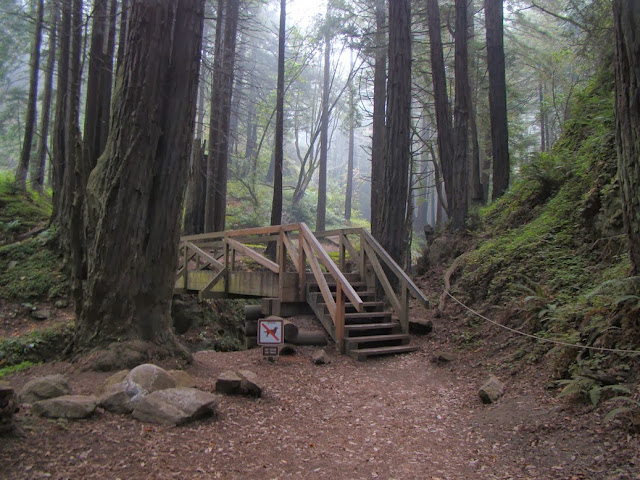 The kilns rise out of the forest like bizarre temples or alien landing beacons. They were built to process marble into lime for construction material, and were active from 1887 to 1890. After the marble was used up, the kilns were abandoned, and the forest slowly grew back. In the 1980s, a private landowner wanted to log the forest again, but many Big Sur aficionados objected and in 1994 Limekiln became a state park. The park has faced problems in its short existence, including a fire in 2008, and closure by the state in 2012 due to the budget crisis. 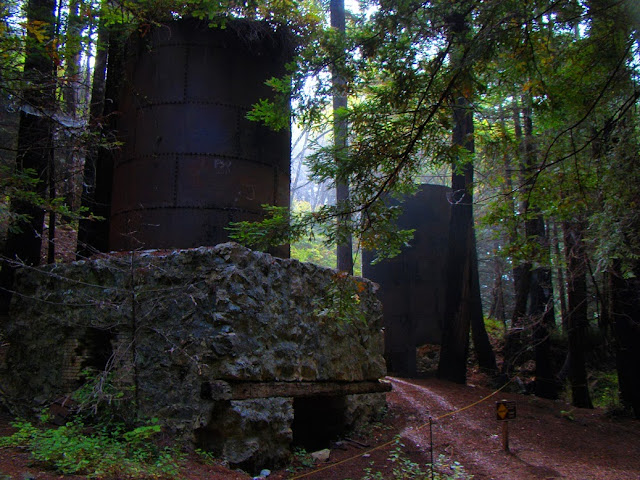 The park is back, though, and it is a pleasant place to visit. There is a modest campground with maybe two dozen sites with some sites near the beach and others up in the canyon among the redwood trees. It has a half-mile trail to the lime kilns, and a short spur trail to one of the more unusual looking waterfalls to be seen anywhere, 100-foot tall Limekiln Falls. The odd cone-shaped appearance of the fall results from the accumulation of calcium carbonate deposits dissolved from the mountains upstream. 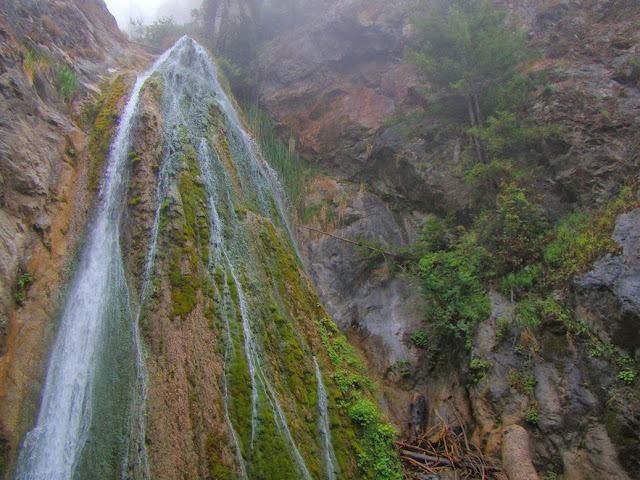 This is the first stop on our exploration of the Central California coast, the most beautiful shoreline in the world (read the intro here if you want to argue the point!)
Posted by Garry Hayes at 8:18 PM

Your blog is fantastic - I've had it in my blogroll for awhile but have been too busy with a "move" to really take time to look at it. i learn so much from what you write. I lived in Wrightwood this last year - The San Andreas runs right through town, one street or so above - i literally lived on top of the faultline. i've since moved to another mountain town.

Thanks for both of the kind comments! Sandy, I've written about the Wrightwood area a couple of times, compiled here: http://geotripper.blogspot.com/search?q=wrightwood. It's a fascinating region. I grew up in the urban wastelands of southern California, so I always appreciated a chance to escape up into the mountains down there.