What Creature of the Great Valley Could Have Snacked on Velociraptors? This one... 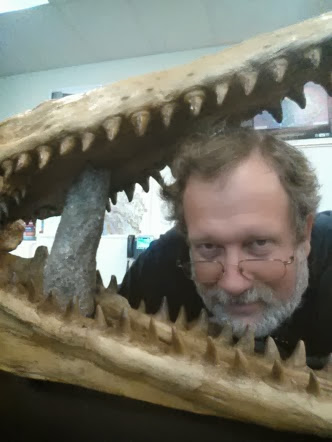 I apologize for the quality of the photographs today; they are from my phone, which is all I had when our latest display specimen arrived in our department. It's an exciting addition to the collection. We have been making a concerted effort over the last decade to raise the quality of science education in our impoverished community, an effort supported by our community with the passage of a bond act that brought about the construction of the Science Community Center at Modesto Junior College. The facility is wonderful, with a new planetarium and a fully operational observatory, as well as a vastly expanded Great Valley Museum.

My goal during this decade long project has been to increase the recognition that our county has a rich history of discovery in the field of paleontology. The first dinosaur ever found in California was discovered in our county in 1936. It was a hadrosaur, a duck-billed dinosaur, and we are still awaiting the arrival of a specimen of that creature in our department.

But what arrived today was one of the most fascinating creatures to ever come out of the sand and silt of the Great Valley Group: a mosasaur. The mosasaurs were some of the most fearsome sea creatures of the Mesozoic era. They were not dinosaurs, but instead were more closely related to large lizards. The middle skull is our recently acquired short-faced bear (Arctodus simus), one of the largest carnivorous mammals ever to exist, while the dinky little skull on the right is an accurately scaled velociraptor! 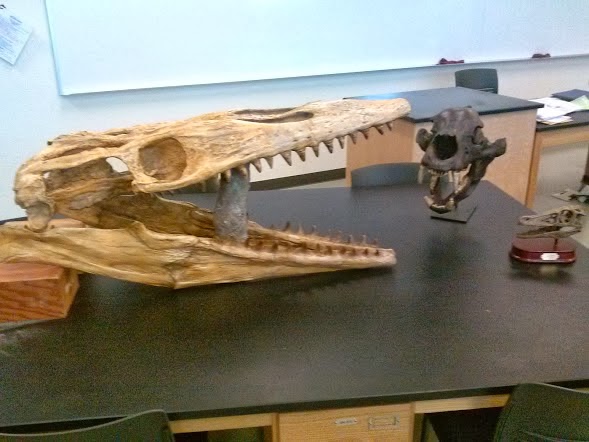 Mosasaurs arrived late on the scene, during the mid-Cretaceous Period, possibly occupying the environmental niche of the recently extinct Ichthyosaurs which had dominated the Mesozoic seas since Triassic time. Mosasaurs resemble varanid lizards (like the Komodo Dragon) and the various species ranged in size from about 10 feet (3 meters) to as much as 57 feet (17.5 meters).

I wanted a display specimen that could communicate to the young visitors in our museum and Science Community Center the excitement of the paleontological heritage of the region they live in, and having a four foot long skull of a mosasaur will go a long way towards achieving that goal. It arrived today and I was thrilled to see it. Just the same it was a terrifying creature. If it had you in its jaws, you weren't going anywhere. If you look in the picture below, you can see a second set of teeth in the back of the jaw. It was literally like something from the Aliens movies. 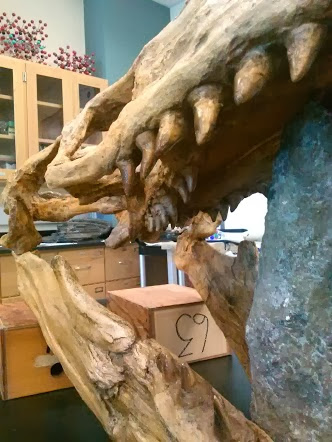 The specimen, from Taylor-Made Fossils of Missouri, is not a Plotosaurus, but will suffice to show what the Mosasaurs were like. The definitive source of information about the California mosasaurs is the book Dinosaurs and other Mesozoic Reptiles of California by Richard Hilton (who taught at MJC for a time; he is currently at Sierra College). The illustration below is a scan of his idea of the appearance of the Plotosaurus bennisoni.

If you ever are passing through the Modesto area, be sure to stop in on the west campus of Modesto Junior College and wander through the Science Community Center. Even though the museum is not slated to open for a few more months, there are many other displays throughout the complex, including our new seismometer, and very soon, a mosasaur skull on the third floor in the geology area!
Posted by Garry Hayes at 11:41 PM

What an interesting creature. I think it's good to be reminded about the animals that lived before humans.

So very cool. One doesn't often think of the Central Valley and Mesozoic giants together! I enjoy reading your occasional posts about your new science center. Modesto deserves a treat like that.

I've been reading several of your blogs and love them. I spent many hours studying engineering at the west campus of MJC back in the early 80's and my dad taught there for a couple decades. I need to stop by the Science Center next time I pass through Modesto. Thanks Gerry.