Where the Sierra Nevada Rises From the Sea: The Granitic Rocks of Garrapata State Park 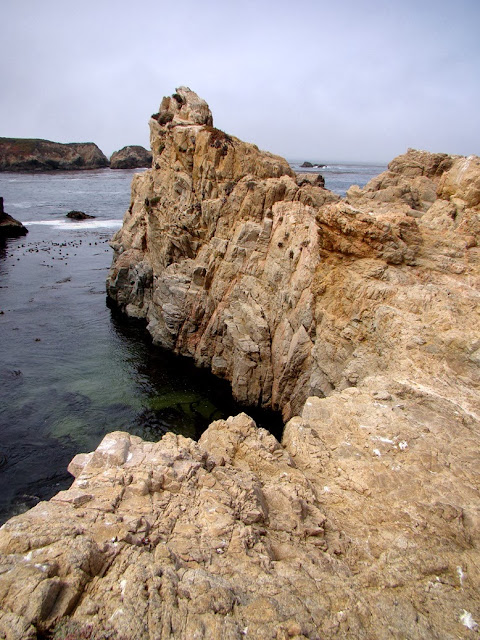 We've reached the next beach on our exploration of the most beautiful coastline in the world, the one extending from Big Sur to Bodega Bay in Central California (register your arguments in the comments about your own interpretation of "most beautiful"!). It's called Garrapata State Park, and it offers some nice shorelines carved into the granitic rock of the Salinian Block, the displaced terrane of Sierra Nevada rocks that now forms a mountain range sloping directly into the sea. 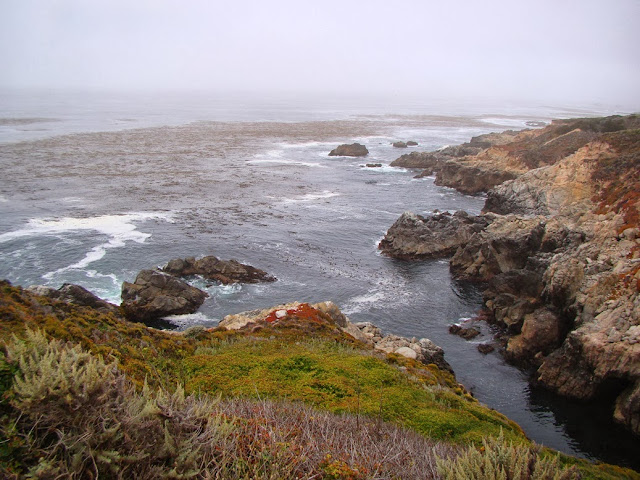 Garrapata doesn't quite have the prominence of Julia Pfeiffer Burns State Park, or Point Lobos. There are no visitor centers and no campgrounds, and in fact, few tourist facilities at any kind. No parking lots or admission booths. Just a table or two and some fine trails. It is pretty much a wilderness park, aside from the intrusion of Highway 1. 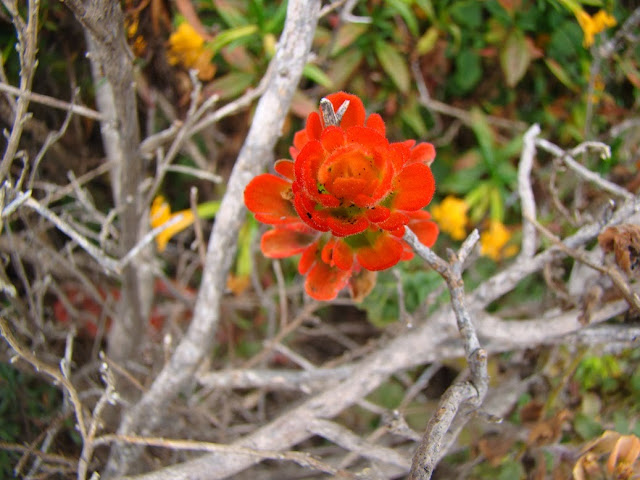 The coastal terrace at Garrapata was covered in wildflowers despite the late season when we visited. Above we can see an Indian Paintbrush. I'd try to identify it, wondering if it was the rare Monterey variety, but became aware that with more than 200 species, I probably wouldn't be successful at nailing it down. 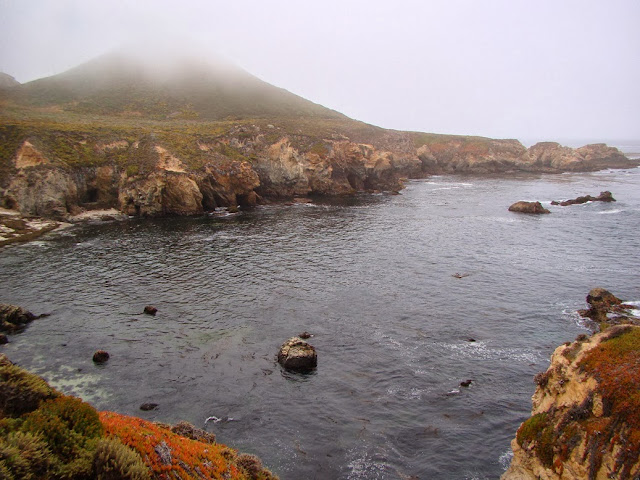 The rocky coastline reveals some of the best exposures of the granitic rocks of the Salinian Block. I use the term 'granitic' because the petrologists who study igneous rocks are rather specific when they classify the light colored grainy plutonic rocks that normal people call 'granite'. The proportions of the minerals that make up the rock (quartz, orthoclase feldspar, plagioclase feldspar) determine whether the rock is granite, granodiorite, tonalite, diorite and others. On this part of the coast, the rock is identified as the porphyritic granodiorite of Monterey. Granodiorite contains a higher proportion of plagioclase than granite has. The term 'porphyritic' means that the rock contains much larger crystals of feldspar in a finer matrix of other crystals, 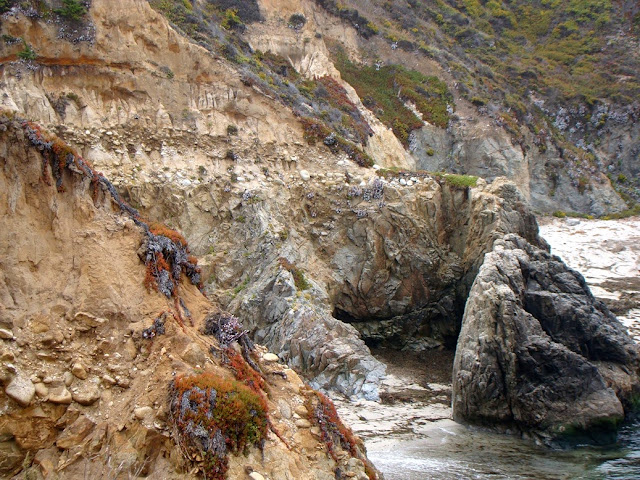 The rock formed as molten plutons deep in the crust. The rocks cooled slowly over thousands of years, allowing the crystals to grow to visible size. The granitic rock is monolithic while it remains at depth, but when it is exposed by erosion, the release of pressure allows the rock to expand. It does, but not like a marshmallow. It breaks into vertical and horizontal fractures called joints.

Ocean waves do a great job of exploiting the joints and fissures, tearing the rocks up and producing rugged sea cliffs and offshore rock islands called sea stacks.When waves impact against the rocks, they can exert pressure on the order of several tons per square foot, and air is compressed in fractures to the same degree. 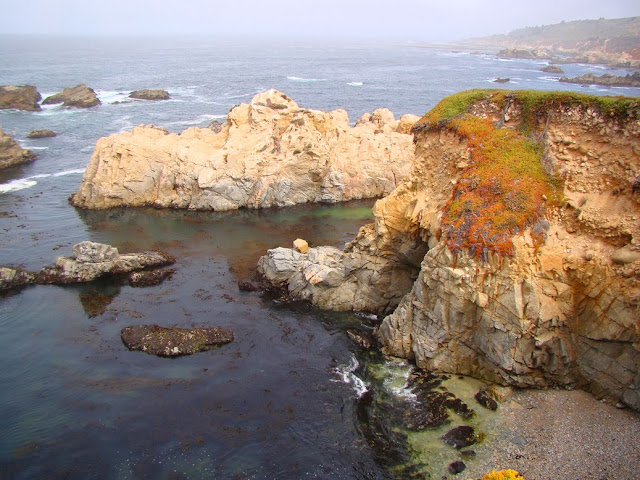 Waves can widen joint systems, forming sea caves, like those seen below.. I don't know how far the caves at Garrapata extend, but some on the north coast are hundreds of feet long, and navigable by kayak. 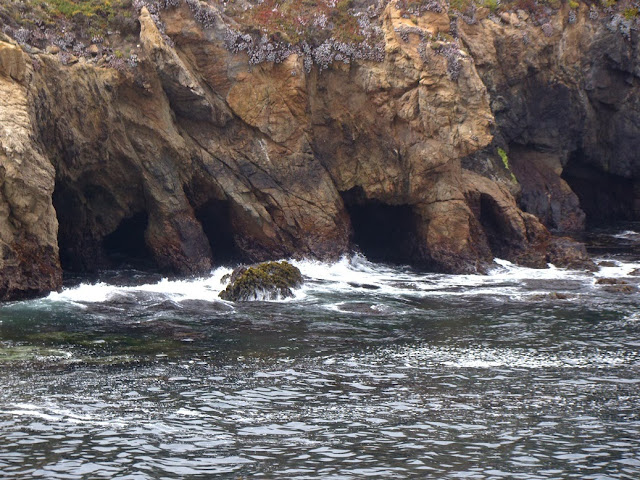 The kid in me wants so badly to explore caves like these. I don't think the California coast had much of a history with pirates, but I could imagine treasures being hidden in the backs of some of these caves. 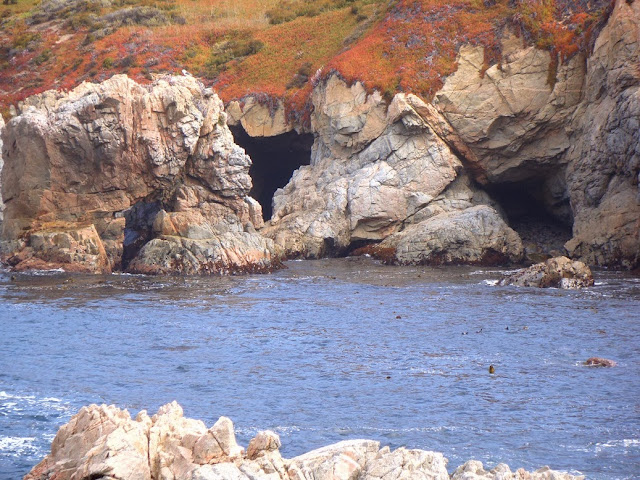 Garrapata State Park also exposes an excellent example of a nonconformity. Unconformities of all kinds are buried surfaces where erosion once took place. A nonconformity develops when plutonic or metamorphic rocks are exposed at the Earth's surface by erosion. Later, the surface was covered with sediments, in this case conglomerate deposited by streams flowing across the coastal terrace. Wave erosion later exposed the relationship seen in the photo below. 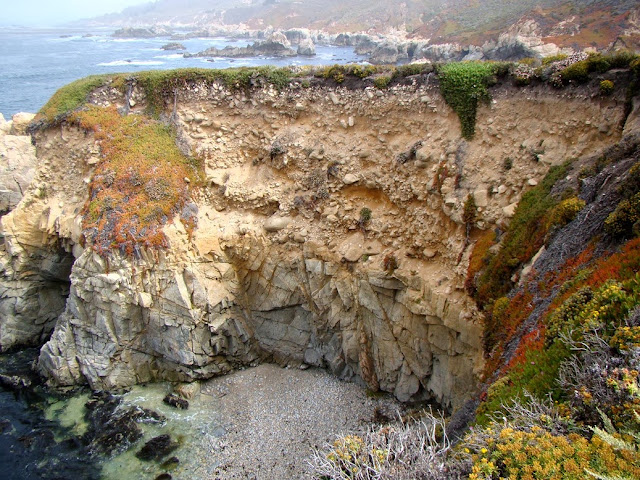 Terraces are not especially common along the Big Sur coast, but a modest one can be explored at Garrapata. Terraces result when the back and forth of wave action on a beach forms a more or less horizontal wave-cut bench. If sea level falls or the land rises, the bench is lifted above the wave zone to form a flat surface surrounded by coastal cliffs leading down to the water below. The terrace was covered with colorful vegetation due to the stable deep soils. 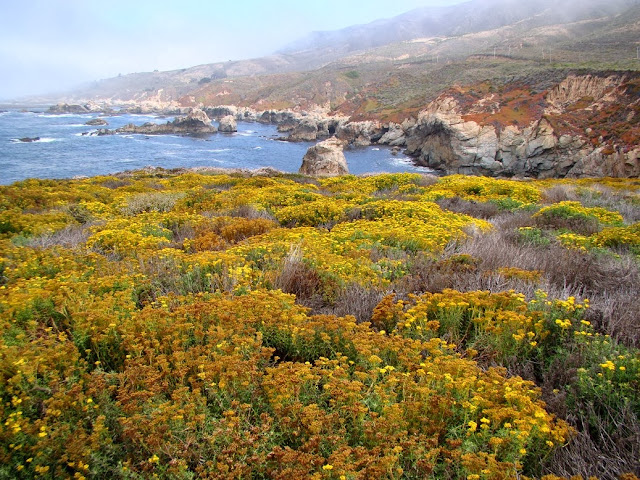 It isn't maybe fully recognized by most tourists, but every sea stack and small island on the California coast is part of California Coastal National Monument, established in 2000 by presidential proclamation. There are around 20,000 such rocks along the 1,100 miles of the California shoreline! 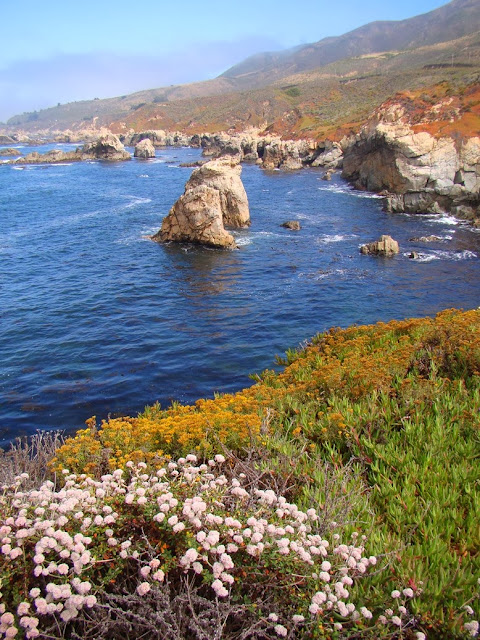 Our last little discovery of the day was a small waterfall that developed where Soberanes Creek flows across the coastal terrace and trickles into small cove. It was a colorful intersection of rock, water, and life. 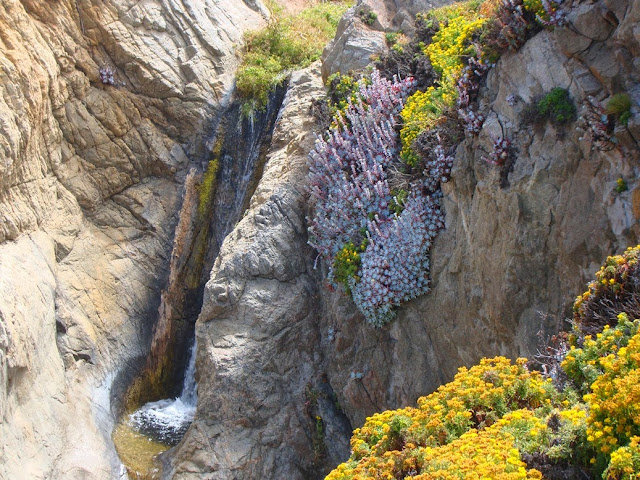 Next stop: the point of the sea wolves!

Addendum: one of my Facebook friends pointed out what a terrible name Garrapata actually is: Tick. It reminds me of Avenida de Las Pulgas near Menlo Park in the Bay Area: the Avenue of the Fleas. It's really true: all place names sound better in Spanish!
Posted by Garry Hayes at 3:28 PM

I thought that the Sierra Nevada mountains ran north/south along the Nevada/California line like up where Tahoe is in the middle of that range. The Mountains that rise up from the sea from San Simeon on the south end and Carmel on the north end is called the Santa Lucia Mountains. The mountains in Big Sur are definitely not the Sierra Nevada range. Who wrote this?

If you read the other posts in this short series, you'll see that the coastal mountains are made of the same rocks as the Sierra Nevada, and they were sliced off the southern end of the Sierra in Mojave Desert by the San Andreas fault and carried north 200 miles to become the rocks of the Santa Lucia Range.

Actually 'Tick' is appropriate for this place. It is notorious for having some of the worst tick infestation in Big Sur.

The author is correct, and qualified. The rocks were once part of the Sierra Nevada granites, and have since faulted away.